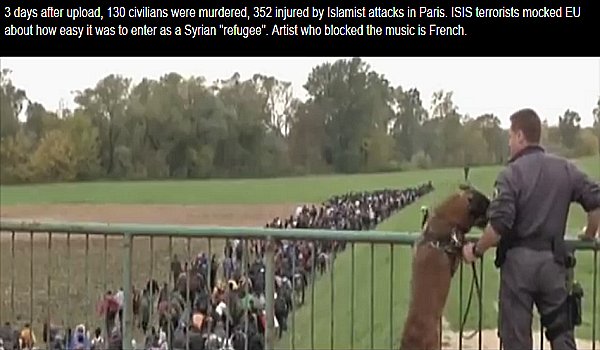 I have a lot of links as this is a much more pressing issue in Europe than we Americans might think. I will introduce the links with little commentary, and readers may examine the ones that interest them. If you read or watch all of these links, you will understand the extent of the crisis that is now occurring within Europe. Most of the links are short. The first one is the longest.

The first link was sent to me by a military source in Europe. The link was described as being originally in French, but then later translated into English. Obviously, I cannot vouch for the accuracy of the English translation, but the link has a montage of visual footage from all over Europe showing just how bad this situation really has become. I urge all readers to watch this video. Can you imagine how Americans would feel if throngs of thousands of Muslims were traipsing through your backyards and filling your neighborhoods?

The second link shows how a Muslim man tried to impose Islam on a Dutch audience. At a concert in Holland, he seized the microphone and began spouting Islamic propaganda. The orchestra members walked out on him and security personnel had to remove him from the stage. This link was sent to me by a second source, and the source mentioned to me that the Netherlands’ Queen was in the audience so this Islamic interloper was also trying to impose Islam on the Queen of Holland.

The third link involves how Islamic immigrants are raising the crime rate in Sweden. The fourth link (from Russian media) reportedly shows Swiss police firing rubber bullets at pro-refugee protesters, which speaks volumes about the Swiss views on this matter. The fourth link is about a large anti-Islamic immigrant rally in Germany and mentions the emergence of an Islamic “sharia police” in Europe. The fifth link is about Hungary building a fence to keep Islamic immigrants out of their nation, and the sixth link is about Finnish support for the Hungarian action. The seventh link reports that German hospital facilities are being overwhelmed by Islamic refugee issues. The eighth link indicates Poland only wants to take in a limited number of Syrian Christian refugees. The ninth link reports that Slovakia, the Czech Republic, Poland, Hungary and Bulgaria are “firmly against” accepting any EU-mandated allocation of Islamic immigrants into their nations. The tenth link adds Romania to the above list of nations not wanting Islamic immigrants and mentions the growing desire on “keeping Europe Christian.” The eleventh link is about a Polish nationalist party taking control of the Polish government. It cites the desire of the Polish electorate to protect Poland’s Catholic values from Islamic pressures, and it further cites the rise of right-wing parties in Sweden and the Netherlands to counter Islamic immigration. The recent first-round of the French elections saw the anti-immigrant National Front Party winning a national election round for the first time ever. The twelfth link reports that German Chancellor Merkel is facing a growing revolt among her conservative allies and especially from her Bavarian CSU-party allies because of Merkel’s seeming willingness to admit limitless numbers of Islamic refugees into Germany.

Clearly, pushback against the Islamic immigrants is occurring all over Europe. It may result in many Islamic immigrants being sent back to Islamic nations and out of Europe. This is already happening. Norway’s new conservative government has been shipping Islamic immigrants out of the nation (thirteenth link), and its crime rate is dropping as a result of such action.

American readers may be thinking that they are relieved that “it isn’t happening here yet.” Think again. The fourteenth link reports that the Obama administration is sneaking Muslims into the USA via airplane charters and bypassing normal security/immigration rules. It features an interview in which New Jersey Governor and GOP presidential candidate Chris Christie verifies that this is actually happening. The final link is a “must” watch. It features Fox News host, Judge Jeanine, “telling it like it is” on this topic. Her comments will leave many readers cheering, I believe.

Deuteronomy 28 contains a prophecy that nations which forget and abandon God and his laws will be beset with increasing curses. One of these curses is that “the stranger that is within thee shall get above thee very high, and thou shalt come down very low.” The Islamic “invasion” of refugees into once-Christian nations fulfills the prophecy as Islamic culture gradually supplants the once-Christian cultures of European nations.

I’d like to conclude with an observation, and I’m surprised no one has mentioned it to my knowledge. The tidal wave of Muslim immigrants pouring through the Balkans into Europe seems to have no interest in staying in the Balkan nations of Kosovo, Albania and Bosnia-Herzegovina. These are nations with  majority-Muslim regions. If Muslim immigrants from the Mideast or elsewhere want to reside in a Muslim nation with familiar Muslim culture, why aren’t they pouring into these nations with large Muslim regions? However, they seem to be specifically avoiding these Muslim regions of Balkan Europe. Why is this the case? It seems logical to conclude that they do not want to burden Islamic nations and peoples with their massive costs and needs. They want to journey deeper into traditionally-Christian, European nations and burden them with their costs and needs. Do you see any other explanation? If there is no other explanation as to why the Islamic immigrants are avoiding European Muslim nations in the closer Balkan region and pouring into more-distant Christian European nations, this does appear to be a cultural invasion to impose Islam on European nations. Given that the Obama administration is apparently sneaking Muslims into the US already, it may only be a matter of time till the USA faces a similar crisis and backlash. The American backlash may hit just in time for the 2016 US presidential vote.