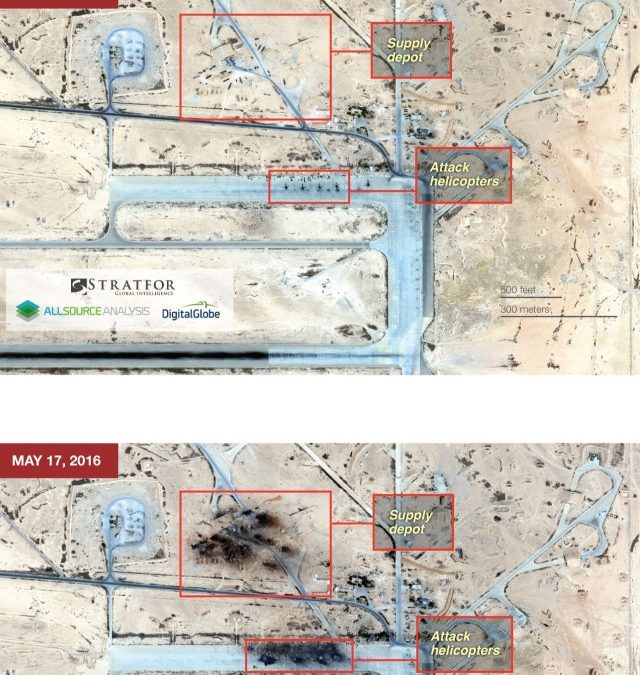 It is being reported that ISIS forces have successfully launched a very damaging raid on a joint Russian/Syrian air force base in central Syria. The attack wiped out an entire Russian attack helicopter unit of four helicopters that were deployed to that base, and a very large number of supply and weapons storage facilities were also wiped out. A Syrian warplane was also apparently damaged beyond repair. This attack reveals a very high degree of sophisticated military skill. Indeed, its aftermath looks very much like a highly trained special forces unit attacked this Russian/Syrian airbase.

It appears that the attackers had precise GPS coordinates for all targets to be attacked, carried the attack out quickly with military precision and were able to escape afterwards without being either detected or apprehended. Indeed, the aerial/satellite photos in the two links reveal “before and after” photos of an attack of such skill and precision that one does wonder if: (A) ISIS had the assistance of a nation state in carrying out this attack or if (B) the attack was actually carried out by the special forces of a nation state and that the claim by ISIS to be responsible for the attack was a “false flag” planted story. Check out the aerial reconnaissance photos in the links and decide for yourself what you think happened.

The first link, from the BBC website gives details about the attack, and the second link, from Stratfor’s website, includes a series of what appear to be satellite reconnaissance photos of the attacked air base. Notice the pockmarked and blackened parts of the air base that were attacked. The attack’s aftermath reveals that the Russian/Syrian targets hit were selectively taken out quickly with very accurate “artillery” shells. I see very few, if any, misses in the attack pattern. Do the special forces units of major powers have heavy mortars which can launch rounds that are targeted based on the GPS coordinates of the targets? I would assume the answer would be “yes,” and, to me, that appears to be what happened. I doubt crazed Jihadis could have accomplished this mission with such surgical accuracy and precision. If this attack was carried out by mortars with GPS targeting systems, either a nation-state supplied ISIS with such weaponry or this attack was carried out by the special forces of a nation state and ISIS didn’t do it–these are the possibilities in my opinion. To obtain such precise GPS targeting solutions, the attackers had to obtain them in one of two ways–either by aerial or satellite reconnaissance or by having one or more agents “on the inside” who stood right next to each target to harvest the GPS locations of every target to be hit. Since parked helicopters are movable targets, any GPS-“tagging” of them would have had to be done shortly before the attack was carried out. I’m sure the Russian military and intelligence community is actively and exhaustively considering all these questions and possibilities as well.

The satellite-confirmed attack damage patterns show that there is a lot more to this story than is currently being reported. If irregular, militia-like Jihadis carried out this attack and fired projectiles with only a dead reckoning, “eyeball-only” system, there would have been plenty of misses on the aerial aftermath photos. Such misses are not evident in the photos. All blasts were right at the specified targets. Some unknown combat team with very high military skills, sophisticated GPS-targeting mortars (I think mortars would be the likely man-transportable weapons used) and a high-efficiency insertion/egress capability carried out an act of war against Russian military forces inside Syria. I see no other conclusion. If ISIS did this, they have been trained by an unknown nation-state to have capabilities far beyond what anyone thought possible. If ISIS did not do it, then everyone in the world’s intelligence community will be seeking answers to identify the origin of the attackers. I think someone just sent Russia a very strong message. No doubt, Russia will leave no stone unturned to find out who sent the message.

In my view, one conclusion is clear: this military strike against Russian forces inside Syria just raised the stakes considerably and has increased the odds of a larger regional war breaking out in the Mideast region.