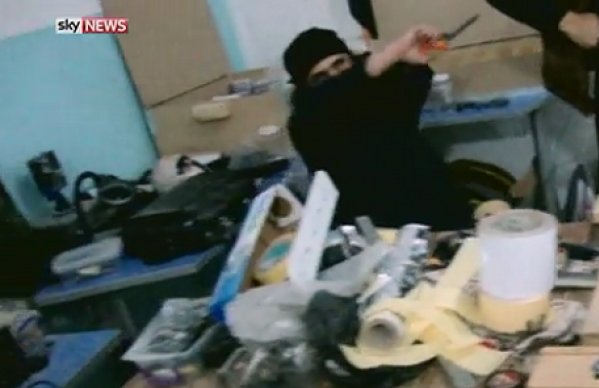 There is a surprising new development in the war of ISIS on the civilized world that all people should realize is happening. It has been revealed that ISIS has a high-tech, weapons-development facility that is preparing to deploy new weaponry in its war of Islamic terrorism against just about everyone else on the planet. The first four links [1, 2, 3, 4] offer different perspectives about this new ISIS weapons laboratory and manufacturing plant. You may read the links to get the full information, but I wish to focus on two of the weapons being developed. One is that ISIS is manufacturing “heat-seeking surface-to-air heat missiles.” While these may have some usefulness against attacking helicopters, these kinds of weapons would be ideal terrorist weapons to use against defenseless civilian airliners. The second type of new ISIS weapon is that they are developing the ability to either manufacture or hijack the technology of self-driving cars to turn them into “suicide vehicles.”

The heat-seeking surface-to-air missiles are an ideal weapon for shooting down civilian airliners. If you have some ISIS terrorists in various nations with these missiles (likely shoulder-fired), they can sit in a pick-up truck outside an airport security zone and fire the missiles at civilian airliners while they are landing or taking off from runways at major airports. Civilian airliners would be “sitting ducks” for such missiles. Indeed, would Air Force One or the airliners of other heads-of-state be vulnerable to these heat-seeking missiles? As far as I know, only El-Al Airlines is reported to have defensive capabilities vs. heat-seeking missiles. If other airlines have such self-defense capabilities, they are not talking about it. What this means is that all the billions of dollars spent at airport security locations to have people take off shoes and belts, throw away water bottles, go through x-ray machines, etc. is 100% useless against such a new ISIS tactic. Like generals “fighting the last war,” the USA’s air security measures are designed to stop attacks by such things as box-cutters or other items to be smuggled on board an airliner. The new ISIS weaponry shows they are developing a means of attack to totally bypass and nullify the usefulness of all TSA measures to protect the air-traveling public. To combat ISIS terrorists (or any other kind of terrorists), police and security forces need to have mobile patrols around and outside an airport’s perimeter looking for suspicious vehicles that could contain shoulder-fired missiles.

Secondly, ISIS is reported to be developing driver-less car technologies to be used by them to launch “suicide car” attacks. We are all familiar already, I believe, with media reports on how easily driver-less cars can have their systems hacked so outsiders can seize control of such cars and leave passengers inside the cars unable to control it. The fifth link documents how easy it is at present to hack into a driver-less car’s technology and divert it to a different purpose. It reports a mere $60 and some know-how can accomplish this. Think what can be done if ISIS deploys a car-hacking technology which can seize control of hundreds of cars at once and drive them simultaneously into high-value targets all over the world. Indeed, if they can deploy their own driver-less cars filled with explosives or poisons, they could drive them into a high-value target and explode key infrastructures and kill masses of people. You won’t see me buying a driver-less car anytime soon. Until their technologies can be made invincible to terrorist hackers, why would anyone buy one?

I have a question. If the media knows about ISIS high-tech weapons facilities and can even get photos taken inside of them, surely the CIA and other western intelligence agencies know where these facilities are as well. Why aren’t they being bombed out of existence? Don’t any western heads-of-state care about the safety of their citizenry or the traveling public? These facilities should have been bombed into pieces months ago. It was Obama who foolishly labeled ISIS as a “B-team” threat and who declined to attack ISIS training camps, ISIS oil facilities and tanker trucks and high-value ISIS targets until the Russians and French started bombing them and embarrassed Obama into finally taking at least some meaningful action vs. ISIS. The final link is an appropriate sidebar to this post. Now that ISIS is developing ways to turn driver-less cars into terrorist weapons, the Obama administration is encouraging the advanced development of driverless cars! Based on the information in the first four links, that will make it easier for ISIS to have more driver-less cars on the road to hack into for harmful purposes.

The Apostle Paul warned that “perilous times” would come in the latter days (II Timothy 3:1). It appears that as technology becomes more pervasive, terrorists will use those technologies to make life ever more “perilous” for law-abiding citizens of all nations. I have another thought. Revelation 13:16-17 foretells the final global “beast” power will develop technologies to be able to not only monitor, but control global financial transactions. We know the NSA and other intelligence agencies as well as private mega-corporations are trying to develop mass informational dossiers on everyone by “metadata” spying on social media sites of all kinds. The final beast power will apparently have control-freaks at the top of its structure. If they could get everyone into driverless cars, those cars could be built with control systems that have “cyber back-doors” built into them so anyone’s car could be taken over by an intelligence agency and its occupants driven to a site where they can be taken into custody. That would be useful in taking drug-dealers and criminals into custody, but the same technology could also be used against any innocent segment of society.

Matthew 24:37 prophesies the latter-days would be a mirror image of Noah’s pre-Flood world. The more that technological developments change our society into a high-tech civilization unimaginable just a few years ago, I think we are advancing into the kinds of technologies that were commonplace in Noah’s pre-Flood world. Noah’s pre-Flood world steadily became so sinful and reached a point of such terminal wickedness that God finally intervened to kill everything except for eight people and the lifeforms on-board the Ark (Genesis 6). An oft-forgotten prophecy in Malachi 4:4-6 warns that unless God sees a serious return to his values in the latter days of our age, our civilization also risks provoking a similar Divine annihilation. That prophecy does foretell God will do a work of “Elijah” in the latter days to try to induce mankind into repentance. Matthew 24:14 also prophesies such a “witness” message will occur in the latter days. It is my firm belief that the “Elijah” or “witness” message will be performed by the Two Witnesses of Revelation 11 who will be given unimaginable and unprecedented Divine power to plague the world during the latter days to try to bring mankind to its knees in repentance. Their eventual arrival is certain, but the timing for their arrival is unknown. I hope they will be sent by God soon as the need for them is great. The world isn’t even remotely ready for their arrival. Are you?