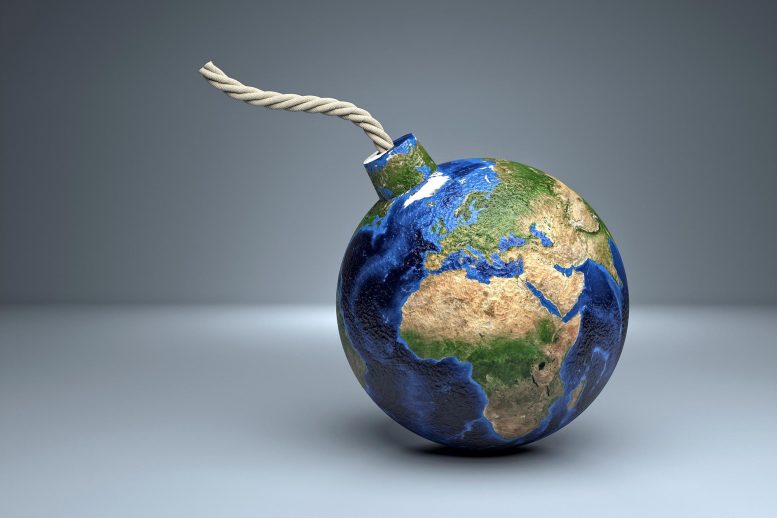 Media reports and various pundits opine that Russia’s war against Ukraine is in a temporary pause as Russia relocates its badly-mauled army units from the north of Ukraine in the Kiev sector to the far eastern parts of Ukraine to prepare for an imminent attack on the Donbas region of Ukraine. The evidence that we have as I write this does support that conclusion. However, Russia faces some very serious concerns. Russia expected an easy and quick victory in its Ukrainian invasion, but what it got was a costly war of attrition. Its forces were badly mauled by Ukrainian forces using NATO-made anti-tank and anti-armor weapons as well as NATO anti-aircraft weapons. Reports indicate that Russia has lost perhaps 15,000 soldiers killed, over 600 tanks, as many as 2,000 armored vehicles, trucks, hundreds of warplanes and/or helicopters, etc. Many reports surfaced about Russian soldiers unready to fight, and a failure of Russian logistical support occurring on an epic scale. There have been reliable reports of many Russian tanks and armored vehicles being captured by the Ukrainians as Russians simply abandoned their equipment and fled.

What makes Putin and his generals think these dispirited and defeated Russian troops will perform any better if they are told to invade Ukraine from the east (where Ukraine has had fixed defensive positions for 8 years of fighting against pro-Russian separatists armed and led by Russians?). Maybe their commanders will threaten to have anyone who flees shot for doing so. Think what that will do for Russian morale. Russia was counting on a swift victory so its conquest of the Ukraine would be a fait accompli before the West could organize any meaningful resistance. Now that the full cruelty of Vladimir Putin and the Russian leaders has been on display for the entire world to see, NATO nations have coalesced to support Ukraine and many NATO nations, particularly Germany, have been shocked out of their passivity and are embarking on major rearmament programs. Russia has just suffered another major blow. The Russian heavy cruiser, Moscow (in English), was heavily damaged and sunk in the Black Sea. It was the flag ship of Russia’s Black Sea fleet and it is my understanding it was the largest surface naval combatant in the entire Russian fleet (first link and second link). Russia maintains it sunk due to an accidental explosion, but the Ukraine insists its anti-ship missiles hit and sunk this Russian warship. Since the ship was operating in a combat zone, its damage-control alert status should have been at the highest level–making Russia’s claims dubious. I’m inclined to believe the Ukrainian version of why it sank. That the entire crew of the ship had to be suddenly “evacuated” argues that it was in danger of sinking very soon after some major event occurred.

In my blog over the past few years, I suggested that Russia and China both needed a regional war to test their military personnel and weaponry against Western military systems. Both nations have untested weaponry and lack soldiers with combat experience. They both had “parade ground” militaries. Russia thought it could defeat Ukraine quickly, but it was shocked to find out its military personnel and weaponry were not at all ready to fight against Western weaponry. This has likely given China reason to hold back on invading Taiwan as it might have the same rude surprise as Russia experienced in any such war. After all, Russia had only to drive its tanks across the border and go to war immediately. China would have to send its ground forces in slow transport ships a hundred miles across the Taiwan Strait to even get to Taiwan. China’s logistical challenge will be far more difficult than Russia’s was, and Russia failed utterly to pass that test.

However, Russia is still acting with belligerence toward its NATO neighbors. The third link reports that Russian warplanes are coming so close to NATO airspace that NATO fighters have to intercept them. This action only serves to further wake up the NATO nations even more to the dangers posed by Russia. The fourth link details the nations of Europe which are quickly boosting their military defenses now that they have been “shocked” out of their blindness to the real menace posed by Russia. The link touches on the growing likelihood that Finland and Sweden will soon join NATO due to the Russian invasion of Ukraine. The fifth link and sixth link examine the Finnish and Swedish political situations regarding their nations joining NATO. Finland seems especially likely to apply for membership within weeks, not months. Russia has threatened both Finland and Sweden to try to forestall them from joining NATO, but those Russian threats are likely to push Finland and Sweden even quicker into joining NATO. Both nations face a simple threat evaluation: Either they stay out of NATO and have to face Russia alone as Ukraine is doing, or join NATO and have 30 nations joining them in warfare vs. Russia if Russia invades Finland or Sweden. It is a “no brainer” comparison–joining NATO offers far greater security than staying out of NATO. When/if NATO has to fight a war with Russia, NATO war-planners should have mechanisms in place to take out Russian forces in Kaliningrad with hours, if not minutes. Kaliningrad is a piece of Russia that is not contiguous to the rest of Russia and its location on the Baltic Sea and within missile range of many European capitals makes it a top-level threat to NATO nations. NATO planners surely have missiles, artillery, etc. aimed at Kalinigrad’s military weaponry and infrastructure to eliminate them the instant hostilities begin. It would be criminal neglect not to have such plans in place.

I do have a growing concern about NATO’s ability to fight a war of any length. NATO nations are shipping so many of their reserve weapons stocks to the Ukrainians that NATO runs the risk of depleting its own war reserves of critical weapons. The seventh link analyzes this very danger. No nation’s war industries (with the possible exceptions of China and Israel) are in any condition to create a quick “surge” of new weapons production to fight a major war if one breaks out. For most nations, they would “have to go to war with the military you have on hand” once a war starts. Russia also has strong disincentives to dragging out the Ukrainian war. Russia has lost an immense amount of its military inventory of weapons with little to show for it so far. Putin very likely is looking for a way to “declare victory” and end the war so punishing economic sanctions against Russia by much of the world can be lifted. However, Russia’s decision to destroy so much Ukrainian civilian housing and infrastructure means the issue of Russian reparations to rebuild those structures will have to be resolved before economic sanctions against Russia are eased or ended. Overseas Russian assets such as frozen gold reserves, sovereign wealth funds, oligarch accounts, bank accounts, etc. should have to be given to the Ukrainians to rebuild their cities before Russia can receive any of its frozen overseas assets.

Now lets consider China and Taiwan. Taiwan has seen how well NATO weaponry works vs. Russian military platforms so it can likely assume its Western military equipment will work just as well against China’s weaponry. China could, however, choose to invade Taiwan before Taiwan can strengthen itself with more American weaponry. The eighth link relates that Taiwan has paid for over $14 billion in US military equipment it has not yet received. The ninth link cites a US Senator as stating the USA must arm Taiwan “as quickly as possible.” In a remarkable development, six US lawmakers secretly visited Taiwan to meet with the island-nation’s president (tenth link). This is a de facto nation-to-nation kind of visit that drives the Communist Party of China berserk as they are doing all they can to isolate and de-legitimize Taiwan and its independent government. The chances of a war in the Taiwan-China region is still very real.

So, is World War III imminent? I think the answer is “no,” although the Russian-Ukrainian war could spread to include a wider geographical region. In a biblical prophetic perspective, a “World War III” is usually understood to mean the war described in Ezekiel 38-39 and Revelation 19 as occurring at the very end of this current age. As I see it, there are too many major biblically-prophesied events which must transpire before the age-ending war of Ezekiel 38-39 and Revelation 19 can occur. The Two Witnesses of Revelation 11 have not performed their 1260-day mission, and the “beast” power’s 42 month reign has not yet even begun. The current global political/financial system called “Babylon the Great” in Revelation 17-18 has not yet collapsed although it is increasingly tottering. If the future unfolds according to what we can understand about biblical timetables, the end of the age is not yet upon us. We are currently in the time of “wars and rumors of wars” which Matthew 24:6 foretold would characterize the end times of this age.

For more information about the above biblical subjects, please read my articles, Are We Living in the Biblical Latter Days?, The Two Witnesses and What Ezekiel 38-39 Reveal about a Future World War III.