Is Trump’s Recent Warning to NATO Waking up Its Members? 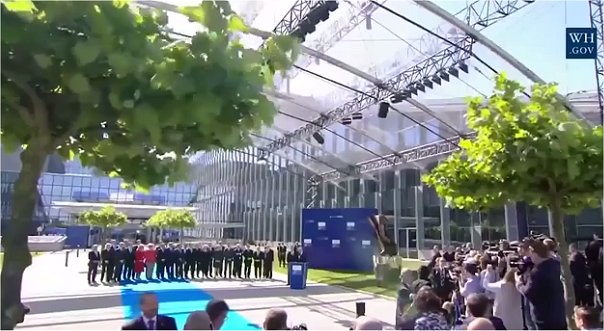 The Leftist mainstream media was horrified when US President Trump attended the recent NATO meeting in Europe and “called out” the NATO nations for not living up to their commitments to spend a minimum of 2% of their national GNPs on defense spending. One would have thought, based on the Leftist media coverage, that he had said something false or inaccurate. In fact, Trump did the NATO nations (and their people) a favor by publicly drawing attention to the deficiencies in NATO members’ military spending.

NATO is, after all, a military alliance pledging its members to defend all its member nations if any of them are attacked. To function as a credible military alliance, all members must have credible military forces. For too long, American presidents and everyone else were content to have the NATO members gather and have banquets and self-praising press conferences and media press releases even as the NATO alliance has been steadily weakening its military power. Trump publicly drew unwanted attention to this glaring problem. He publicly proclaimed that 23 out of 28 NATO nations are not living up to their pledges to spend 2% of their GNPs on military spending. The reaction of European leaders confirmed that they did not at all appreciate having the truth about their neglect of their military spending pledges publicized (first link). After Trump’s proclamations and demands that they live up to their pledges, there was no way the European nations could sweep their military deficiencies “under the rug” any longer.

How bad is the problem? The second link includes a graphic showing the relative spending levels of each NATO nation. Not surprisingly, the USA, with 3.61% of GNP spent on military needs, devoted the most to military spending. Surprisingly, “bankrupt” Greece came in second by devoting 2.38% of its national GNP to military spending. This shows remarkable and commendable commitment to NATO by Greece. If Greece, which is essentially in an IMF/EU receivership for fiscal problems, can meet its military spending obligation, what is the excuse why other well-off NATO nations are not doing so? The other three nations which are meeting the 2% of GNP spending threshold are the United Kingdom, Estonia and Poland. No one expects Luxembourg to become a military powerhouse, but such large European nations as Germany and Italy are some of the worse offenders in not meeting their commitments. France isn’t meeting its commitment either, but it is not doing as badly as Germany and Italy. Nations spending next-to-nothing (less than 1%) on their military defense budgets are Canada, Slovenia, Spain, Belgium and Luxembourg. Given that Russia is improving its military forces and has gobbled up the Crimea and perhaps a couple of provinces of Eastern Ukraine by military force and is deploying its military forces into the Mideast; the NATO nations should honestly ask themselves if a 2% spending threshold is sufficient for the common defense.

The third link states that some NATO nations are going to start living up to their military spending obligations. Reportedly, Romania will meet its obligation this year while Latvia and Lithuania will do so next year. It also offers statistics that Poland is undertaking a major increase in its military equipment spending. Hopefully, the laggard NATO nations will start paying attention to their military defense obligations. Poland should be recognized for meeting its NATO spending obligations and building up its military forces further. If there is one criticism of the USA’s military spending that could be made, it is that a significant percentage of its military budget has been effectively “thrown down rat holes” in endless wars in Afghanistan and the Mideast. One could ask: How much is the USA really spending on common defense needs for NATO if the expenditures for past and ongoing wars in Afghanistan and the Mideast are deducted from its total? As all know, those defense priorities were made by Presidents Bush and Obama, not President Trump. Trump is pursuing a real defeat of ISIS in the Mideast so hopefully that region of military expense will be over soon. The war in Afghanistan seems endless and may end up being a complete and expensive exercise in futility, as was the war in Vietnam. I will say this for the Russians: They realized that in their Afghan war that they were “throwing good money after bad” and simply got out. The USA may soon be facing such a moment as well.

What NATO spends on its common defense has biblical prophetic implications. As long-time readers of this blog realize, The prophecies in Ezekiel 38-39, Zechariah 14, Revelation 19-20 and others all foretell that a global World War III will occur at the end of this age. While Zechariah 14 addresses the Israeli/Mideast theater of this future age-ending war, Ezekiel 38-39 reveals that the modern nations descended from the ancient ten tribes of Israel (many of them NATO nations) will be the targets of a massive global invasion launched by the alliance of Russia, China, Iran. etc. [In biblical terminology, “Judah” identifies the Jews/Israelis while “Israel” identities the non-Jewish ten tribes of Israel. Many biblical scholars, because they do not comprehend this critical difference, incorrectly apply Ezekiel 38-39 to the Jewish nation called “Israel” even though “Judah” is nowhere mentioned in Ezekiel 38-39.]

The NATO nations (and all their western allies) will all be attacked by the Gog-Magog alliance of Russia, China, Iran, etc. at the very end of our age. Because the factual reality of the Bible’s accuracy is not taught in our modern schools and any churches, the western world is largely blind to its future danger and; therefore, they are not preparing for it. If they realized the Bible’s accuracy, they would realize the Bible “tips them off” to many of the future World War III’s campaigns and the future strategies of their enemies, they could prepare for it more knowledgeably now. However, the nations are not likely to wake up to to the fact they will face a certainty of war in the future. The prophecies indicate the western world will be shocked and surprised when they are attacked in some future year. However, you need not be surprised. For more detailed information on what the Bible prophesies is going to happen to the world’s nations in the future, please order and read my books and read my free article, The USA in Bible Prophecy (to understand why the western nations are called “Israel” in the Bible). I also suggest reading my article, Are We Living in the Biblical Latter Days?, to confirm that the Bible’s “latter day” prophecies do apply to our modern world.