Is the Mideast Sliding Toward a Wider War? 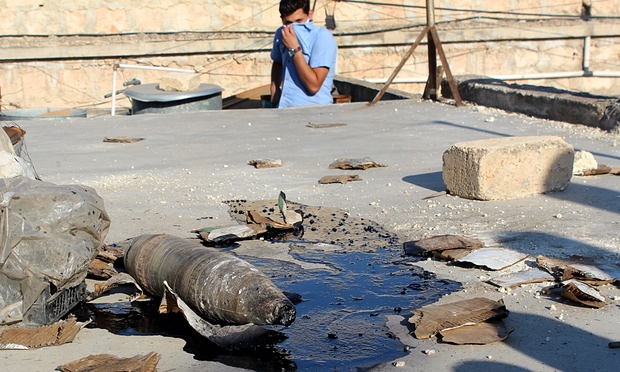 Just when you think the Mideast can’t get any stranger, it gets stranger and more dangerous. While a tentative cease-fire was recently proclaimed by Russia and American leaders, events indicate the region is sliding toward a wider war. There is a report that ISIL used mustard gas (a chemical weapon) vs. Kurdish forces during the fighting in 2015 (first link). Turkey wants a wider war in the region as it calls for more ground forces to be inserted inside Syria to depose Syrian President Assad (second link), but Turkey also is fighting the Kurds, who have proven to be the best “boots on the ground” in the war against ISIL. Turkey’s government has stated they have no intention to stop using Turkish artillery to shell the Kurdish forces in Syria who are fighting ISIL (third link). Does this not put Turkey, a NATO member, in the position of being the ally of the ISIL terrorist organization? If Turkish airplanes attack the Kurdish anti-ISIL positions inside Syria and Iraq, does it not make the Turkish air force the de facto ISIL air force? The fourth link details more about Turkish strikes and mentions the possibility of a Saudi-Turkish ground assault force entering Syria. It also reports the Kurds are making steady advances against ISIL and radical Islamist militias, apparently much to the chagrin of Turkey.

It would be a bit of a surprise if Saudi Arabia invaded part of Syria as that would broaden the war and the Saudis are already militarily committed inside Yemen. It would also likely bring the Saudis and Turks into direct conflict with Russian and Iranian forces. Turkey seems to be spoiling for a fight against the Russians ever since they shot down a Russian warplane. The fifth link adds that the resurgent Syrian army is driving on Raqqa, the ISIL headquarters city, and that the US Secretary of Defense expects commandos from the UAE and Saudi Arabia to help take Raqqa. Obviously, they won’t be on the same side as the Syrian/Russian forces also converging on Raqqa, so there is a possibility of many opposing groups converging on Raqqa at the same time.  This could easily escalate into a wider war. Can you see how confusing this whole situation is becoming, and how close it is to spinning out of control?

The sixth link reports that Turkey may want to use a recent terrorist attack inside Turkey as a justification to launch a ground attack inside Syria and adds that Turkey helped transport 500 “Islamist rebels” into positions to fight the Kurdish forces fighting ISIL and other Islamist radicals inside Syria. So who did these “Islamist rebels” belong to? Were they ISIL fighters, al-Qaeda-aligned forces or someone else? Turkey can’t seem to figure out whose side it is on in the Mideast. The seventh link describes that even the Israeli air force launched a recent mission to attack targets inside Syria.

As long-time readers know, I have followed the development of an Israeli-Egyptian-Jordanian-Saudi alliance ever since its earliest beginnings years ago. This alliance is becoming ever-more open. The eighth link relates that Egypt’s President al-Sisi has openly given Israeli Prime Minister Netanyahu high praise. Can you imagine this happening just a few years ago? The ninth link adds that Israel’s Defense Minister met recently with Jordanian King Abdullah. It says little about what they discussed, but the fact that the Israeli Defense Minister was the one talking with the Jordanian king argues strongly the real purpose of the meeting was to arrange closer future cooperation between Israeli and Jordanian military forces if a wide and chaotic war breaks out in the future.  The tenth link reports that Turkey and Israel, who have been at odds ever since Erdogan took power in Turkey, may be making an attempt to reconcile their differences. The eleventh link reveals a possible motive for this meeting. Israel, Turkey and Greece all have a lot to gain economically if they work together in developing and transporting natural gas from a major Israeli gas find off its coast. Mutual economic advantage has long been a factor in bringing nations together.

The last link reminds us that we cannot forget Russia, which is now more militarily involved in the Mideast than the USA. Russia and Turkey are just one spark from a fight between their military forces. Russia has sent a major surface warship with modern cruise missiles to Syrian waters. If Turkey does start a fight with Russian forces inside Syria, that Russian warship will likely be launching a lot of missiles at Turkish targets…inside Turkey. If that happens, the situation could result in a major regional war breaking out. This brings up an important matter involving possible American and NATO roles in such a war. As many readers realize, NATO has a clause that if one NATO nation is attacked, all NATO nations must go to war to protect it. If Turkey gets in a war with Russia, Turkey will almost surely demand NATO activate that clause. However, there is a problem with that reasoning. NATO nations have no desire for a war with Russia or anyone else right now. One could interpret that NATO clause another way that would permit the USA and NATO to stay out of Russian-Turkish war. While that NATO clause does mandate that NATO nations all fight against an aggressor who attacks one of its members, I don’t think it requires NATO nations to intervene in any war in which a NATO member starts the war. If Turkey invades Syria and ends up tangling with Russian forces and Turkish and Russian military forces start killing each other, I think NATO nations will find just cause to stay out of the war. This would leave Turkey isolated and could result in a very bad outcome for Turkey and Erdogan. Another reason why NATO nations have no desire to enter any war with Russia in the Mideast on the side of Turkey is that this would almost surely spark a large NATO vs. Russia war on the Ukrainian front as well.

There are so many possibilities on how a wider war could start in the Mideast. A more apt question may be: Given the many military forces now engaged in the region, can a wider war be avoided? Oh yes, I heard yesterday on cable TV news the US air force bombed ISIL targets in Libya. This widens the theater of conflict without injecting any focused strategy into American actions. While none of us object to the USA bombing ISIL targets, American military actions under President Obama tend to be fitful and ad hoc actions that lack any overall strategy and purpose. This leaves all the nations in the region confused and increasingly in doubt of American intentions–forcing them into new alliances that they wouldn’t have considered a few years ago.

From a biblical point of view, these ongoing wars and possible wars to come certainly fulfill Jesus Christ’s prophecy in Matthew 24:6 that “wars and rumors of wars” will characterize the latter day period of time just before his Second Coming. Also, no matter how chaotic the Mideast situation appears, events will be maneuvered by the Creator God who inspired the Bible to fulfill the alliance alignments that he prophesied in Ezekiel 38-39 for World War III at the very end of our age. I do not believe that we are about to witness World War III because three major events have to occur prophetically before World War III occurs, at least according to my current perspective. These events are: (A) Babylon the Great’s global financial system is still in place and has not yet fallen (Rev. 17-18), (B) the beast power has not yet emerged on the world scene and it has a 42-month reign prophesied for it at the end of our age (Rev. 13:1-5) and the Two Witnesses who will be sent by God to intervene (and yes, meddle) in global international matters while wielding delegated Divine powers for 1260 days have not yet arrived on the scene (Rev. 11:1-6). However, the Bible’s prophecies certainly allow for major regional wars to erupt between various alliances of nations before the ultimate World War III occurs. At the rate things are progressing in the Middle East, a major war seems inevitable unless some peace process stops the on-going carnage inside Syria.