Is the EU Entering a Political Civil War? 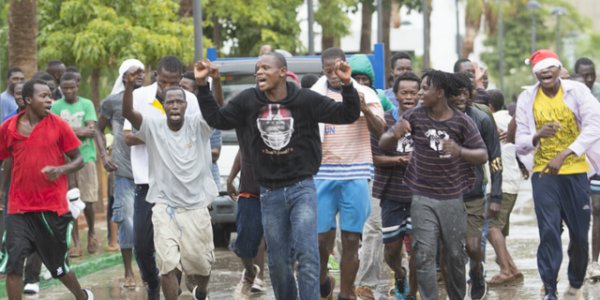 The EU bureaucrats are suing three EU nations for not taking in “their share” of third world immigrants that a group of bureaucrats in Brussels decided that these nations should accept. The nations being sued by the EU leaders are Poland, Hungary and the Czech Republic, which are showing no indication of submitting to the EU’s diktats (first link and second link). The first link also reports that the EU is “escalating its attacks” on Hungary because Hungary opposes the actions of George Soros within that nation’s borders. The EU is “attacking” Hungary for not wanting George Soros’ activities in their nation? Does that ever reveal the EU to be a tool of the globalist insider elites! The second link adds that Slovakia and Romania also opposed allowing the EU bureaucracy to dictate how many immigrants each EU nation must accept.

The third link has an extremely interesting chart about where European nations now stand regarding whether to support building an EU army or not. Five EU nations do not support creating such an army. These five nations are the United Kingdom, Iceland, Malta, Denmark and Portugal. These five nations are joined (outside any future EU army) by the following NATO members in not being a part of any EU army: the USA, Canada, Turkey, Norway, Montenegro, Iceland and Albania. Of the nations that technically voted to create an EU army, a number of them (Poland, Hungary, the Czech Republic, Latvia, Lithuania and Estonia) are either already openly feuding with the EU bureaucrats or are now deepening military ties to the USA and the NATO command structure. I urge you to look at this revealing chart. It illustrates that the EU is being pulled apart over the issue of whether to create an EU army and whether EU nations should substitute an EU military force for their current NATO alliance. It is my view that European nations will not be allowed to stay in NATO if they vote to form an EU army outside of NATO’s command structure. Their military forces cannot answer to two sets of leaders. Also, I suspect that US President Trump will declare that the USA’s security guarantees will not apply to any NATO nation which chooses to submit command of their military forces to EU generals instead of NATO generals. When “push comes to shove,” a number of European nations will choose to stay under the USA’s security guarantee rather than abandon that protection.

President Trump’s recognition of Jerusalem as Israel’s capital city was uniformly condemned by many of the EU nations. However, one nation–the Czech Republic–broke ranks and announced that it may follow the US example of moving its embassy to Jerusalem (fourth link).

The EU has been in a battle with Poland over the plans of Poland’s governing Law and Justice Party to overhaul and get control of that nation’s judicial branch (fifth link and sixth link). The EU wants the world to think that Poland is making a power grab to rein in the independence of the judicial branch in Poland. However, a guest op-ed piece in the October 18, 2017 Wall Street Journal (WSJ) by Ryszard Legutko provides a much clearer picture of what Poland’s government is trying to do. That piece (which is available online to subscribers of the WSJ) reveals that the reason for this action is to regain control of the Polish courts to act in the interests of the Polish people! This piece reveals that a number of Poland’s Supreme Court members and other lower judges have “troubling connections” to Poland’s Communist past, and that the judicial system there has no checks and balances on it because the sitting judges can select their own replacements! Poland’s ruling party is attempting to rid itself of judges who are former Communists and create a system of real checks and balances on the Polish courts. The op-ed piece makes it evident that the EU favors the current system as it preserves a statist judicial branch that is not answerable to Polish citizens or anyone elected by Polish citizens. The op-ed piece also asserts that Poland is not surrendering to the political correctness that the EU desires to impose on the continent of Europe. I urge you to check out this piece in your library if it has archives of the print version of the Wall Street Journal’s back issues.

The EU’s policies are also chafing Bulgaria which is passing a law to ban the advocacy of Sharia law and other practices common to Islamic extremists (seventh link).  I’m sure this action by Bulgaria is not popular with the EU’s unelected bosses.

The final link is also from the WSJ. I’ve included this link for those who are subscribers, but those who are not subscribers can read this article at their library if it has copies of this newspaper. It offers a keen analysis of why the EU itself is stoking the fires of populism throughout Europe by “the failure of mainstream political parties to respond to public opinion.” It has two other quotes which are gems of insight. The first is that Eastern Europe is a hotbed of resistance to the EU diktats because Eastern Europe “missed out on two generations of post-1945 liberal re-education..(emphasis added).” Did you notice that phrase? “Post-1945 liberal re-education.” In other words, the EU is having such difficulties with Eastern European nations because those nations were not subjected to the “re-education” that western Europe was subjected to after World War II! It is far easier for the EU to impose its anti-Christian, anti-western, politically correct agendas on western European nations which have had statist/globalist, insider, politically-correct dogmas forced upon them for many decades! The article concludes by stating that if the EU’s leaders continue their resistance to populist demands, it will witness the emergence of a “…cultural protectionism with the power to split an already fragile EU (emphasis added).”

My posts have outlined the growing fractures within the EU for a considerable period of time, but it is gratifying to see that a prestigious publication like the WSJ admits openly that the EU is now a “fragile” entity that could be “split” in the future.Personally, I think the EU’s elites are so addicted to their self-granted power that they will not yield it to the EU nations. This means that a split within the EU is almost inevitable. It may well be that a Europe after an EU split will see much of Eastern Europe allying itself to the USA and the United Kingdom. The EU suffers from two huge structural weaknesses that almost guarantee its collapse. The first weakness is that its leaders have no credibility with the people of Europe because the EU’s leaders are not elected! All its top leaders are appointed by the insider elites that have governed and controlled Europe since World War II. These insider elites are mainly based in Germany, France and the Brussels bureaucracy. The European Parliament is elected, but its powers are very limited and it was structured to be mostly a debating society. Without any accountability to the continent’s voters, it is no wonder that the EU leaders are so amazingly out-of-touch with Europe’s people. Its second great weakness is that it has no army or military forces. This means the EU has little “soft power” because it has no “hard power.” The EU cannot enforce its Leftist, politically-correct edicts. It is attempting to mend that weakness by creating an EU army, but many European nations are going to balk when they learn that participating in an EU army means they will almost surely lose any American security guarantees.

The Bible prophesies in Revelation 17-18 that the insider elites of the political and corporate classes will experience a terrible fall at the end of our age in which they will lose their power. Revelation 18:3 reveals that the ruling classes of the globalist insiders are very corrupt and have been using their positions to enrich themselves at the expense of the people. They are going to be overthrown. The Creator God who made the Universe has pre-ordained their exposure and collapse in the two above chapters. Already, the sins and arrogance of the globalist insiders in the USA and Europe is being exposed, and the people of an increasing list of nations are opting for nationalism and populism instead of globalist entities like the EU. Let’s keep watching this unfolding and accelerating trend which is eventually going to overthrow the entire global power structures of the world’s current insider elites (called “Babylon the Great” in Revelation 17-18).

For additional background information on the biblical/prophetic background which is actually controlling the tide of current human events and for insights into biblical prophecies that have already come to pass and others which will be fulfilled in future years, please read the following articles: Are We Living in the Biblical Latter Days?, Is Babylon the Great about to Fall…Ushering in a New Beast System?, and The Babylonian Origin of the Modern Banking System. Those who believe there is no Creator God are living in a Fool’s Paradise which is going to be shattered in future years when God makes himself very real to the entire world as his prophecies are increasingly fulfilled.