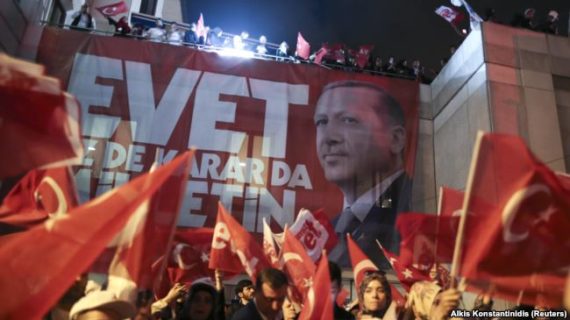 For some time, I have been watching events in Turkey with bewilderment. Turkey has long been a vital part of NATO and it is strategically located astride the Bosporus and Dardanelles–which control access for Russia’s Black Sea fleet to enter the Mediterranean Sea. However, Turkey has been burning its bridges with all the nations of the EU which Turkey once sought to join. Turkey has also given many neighboring Islamic nations reason to doubt Turkey’s motives and reliability. Currently, Turkey is being led by President Erdogan, and he appears to be leading Turkey into…isolation. Erdogan has become steadily more authoritarian and is governing Turkey in a manner which is also increasing Islamist.

The first link details the recent Turkish election which gives Erdogan massive new powers and which gives him the right to stay in office until 2029. The vote barely passed and the opposition party is challenging the result due to irregularities in the voting (second link). In the campaign regarding this vote Erdogan wanted to be able to campaign in European nations to motivate Turks in Europe to vote for his desired outcome. The EU nations said “no” to Erdogan, and this led to a “brutal war of words” between Erdogan and various European nations–especially Germany, the Netherlands, Denmark and Switzerland (first link). Erdogan has taken positions which have essentially eliminated any possibility of Turkey being accepted into the EU. He is also alienating his NATO allies. It does not appear that Erdogan cares about this negative consequence for Turkey. He seems to have some internal vision of somehow restoring the Ottoman Empire under his rule, but it is very hard to see how his actions and words will lead to anything but Turkey’s isolation in the region.

European tourists once frequented Turkey’s attractions in great numbers, but Erdogan’s harsh relations with Europe and his Islamist path have dramatically deterred Europe’s tourists from coming to Turkey (third link). The third link cites Europeans as being “angry with Turkey,” and Turkey’s “lurch away from Democracy to an authoritarian state under President Recep Erdogan.” Given Erdogan’s Islamist actions and his harsh crackdowns on his own people, it is clear why Europeans are afraid of going to Turkey and are currently avoiding it. This European “boycott” is having a deleterious effect on Turkey’s economy.

Erdogan surely must have alienated the world during the siege of Kobani by ISIS forces. While anti-ISIS Kurds were fighting for their lives in Kobani (on the Syrian-Turkish border), Turkish tanks were right at that border and could easily have driven off the ISIS terrorists. Instead, Turkey refused to fight ISIS when it had the chance to do so–an action which spoke volumes about Turkey and Erdogan’s motivations and positions. ISIS was long financing itself via oil sales and Turkey did not attack those convoys of oil tankers headed into Turkey. Under President Obama, The USA seemed unwilling to make a dent in the convoys of ISIS oil tankers heading into Turkey to sell ISIS oil on world markets. After Turkey shot down a Russian warplane and Russia moved substantial military assets into Syria, Russia began bombing the ISIS oil convoys on a large scale. The fourth link reports that Russian pilots once saw an amazing 12,000 ISIS oil tankers grouped at the Syrian-Turkish border. The entire world realized Turkey was a silent partner in the ISIS oil business. Russian bombing missions stopped this oil business and the US-coalition did do some missions. ISIS then began perpetrating some terrorist attacks on Turkey as well as on other nations. Sometimes, it becomes hard to understand what is going on in the Mideast due to its conflicting and changing alliances and circumstances.

Then Erdogan made a major mistake. The fifth link and sixth link report that Erdogan had his forces and followers essentially prevent the US and other NATO nations from using the Incirlik air base in Turkey to attack ISIS. This action also speaks volumes about Erdogan’s motives. However, I think this action has backfired on Erdogan. The seventh link reports that the USA and other NATO allies are ready to abandon operations at the Incirlik base in Turkey and that the USA is hastily building five new air bases in Eastern Syria to replace Incirlik. One of the reported objectives of the new air bases is to create a “military shield against the Turkish army” for Kurdish forces allied with the US and tribal Sunni Arab forces fighting ISIS. This action is part of an effort by the US and Kurdish/Sunni Arab forces to create a blocking force in Eastern Syria to prevent a continuous land corridor for Iran’s Shiite forces from Iran through Iraq into Syria and Lebanon (as discussed in a recent post).

Media reports now state that Turkey’s President Erdogan is coming to the White House to confer with US President Donald Trump in May. This should be a very interesting meeting. Erdogan wants the US to extradite a person living in the USA which Erdogan blames for the very weakly-orchestrated “coup” against Erdogan which led to Erdogan’s reign of terror on all his opponents and others loyal to the secularist Ataturk tradition of Turkey. Trump will no doubt demand Turkey’s cooperation in the fight against ISIS and the Shiite coalition and probably try to arrange a peace of some kind between the Turks and Kurds (both of which are Sunni Muslims). Coming at this key time is the release of a movie in the USA which paints the Turks in a very bad light as it focuses on the Turkish killing of a million or more Armenians prior to World War I (last link).

There is a biblical connection to these events. It is my view that the Turks are one of the principal descendants of Esau (Edom), the grandson of Abraham via Isaac. One of the primary tribes of Esau (the Edomites–Genesis 36:1) was the Temanites (Genesis 36:11. 15 and 34). The consonants of Teman are T-M-N. Consonants are important in tracing ancient peoples as many ancient languages did not write vowels in their words. The consonants of the “Ottoman” Empire are TT-M-N, a match to this prominent Edomite tribe. One of the promises given to Abraham was that his descendants would “inherit the gates of their enemies” (Genesis 22:17). This promise was primarily given to the birthright Israelite tribes of Ephraim and Manasseh (the UK and the USA), but it was not limited to them. The Edomites (Esau) received an important “gate” when they gained possession of the Bosporus and Dardanelles which controls maritime traffic between the Black and Mediterranean Seas. Abraham was promised to be the father of many nations (Genesis 17:5). These nations included all modern nations descended from the twelve tribes of Israel, the Edomite tribes, the Ishmaelite tribes, the descendants of Abraham via his last wife, Keturah and the sons of his concubines who were sent to an “eastern” country (Genesis 25:6).

These nations, as my books, audio messages, articles and blog posts make clear, include the Israelite tribes (found in the European nations, the USA and Canada, Australia and New Zealand, Israel, etc.), the Ishmaelite tribes (the modern Arab nations), the Edomites (Turkey and other nations), the sons of Keturah (eastern European nations), and nations descended from Abraham’s concubines (which include, in my judgment, the Brahmins of India whose name, Brahmin, preserves the name of Abraham when an initial “A” is added to their name–“Abrahmin”). Many of these nations (and their allies) are in NATO and the various alliances of the Western world. None of these nations are named in the list of the nations that will be in Gog-Magog alliance of Ezekiel 38:1-6 which includes Russia, China., Iran, etc. which was specifically prophesied to come into existence in “the latter days” or “latter years” of our current age (Ezekiel 38:8 and 16). The fact that this alliance has come into existence today exactly as prophesied in Ezekiel 38 confirms that we are living in the “latter days” of our age. Significantly, none of the descendants of Abraham are mentioned as being in the Gog-Magog alliance. Currently, none are in it. However, Turkey’s future is uncertain under Erdogan’s leadership. He seems to be leading Turkey into an isolated position without allies who can trust Turkey. If Sunni Turkey isn’t going to help with blocking the Shiite land corridor across the Mideast from Iran to the Mediterranean Sea, then the Sunni Arab nations cannot trust Turkey either. Also, given the negative experience of the Arab nations under Turkish rule in the time of the Ottoman Empire, the Sunni Arab nations have no desire to be part of any new Ottoman Empire which Erdogan may dream of establishing [For an insight into that time, one can view the movie, Lawrence of Arabia].

Here’s hoping President Trump can convince Turkey into being a cooperative partner in the fight against first ISIS and then the Shiite coalition led by Iran, Syria, Hezbollah, the Houthis, etc. which is allied to Russia. We’ll have to wait and see what happens. For in-depth information on some of the above subjects, I recommend my articles, Are We Living in the Biblical Latter Days?,  What Ezekiel 38-39 Reveals about a Future World War III , The USA in Biblical Prophecy, and my books available at this website’s home page.