IS CHINA’S MONOPOLY OVER “RARE EARTHS” ABOUT TO BE BROKEN? 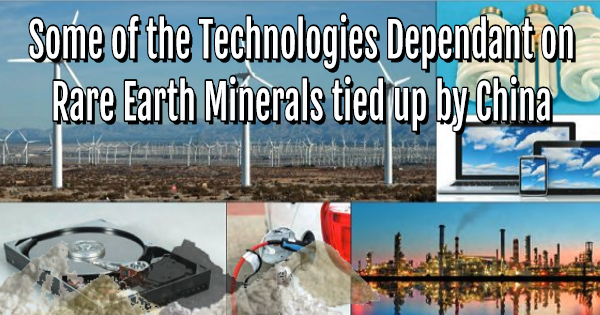 Have you heard of “rare earths” and know why they are important to the global economy? If so, you are ahead of the masses who are unaware of how dependent our modern technologies and lifestyles are on finding and obtaining supplies of several “rare earth” elements and metals. These rare earth substances are well-named as they are incredibly rare and not easy to find. However, so many modern technologies and products would be impossible to build without them. This is true for both civilian and military applications. Many high-tech weapons cannot be built without them. A nation that had a monopoly on rare earths would have a huge advantage in global geopolitics. China is well-aware of this, and it has been attempting to corner-the-market on rare earths so all other nations are dependent on China’s terms and favor to obtain any supplies of these rare earths. In 2009 and 2011, I wrote two posts about how important rare earths were to a functioning society and about China’s effort to gain a stranglehold on the global supply of these substances. These two posts are included as the first link and second link and they are just as relevant to read today as when they were written. They also discuss the military uses for rare earths and how vital is it to have access to these substances.

The third link also describes why rare earths are so important and also delineates the types of high-tech products and gadgets that require rare earths to be built at all. Few people realize the high-tech products they utilize every day would no longer be built if the rare earth supplies dried up. China has long been quietly making efforts to have a monopoly on these strategic materials. The third link also reports that at one point, China controlled 97% of the supply of rare earths to the world. That is clearly a monopoly. Some new developments indicate that supplies of rare earths have been found elsewhere, and the circumstances of their discovery reveal to all other nations where and how they can look for them inside their own nations!

In Indonesia, a discovery of rare earths was made in an unexpected place. It was discovered that rare earths in industrial quantities were present at the site of an old tin mine (fourth link). I’m not sure if the discovery of the rare earths in Indonesia was in the actual workings or the tailings from the old tin mine, but its discovery has given Indonesia a very valuable substance to mine and export. Some production is beginning, but the extraction of the rare earths will soon be done on a much larger scale (fifth link). I’m sure many nations are lining up to buy Indonesian rare earths as that nation is a far more reliable supplier of rare earths since it is not under the control of the Communist Chinese Party, as are all rare earth mines in China.

Another possible source has recently been identified. The tin mines in Cornwall of the United Kingdom have been mined for perhaps over 3,000 years. The ancient Phoenicians mined tin in ancient Briton circa 1000 BC, and their control of the tin mines helped make the Phoenician/Israelite Empire quite rich. Carthage inherited the Phoenicians’ overseas assets when the ancient northern kingdom of Israel, Tyre, and Sidon fell to invaders. Tin was a critically important metal in the ancient world as it was needed to alloy with copper to make bronze. The history and extent of the Israelite/Phoenician Empire is documented in my books, The Origins and Empire of Ancient Israel and Israel’s Lost Empires. The tin mines of Cornwall were still being worked in the Roman times, and there are historical reports that Joseph of Arimathea (mentioned in the Bible) was not only the great-uncle of Jesus Christ, but also a Roman citizen/official who oversaw the Roman tin mines in….you guessed it….the old Phoenician tin mines in Cornwall. He had to be a very important person within the Roman world to be granted immediate access to Pontius Pilate, the Roman ruler of Judea, even during a time of great crisis (Mark 15:42-45). Joseph of Arimathea and his possible role in the Cornish tin mines are detailed in my book, Parthia: The Forgotten Ancient Superpower and its Role in Biblical History. There is striking harmony between the Bible’s narrative accounts and the annals of ancient secular historians. My books document those harmonies in great detail.

It is interesting to me that the tin mines of Cornwall, so important in several stages of ancient history, could again play a major role in global mining importance. Even though the last tin mine closed decades ago in Cornwall, recent discoveries have shown that a large deposit of lithium exists in those ancient mines. Lithium is essential to making modern, high-grade, lithium-ion batteries, and the United Kingdom may be becoming a major producer of this vital, high-tech metal (sixth link and seventh link). Since the Indonesian rare-earth deposits were found in or by a tin mine, it may be possible that rare earth deposits will be found elsewhere on the earth wherever old or current tin mines are located. It is not clear whether the British have yet performed testing in the Cornish tin mines to look for the valuable rare earths as well as lithium, but I’m sure they will do so. If the British find a rare earth deposit in Cornwall, it will put them in the drivers’ seat in being the supplier of critically-important rare earths to the nations of the entire Western world. All nations of the world should now be looking at old tin mines within their border to determine if they contain overlooked deposits of rare earths as well! Indeed, since rare earths were found in a tin mine, it is logical that the nations should re-examine and test all old mining properties within their borders to determine if they contain any rare earths, which would have been regarded as useless in the past but are now ultra-valuable. It may be that rare earths will be found at many properties that mined other metals besides tin. If the nations of the world start finding rare earths at their old mining sites, China’s efforts to gain a monopoly on these rare metals and elements will soon be over.