IS CHINA RESPONSIBLE FOR THE SEIZED FENTANYL THAT COULD HAVE KILLED 14 MILLION PEOPLE? 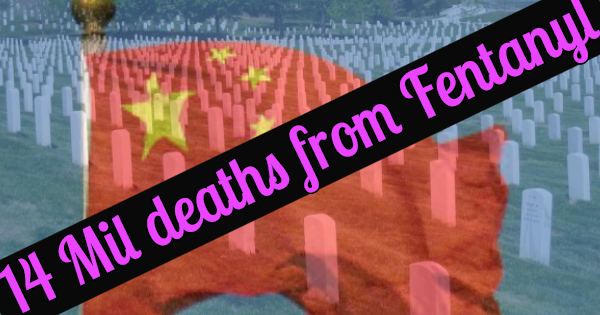 In a story that deserved more press coverage than it received, federal and local law enforcement agencies seized enough illegal fentanyl to kill 14 million people. The seizure, which took place in Virginia, shut down a multi-state drug ring that was distributing enough fentanyl to kill many millions of Americans in several metropolitan areas. There are plenty of media sources that the tsunami of illegal fentanyl being smuggled into the USA (and other nations) is coming from China. This post will consider the possibility that this illegal fentanyl is not only being distributed to make money for illegal drug rings, but that it also has a far more sinister purpose–that it is being pre-positioned for use in a future war by China against the USA.

First, let’s consider the facts of the seizure. American law enforcement agencies cooperated to shut down a huge fentanyl distribution network in the USA, and these law enforcement agencies deserve our compliments and thanks for this achievement. The first link and second link offer the basic facts about this massive drug bust, and they point out this illegal fentanyl enters the USA either via the US postal system or by being smuggled across the US-Mexican border. It also is evident that the Chinese makers of fentanyl are cooperating with Mexican drug cartels to infiltrate these killer drugs into the USA. The amount of fentanyl seized was 66 pounds, and it is a stark testimony to how toxic fentanyl can be that such an amount is enough to kill 14 million people! I learned about this story from a one-paragraph story in the Minneapolis Star-Tribune which reported that these 66 pounds of illegal fentanyl came “from China.”

The third link documents that China is, indeed, the source of vast amounts of illegal fentanyl being smuggled into the USA and is being stored in who knows how many other locations besides the identified site in Virginia. While it is an excellent achievement that this large stockpile of Chinese fentanyl was located and seized, one does wonder how many other stockpiles of Chinese fentanyl exist throughout the USA which have not yet been located or seized by the authorities. The fourth link also asserts that illegal Chinese fentanyl is being smuggled into Europe as well as into North America. It is abundantly evident that China is using alliances with drug cartels to smuggle illegal fentanyl into the USA and the European NATO nations. It is worth noting, as an aside, that the efforts by the Democrats/Leftists to keep the US-Mexican border porous and undefended are enabling China’s effort to pour illegal/lethal drugs into the USA. This fact alone is a justification for “building a wall” on our southern border that would greatly inhibit the efforts of China and the drug cartels to insert such dangerous drugs into the USA.

I think it is safe to say that the shipment of vast quantities of illegal Chinese fentanyl into the USA is an official policy of the Chinese Communist Party which rules China with an iron fist. Hardly anything major can happen in China unless it is a state-approved action. Why would China want to smuggle huge quantities of a highly-lethal drug into the USA? The answer is clear when one considers the content of a book entitled Unrestricted Warfare, by two Chinese Colonels– Qiao Liang and Wang Xiangsui. This book was translated years ago into English from the original Chinese sources. It is very likely that it was never intended to be “leaked” into the English language where the USA and the western nations would became aware of its contents. The book is based on a Chinese belief that war against the USA is inevitable, and that China must fight such a war with many types of asymmetric means. Among the types of asymmetric warfare advocated in this book are financial warfare, smuggling warfare, cultural warfare, drug warfare, media and fabrication warfare, etc. The term “media and fabrication warfare” is a prescient term for what we now refer to as “fake news” meant to divide and confuse Americans. The smuggling of fentanyl combines the “smuggling warfare” and “drug warfare” aspects of the proposed asymmetric war against the USA by China. The two Chinese colonels who authored this book describing how to defeat America insidiously call for all types of warfare to be waged against America to weaken it from within so it falls into Chinese hands like ripe fruit once any real shooting war begins. The original Chinese paper was published in 1999 by the Chinese People’s Liberation Army in Beijing so there is no question that it reflects official Chinese policy in how to subjugate the USA. The copy I bought was published in English in 2002 and its cover depicts the attack against the Twin Towers in New York city in 2001. The book apparently has other covers as well in a variety of printings. The fifth link offers readers several ways to obtain copies of this revelatory book about China’s intention to destroy the USA.

How might China use pre-positioned stockpiles of fentanyl against the USA, NATO nations and their global allies? The answer is an easy one. In the event of a war against the USA, China’s goal would be to annihilate the USA and its people. China, and its Russian and other allies, could wipe out the American ability to wage war in a single initial stroke. They could initiate hostilities not via outright military attack, but rather a coordinated effort to kill as many millions of Americans as possible by putting lethal doses of fentanyl (and other toxins) into municipal water supplies all over the USA, Europe, India, Japan, etc. China could also identify which municipal water systems supply drinking water to all US military bases and facilities throughout the world. If China could simultaneously introduce lethal fentanyl into all western drinking water systems all over the world, China could succeed in killing off millions of Americans and westerners via their drinking water. American, NATO and allied military forces could potentially be killed via poisoned drinking water supplies before they could even enter combat. Perhaps lethal doses of fentanyl could be spread into the air over key locations via aerial drones spewing out aerosolized sprays containing lethal fentanyl dosages. Think of the terrorist attacks that could be perpetrated via the poisoning of the water supply of a large American city with fentanyl dumped into the water distribution nodes by clandestine Chinese (or their allied agents). Could fentanyl be used in large enough doses to cause mass casualties if it was sprayed in an aerosolized form into the air by low-flying drones over an NFL or college football game? If these types of terrorist attacks do not occur when the means and opportunity exists, it argues that the large caches of fentanyl being located within the USA, Europe, etc. are not being used for that purpose because they are intended for deployment in one huge, simultaneous, global strike against all the western allies at a future time. If this happens and it is successful, China could hope to win a crushing victory within hours without firing a shot.

However, being forewarned to the danger means American, European and allied cities and military bases can take actions to prevent such an attack. This obviously should already be a national priority within all nations that could potentially be targeted by China. Maybe the seizure of the huge cache of illegal Chinese fentanyl stored in Virginia is evidence that the authorities do realize the extent of the danger and are fighting back. The media articles that President Trump has warned China to stop shipping fentanyl into the US may also be evidence of this awareness. It is not impossible that a kind of “Mutually Assured Destruction” now exists between the USA and China. Let us indulge in some speculation. Is it possible that President Trump has already secretly warned President Xi of China that if Chinese fentanyl is ever used in a mass strike to kill off the American civilian and military population, the order has already been given to the US military to launch all American nuclear weapons at China and its Russian and Iranian allies? The realization that any mass poisoning of the American population by China would quickly result in nuclear death raining down everywhere on China would be a powerful motivation for China to not only stop inserting lethal stockpiles of fentanyl into America but to also withdraw their current fentanyl cashes as quickly as possible. This possibility should not be discounted. Jesus Christ warned in Matthew 24:21-22 that unless divine intervention occurred at the end of our age, “all flesh” would perish. That warning matches the prophetic warning that divine intervention will end a prophesied World War III that will be in progress when that divine intervention occurs.

The effort by China (and their allies in Russia, Iran, etc.) to launch a surprise attack against the USA, NATO and their global allies was prophesied in the Bible over 2,500 years ago in the 38th and 39th chapters of Ezekiel (as well as in other biblical prophecies about the latter days of our age). It reveals that their attack will be intended to seize all the territory, physical wealth, gold and silver, livestock, etc. of the attacked nations (Ezekiel 38:11-13). That the attack is intended to destroy/conquer the people of the attacked nations but not its livestock or physical wealth argues the initial attack will not be a nuclear weapons attack as that kind of attack would destroy all the physical wealth the Chinese, Russian, Iranians, etc. wish to seize for themselves. The Bible’s prophecies also indicate that the surprise attack by Russia, China, Iran and its allies will ultimately fail due to divine intervention to end both World War III and our current age. However, the global casualties of this prophesied World War III will be immense. Ezekiel 39:1-3 reveal that only one-sixth of the attackers (or attacking nations) will survive the war.

For in-depth information about the above topics, please read my free articles, Are We Living in the Biblical Latter Days?, The USA in Biblical Prophecy, What Ezekiel 38-39 Reveal about a Future World War III, Four Reasons the Jews are Judah and Should Christians Prepare for Future Hard Times? If you read these articles, you will understand that there is a predetermined “script” that a Creator God has already decreed will be acted out by the nations in the years ahead of us. If you also obtain copies of my books on the history and modern locations of the ten tribes of Israel, you will understand biblical prophecies much better as you will be able to match modern nations with their ancient names used in biblical prophecies.