IS CHINA PLANNING TO START A REGIONAL WAR BY INVADING TAIWAN? 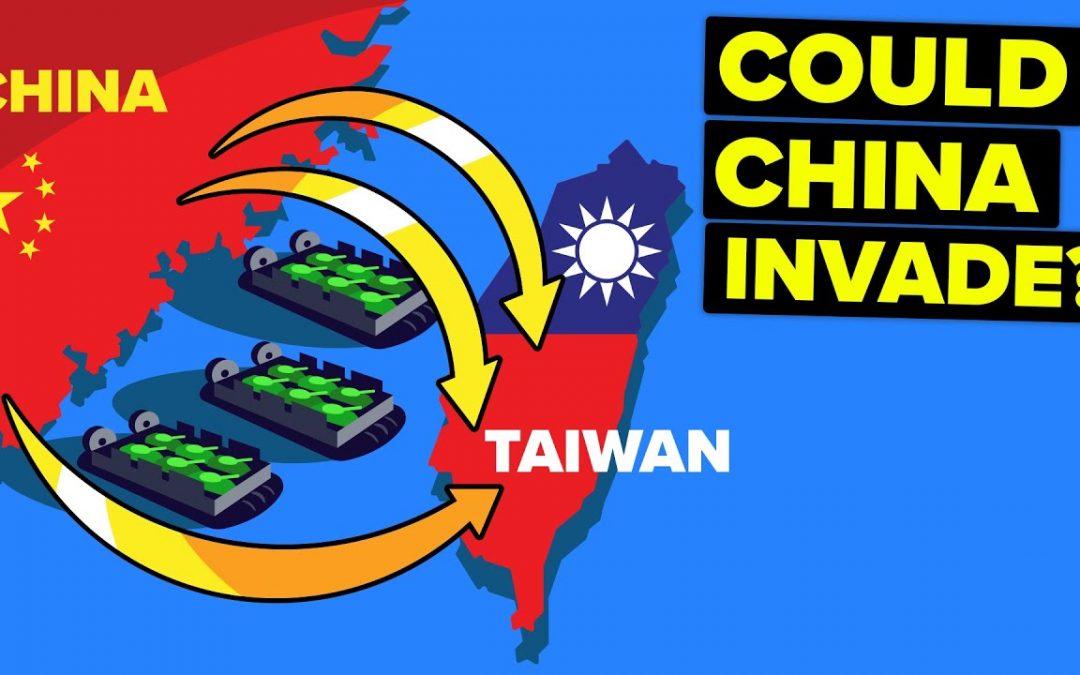 China has been threatening Taiwan with an invasion for years, but the intensity of the Chinese military provocations vs. Taiwan has recently grown much greater. China has been sending more warplanes into Taiwanese air defense interception zones over the last year, but sent almost 100 warplanes into Taiwanese air space in a recent three-day weekend period. This is about as close as you can get to starting a war without actually declaring one (first link and second link). Taiwan scrambled its warplanes and tracked the Chinese planes with its air defense missile systems, and the USA issued a strong statement in defense of Taiwan. [Note: As this post is being finalized, China has reportedly sent 50 warplanes into Taiwanese air space in a single day.]

China has also been issuing hostile statements toward Western nations as well as threatening Taiwan by its actions. As I’m sure many readers know, the United States, the United Kingdom and Australia have formed a new strategic alliance called AUKUS (an acronym for Australia, the UK and the USA). This action strengthens the alliance of nations which is coming together to resist Chinese militarism in the Indo-Pacific region (third link). The new AUKUS alliance has caused consternation in both China and North Korea as the new alliance will effectively integrate these three English-speaking nations into a collective and coordinated force to oppose China. France is also angry about the alliance’s first action, but for a different reason than what motivated China and North Korea (fourth link). France had negotiated a lucrative deal to build modern, conventionally-powered submarines for Australia, but this deal was called off when Australia was allowed to buy US nuclear-powered submarines–a quantum leap ahead of conventionally-powered technologies– as the AUKUS alliance was formed. Such technology is rarely shared so this new deal represents a tremendous amount of trust within the AUKUS alliance. France is losing many billions of dollars worth of business due to Australia’s decision to switch sub suppliers so French anger is understandable. France even recalled its ambassador from the USA, which is a very strong diplomatic action. It would seem that the best course of action is to have Australia buy billions of dollars worth of other weapons systems (frigates perhaps?) from France to help the French economy as well as the Australian military. France still administers control over a number of Pacific Islands, and these French dependencies could become important to the Western alliance as possible rear bases in any future Pacific war.

Taiwan no longer looks like it will have to face China alone in any Chinese-Taiwanese war. A recent post reported on the remarkable bilateral Japanese-Taiwanese meetings in which their military and diplomatic officials held talks to discuss mutual actions to resist China. Given this open bilateral meeting, it does appear that Japan has made a strategic decision to intervene on Taiwan’s side if China invades Taiwan. Japan has sent China a warning in these direct talks with Taiwan.

Taiwan is also holding direct bilateral talks with Vietnam (fifth link). The link reports that anti-Chinese riots have been occurring in Vietnam, and some of those riots affected Taiwanese businesses as well as Communist Chinese businesses. Taiwan and Vietnam are negotiating on how to compensate the Taiwanese businesses harmed in the riots, but the most important aspect is that the bilateral talks are happening at all. Such bilateral talks show Vietnam is also treating Taiwan like the sovereign nation that it truly is. Vietnam did this knowing that it would antagonize China. Vietnam has serious problems with China’s imperialist claims in the South China Sea, and many forget that after the USA withdrew from its war with Vietnam in the early 1970s, Vietnam had to defend itself vs. an attack from Communist China and Vietnam fought China to a draw. The sixth link notes that Vietnam and Singapore did not criticize the new AUKUS alliance and the Philippines openly endorsed it. The link also notes that Malaysia and Indonesia had critical words to offer regarding the deal. The Indo-Pacific nations are steadily being forced to “choose sides” between China on one hand and the developing Quad alliance that is forming to resist China. The Quad alliance consists of the USA, India, Japan and Australia, and it is the collective threat from China that has pushed these four nations together. Since the USA and Australia are in both the AUKUS and Quad alliances, these two alliances are already overlapping realities. Vietnam is proving to be an emerging force in Southeast Asia. Not only has it been steadily moving to align itself with the interests of the Quad alliance to protect itself from China, it is also seeking to use its regional influence to pull Cambodia and Laos away from being further influenced by China (seventh link). Taiwan has also received another piece of good news. A recent poll in the USA shows that 69% of Americans favor recognizing Taiwan as an independent nation, and a majority of Americans support military action to defend Taiwan if it is invaded (eighth link).

Do not forget India as it is critical to deterring the Chinese from starting a regional war over Taiwan or the South China Sea. If India meets with Taiwan’s leaders in a bilateral forum, China will realize that Taiwan will likely have a number of strong nations fighting to protect Taiwan if China invades it. India already has supersonic cruise missiles that can reach many strategic Chinese targets, and India will soon have hypersonic cruise missiles as well (ninth link). If the Quad openly supports Taiwanese sovereignty, China would risk having Indian cruise missiles being fired at China’s Three Gorges Dam and many other strategic targets if a regional war does erupt.

China has at least two major reasons arguing against it invading Taiwan, despite its regular bellicose threats to do so. The first is economic. China’s entire economy is very dependent on its export-driven components, and any invasion of Taiwan is almost certain to result in very harsh global economic sanctions versus Chinese businesses, banks, etc. This could collapse China’s economy and any such collapse would threaten the Communist Party’s hold on domestic power. China could face a situation where the nations of the world would refuse to do business with any Chinese entity until China pulled its forces out of Taiwan and back to China. Also, if a regional war erupts, combatants will almost surely target China’s Three Gorges Dam until it is destroyed–creating a huge freshwater tsunami that would travel downriver doing incalculable damage to Southeastern China as the dam’s giant reservoir was unleashed. Indeed, when/if this happens during a regional war, the war will likely end quickly as China will need to use its army to rescue much of the citizenry in Southeast China. A vast tract of China would lose electricity as the Three Gorges Dam generates power for a significant portion of China. Indeed, given how dependent China is on the continued functioning of the Three Gorges Dam, I suspect Taiwanese war planners have considered ways that Taiwan could destroy that dam as soon as China began its invasion. Taiwan has had many decades to come up with a plan, and it has had intense motivation to find a way to do this.

There is another reason why the entire Western world cannot let Taiwan be invaded/subjugated by China. Taiwan makes the lion’s share of the world’s highest-tech computer chips, and these are already in short supply due to covid lock-downs, drought, supply-chain problems, etc. If China took over Taiwan’s super chip factories, China would control the globe’s super chip supplies, giving it economic hegemony over the world economy. The West cannot allow this, so military interventions to keep Taiwan independent are virtually certain. If Taiwan repulses a Chinese invasion, nations which fought to help Taiwan will be at the front of the line to receive super chip exports from Taiwan and those nations who refused to help Taiwan will be at the back of the line. China may have a secret motive to invade Taiwan to seize control of the global super chip market, but the rest of the world already knows about this danger, I’m sure.

This situation is slowly sliding toward war. China’s increasing air threats to Taiwan and Japan’s willingness to openly hold military and political talks with Taiwanese officials testify that a steady escalation is occurring. China appears to be full of hubris about invading Taiwan and that could lead to terrible consequences for the entire Indo-Pacific region.

Will there be a future regional war in the Indo-Pacific region? Biblical prophecy indicates that there will not only be a major war in the Indo-Pacific region, but that a future World War III is certain. Ezekiel 38-39 has a very detailed prophecy about the alliances that will fight in an age-ending World War III, and it offers very detailed information about how the war will start, unfold and end. The prophecy will be fulfilled in the latter days so we must be able to prove that our modern times are the biblical “latter days.”  Fortunately, that is not hard to do. My article, Are We Living in the Biblical Latter Days?, offers conclusive evidence that we are now living in that prophesied time. Another article/research paper entitled, What Ezekiel 38-39 Reveal about a Future World War III, offers very specific information about the nations that will fight in that war and which ones will ultimately win and lose. A creator God has already “scripted” the outcome. It also connects Ezekiel 38-39 with many other biblical prophecies about the latter days to show how they are in complete harmony with each other. Japan has a key role to play in the end times, and that is examined in my article, Japan’s Role In Biblical Prophecy. Obviously, most modern nations are not named in biblical prophecy by their modern names, but rather by past historical names, and my articles make the appropriate linkages. Since most of my readers are in the USA, I will also suggest the article, The United States of America in Biblical Prophecy, as the USA has a critical role to play in latter-day events. Don’t believe anyone who tells you that God forgot to mention the USA and major Western nations in biblical prophecy. Biblical prophecy has much to say about the USA’s future destiny. My aforementioned article on the USA offers considerable information about the USA’s identity in Bible prophecy, but my books on the overlooked history of the ten tribes of Israel combine exhaustive evidence from secular sources with biblical prophecies to document the biblical identification of the USA and most Western nations. These books are available at my website’s home page.

Keep your eye on Taiwan. China wants to subjugate it, and Taiwan and other nations are determined to not let that happen.