IS AUSTRALIA FLIPPING FROM “GLOBALIST” TO “NATIONALIST” STATUS? 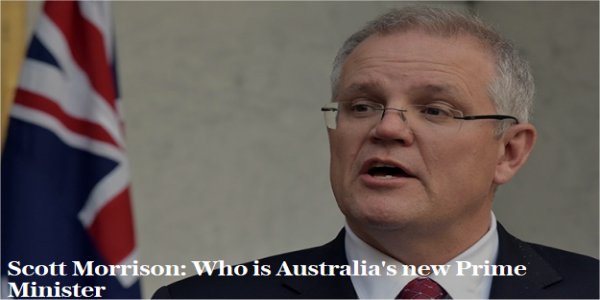 In a rather sudden development, the government of Prime Minister John Turnbull in Australia was overthrown in an internal party power struggle. Turnbull was ousted as Prime Minister and Liberal Party leader by Scott Morrison, who is much more conservative and nationalist than was Mr. Turnbull. Turnbull, a “former investment banker,” was a reliable member of the world’s leaders who could be classified “globalists,” those who favor nations being governed by internationalist entities like the UN and its many affiliated agencies, and such internationalist alphabet-soup bodies like the IMF, BIS, WTO, EU, etc. Mr.Morrison’s resume indicates that he will be more inclined to implement a more “nationalist” governmental agenda. The first link reports him to be a “staunch conservative” and a “devout Evangelical Christian” who “opposes same-sex marriage.” The links below credit Mr. Morrison, when he was a cabinet minister in Mr. Turnbull’s administration, with the Australian policy of not admitting illegal immigrants and refugees into Australia. As a government minister, Mr. Morrison took such stringent border-control measures as towing boatloads of immigrants back to Indonesia and building dentition camps for them on remote islands to keep them apart from the Australian nation. An “open borders” policy is a key indicator of a globalist policy while having strict border controls and vetting of immigrants is a clear nationalist policy. This kind of resume indicates Prime Minister Morrison may have much in common with President Trump of the USA.

There is a massive struggle going on across the world between the globalists who have been steadily pushing for global government and centralized control of global decisions in the hands of unelected bureaucrats selected by the globalists’ favored elites, and the nationalists, who favor asserting and preserving the distinct cultural, political and religious heritage of each individual nation and preventing globalist institutions from having authority over internal national matters. Paradoxically, the globalists’ promotion of “open borders” policies–such as the one imposed on Europe’s nations by the EU–have stimulated a powerful backlash among nationalist forces within many nations and caused many nations to switch from globalist governments to nationalist ones. In Europe, the EU and leading nations such as Germany, France, Italy, etc. sought to impose a policy of massive immigration of unvetted immigrants from the Mideast and Africa into European nations. Most of these immigrants have no interest in assimilating into the culture of their new host nations. Indeed, many Islamic immigrants have wanted to impose Islam and Sharia Law on portions of their host nations. This has caused massive voter opposition in many EU nations who have voted globalist governments out of power and placed nationalist governments in power to protect their respective national identities. Nationalists have taken firm control of governments in Poland, Austria, Hungary, The Czech Republic, Slovakia, etc.

However, it was the Brexit vote in the United Kingdom and the nationalists’ win in the Italian elections which terrified the globalists into a realization that they could lose power everywhere and that the EU itself was in danger of collapse. The UK is in limbo at the moment as it is not clear whether there will be a “hard Brexit” or a “soft Brexit” which would leave the EU’s globalists with much retained control over the UK. The UK’s Prime Minister May is a globalist who was part of the Remain camp and she recently tried to impose a very pro-EU, weak Brexit on her cabinet–prominent members of which revolted and resigned. When the Italians rejected globalist candidates and opted for strong nationalists in their recent election, the EU bureaucrats panicked. They attempted a maneuver through the largely ceremonial position of Italy’s President to impose a pro-EU technocrat as Italy’s new Prime Minister even though the nationalists had won the election. However, when it became evident that any new elections would not only re-elect the nationalists back into power, but it would also likely have become a referendum on whether Italy should leave the EU and the Eurozone, the EU backed down (as discussed in previous posts). However, all governments in Europe saw the EU’s attempted “putsch” in Italy as evidence that the EU leaders see themselves as a continental government which should rule the nations like a parent rules over his/her children. The next big showdown between the globalists and nationalists will be in September’s Swedish elections. Sweden has long been a globalist bastion. If the nationalists win in Sweden, it will be a sign that the globalists are heading for a collapse of their agendas.

I have often cited Revelation 17-18’s prophecy in my posts. That prophecy indicates that an entrenched globalist, insider power structure combining governmental and corporate leaders (Revelation 18:2-3) will be overthrown in some kind of political/financial/monetary crisis or event. The language in Revelation 18 indicates a crisis in the global money system is foretold to occur which will result in the entrenched globalist powers (called Babylon the Great) being overthrown by a cryptic alliance called “the seven heads and ten horns” (Revelation 17, see especially verse 16 which has language indicating a hard take-down is probable). Revelation 13:1-5 parallels Revelation 17 and adds that the seven heads and ten horns will install a new global power structure called the “beast” and that its rule is divinely limited to just 42 months. Revelation 19:11-20:6 prophesies that at the end of the 42 month period, this new beast power structure will be destroyed by Jesus Christ and his army of spirit beings who, quite literally, will conquer the earth and set up a millennial utopia.

It is possible that the seven heads and ten horns will all be leaders of nationalist nations acting together to do a “take down” of the insider elites that control the globalist institutions. While I make no predictions in this post regarding the identity of the seven heads and ten horns, the nationalist nations, at present, include the USA, Russia, China, Israel, India, Turkey, Poland, Italy, Hungary, Austria, Saudi Arabia, Egypt, etc. The globalists currently govern Germany, France, Canada, New Zealand, Sweden, Belgium, the Netherlands, etc. The globalists also have a virtual “lock” on the international media outlets so the surging power of the nationalist camp is either vilified or largely ignored in global media reports. The United Kingdom is in limbo, but a hard Brexit would place it in the nationalist camp. Australia looks like it has just switched from the globalist camp to the nationalist camp. If Sweden elects nationalists in their September election to replace long-entrenched globalists, it will be evident that the globalists are in a state of accelerating retreat in their titanic power struggle vs. nationalists. One reason, in my opinion, that the globalist American media is trying so hard to take down President Trump is that he possesses so much power that he can strengthen the nationalists all over the globe with his policies. When Revelation 17-18 is fulfilled, the seven heads and ten horns may prove to be a group of unlikely allies from the nationalist nations acting together to destroy the globalists’ bid for planetary control. We live in very interesting, perilous and climactic times. For additional information on above topics, please read my articles, Are We Living in the Biblical Latter Days?, Is Babylon the Great about to Fall…Ushering in a New Beast System?, and The Babylonian Origins of the Modern Banking System.