Is a Pre-Emptive Strike on North Korea Drawing Nearer? 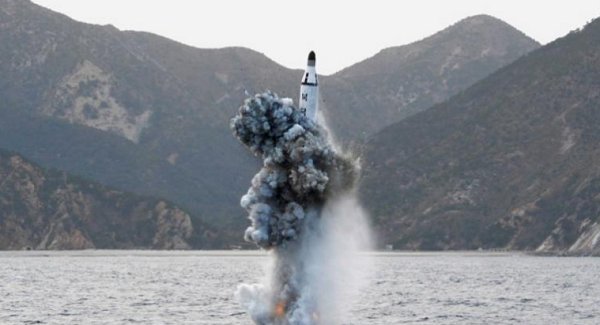 North Korea is now acting in such a bellicose and threatening manner that it may be inviting a pre-emptive strike on its nuclear facilities to stop it from launching a nuclear-tipped missile at Japan, South Korea, the USA or some other nation in the foreseeable future. People have laughed at North Korea’s paranoid harangues and endless threats for some time, but this matter is getting very serious as North Korea appears to be racing to possess the ability to launch nuclear-tipped missiles from land or possibly even from submarines. The first link discusses North Korean tests of sea-launched missiles fired from its submarines.The second link estimates that North Korea might have as many as 70 submarines, but the statistical breakdown infers that perhaps six might have the capability of firing submarine-launched missiles.

North Korea recently arranged the assassination of the half-brother of North Korean leader, Kim Jong Il, in a Malaysian airport. The third link calls this assassination “stunning in its brazenness,” and this event was covered widely by the global media. The third link also details North Korea’s barrage of four missiles being fired toward Japan, with three of them landing inside Japan’s Exclusive Economic Zone. It also soberly states that “Pyongyang’s goal is plain: to place a nuclear warhead on an intercontinental ballistic missile capable of reaching the United States,” and it offers intelligence estimates of North Korea’s ability to do this within 2-4 years. The fourth link notes that on March 6, Japan went to its “highest military alert level” after the North Korean missiles impacted in the Sea of Japan.

Obviously, South Korea and Japan have every reason to be very worried about North Korea’s missile firings as one can never know when North Korea will launch an actual missile attack on those nations. To help South Korea defend itself against a North Korean missile attack, the USA is in the process of deploying an advanced missile-defense system to South Korea (fifth link). US President Donald Trump also consulted with the leaders of South Korea and Japan on March 7th to arrange “urgent high-level discussions in response to Pyongyang’s provocations (sixth link).”

North Korea’s race to being able to strike the USA or its Asian allies with nuclear weapons cannot be ignored or downplayed. While estimates are that North Korea will be able to do this in 2-4 years, I’m sure all readers realize intelligence estimates can be wrong. President Trump and other allied Asian nations cannot wait until the last moment to take action to forestall such a threat. Another “wild card” to consider are the close ties between North Korea and Iran–another rogue nation working to develop nuclear weapons (last link). If these two nations are pooling their efforts to build their respective nuclear weapons programs, both nations might have nuclear weapons sooner than would be possible if each worked alone.

At some point, Japan, South Korea and the USA will have little choice but to implement a pre-emptive strike against North Korea’s nuclear weapons program, its missile launch sites, etc. How soon that point will be reached is unknown, but North Korea shows no sign of rational intentions or behavior, so a danger zone of time is now approaching where one cannot wait too long to act to forestall a nuclear attack by North Korea on the USA, Japan or South Korea. If this happens, it will likely trigger a conventional war between South Korea and North Korea and North Korea has a very large number of artillery pieces that can launch a major attack on South Korea. This begs the question: If a pre-emptive strike is needed on North Korea, will it be necessary to take out as many of North Korea’s artillery forces, warplanes, navy ships, etc. in the same attack? This situation is very dangerous.

One more thought. I have no idea re: the seaworthiness or range of North Korea’s submarines. If some of them can cross the Pacific Ocean and position themselves off the US West Coast, they won’t need ICBMs to attack the USA if they have the ability to launch missiles from some of their submarines. Indeed, all possible threats from North Korea need to be considered. What if North Korea launches missiles at American cities with warheads filled with chemical or bacteriological materials? Such an attack could occur long before North Korea has the ability to place nuclear warheads on its missiles. If North Korea’s submarines can cross the Pacific Ocean, could they launch such an attack now? Think of the chaos that would be created if North Korea launches from its submarines missiles at the USA with radiological “dirty bombs” in their warheads? Launching such missiles at Japan or South Korea would be much easier as they are in relatively close range from North Korea.

North Korea’s warlike intent needs to be taken seriously…now. The “brazenness” of the assassination of the North Korean leader’s half-brother in a foreign nation argues that North Korea may also have the “brazenness” to attack the USA, Japan or South Korea with missiles before such an attack is expected.

This dangerous situation is in harmony with the prophecy in Ezekiel 38 about the global alliances that will be extant on the earth during the “latter days” of our age. North Korea’s close ties to Iran and China clearly indicate it is in the Gog-Magog alliance, but Russia, China and Iran may not want a war with the USA and its allies in the near future. It is uncertain what kind of control China has over its rogue client state. For more information about a biblical perspective on this Pacific Rim crisis and the rival alliances in the region, please read my articles, Are We Living in the Biblical Latter Days? and What Ezekiel 38-39 Reveals about a Future World War III.