Is a “Mideast NATO” in the Offing? 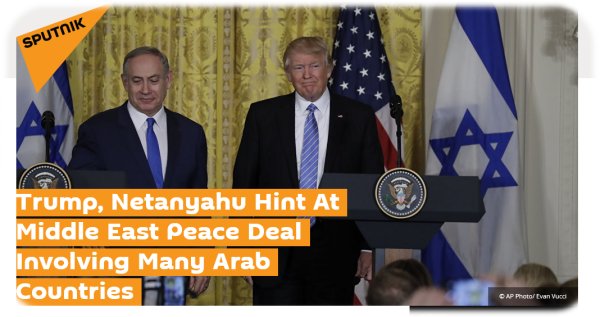 In their joint press conference held recently in Washington, DC, Israeli Prime Minister Netanyahu and US President Trump voiced an indication that major negotiations are underway behind the scenes to assemble an overall alliance between the Sunni Muslim governments in the Mideast and the Israelis as both entities are increasingly threatened by a militaristic and warlike Iran. The first link reports that both heads-of-state hinted “a broad regional peace deal with Arab countries that might surprise many” is nearing a point where it can be announced openly. It noted that Trump seemed “visibly surprised” that Netanyahu openly hinted at this possibility. I watched the press conference and I agree. I thought Trump did seem surprised Netanyahu was so open about it. It seemed to me that Netanyahu was almost giddy at the reality of having an openly pro-Jewish, pro-Israel president like Donald Trump in the White House. Did he “let the cat out of the bag?” We’ll see.

The second link adds that Egypt is very positive about renewing its traditional alliance with the USA under President Trump after Obama gave Egypt the “cold shoulder” for the last six years. If some kind of a new “Mideast NATO” is formed, it is logical that it would be headquartered in Cairo, Egypt–given the large population and military power of Egypt in the Mideast. As long-time readers of this blog know, I’ve been pointing out signs of increasing Israeli-Sunni Muslim cooperation for years, and I’ve indicated that an alliance of these entities would be very much in all their national interests and also in complete harmony with the biblical prophecies of Ezekiel 38 re: the global alliances that will be present on earth during the latter days. If a Mideast NATO of some kind is announced, I expect Israel, Egypt, Saudi Arabia, Jordan, the United Arab Emirates and other Sunni nations will be part of it. Even Turkey may be included, but its recent trend toward greater Islamism may work against its inclusion. Since the USA seems to be mid-wifing this new possible alliance, it is entirely possible that the USA may be a member of this new security alliance as well. The USA is threatened by Iran as is Israel and the Sunni Mideastern nations so all are being pulled together by Iran’s open militarism.

It is also mentioned in the second link that Senator Ted Cruz, one of Donald Trump’s rivals for the GOP nomination for president, has introduced a bill in the US Senate that the USA formally declare the Muslim Brotherhood to be a terrorist organization. Such an action would deepen ties with Egypt, which has already done so. Indeed, the current Egyptian government of President al-Sisi rescued Egypt from a state of anarchy that was being initiated by the Muslim Brotherhood’s attempted take-over of Egypt after the fall of the Mubarak government.

Iran has noticed the warming ties between Israel and the Sunni Islamic nations with displeasure (third link). Iran has been so bellicose that it seems to not realize that it is responsible for that development. This link’s report that the new US Ambassador to Israel’s favorable viewpoint concerning Israeli-Sunni cooperation is a further indication that these ties are not only getting closer, but that the USA may possibly be a part of this new Mideast NATO as well.

How might a new Mideast NATO look? As stated above, I expect it to be headquartered in Egypt. It is likely to be a secular security alliance, not a religious one; therefore, it is not likely to be headquartered in Saudi Arabia and it is too politically sensitive to have it headquartered in Israel. If Turkey is involved, it may include a peaceful settlement of the Turkish-Kurdish problems in a way where an independent Kurdistan will be recognized in a way which all parties can accept. There may be a sense of urgency in getting this new Mideast NATO operative soon. While everyone seems to be somewhat working together to defeat ISIS in northern Iraq, the situation in Iraq may quickly degenerate into Sunni vs. Shiite fighting afterwards. The fourth link reports that Iran may control perhaps 100,000 armed Shiite militiamen inside Iraq already, and that is in addition to Iran’s dominance of the central Iraqi government. The Kurds in northern Iraq are Sunni and mostly pro-Western, and Sunni nations in the Mideast are doubtlessly best served if they can salvage at least a portion of Iraq for the Sunni side by recognizing Kurdistan as a sovereign nation. The fifth link asserts that “Iran has effectively taken over most of…Iraq,” and that new sectarian Sunni vs. Shiite confrontations will occur inside Iraq after ISIS is vanquished. It also notes that Shiite forces are equipped with US-made M-1 Abrams tanks. That this could have happened is a testimony to the military incompetence of the Obama administration. It seems to me that if the Sunnis want to keep Sunni Kurdistan out of the Shiite orbit, they will need to include an independent Kurdistan in any Mideast NATO.

How does an Israeli-Palestinian agreement figure into the creation of a “Mideast NATO?” There is no question a satisfactory agreement on this issue would enable the creation of an Israeli-Sunni alliance to occur quicker. The Trump-Netanyahu press conference clearly stated that a two-state solution is not necessarily going to be how the Israeli-Palestinian relationship is resolved. As Iran gets stronger, the threat to the Arab Sunni nations grows, and that means that a new format for a Palestinian-Israeli settlement may be needed to implement a formal Mideast NATO agreement. Ask yourself this question: In a war or conflict between the Sunni Mideast nations vs. Iran and all its Shiite proxies (the Yemenite Houthis, Hezbollah, Syria, Iraq, etc.), what help would the Palestinians be? The answer is “none at all.” Ask yourself the same question, but substitute how much help the Israelis could offer to the Sunnis in such a war or conflict? The answer is: “a vast amount of help!” This dynamic reveals that it is steadily becoming more important for the Sunnis to ally themselves with Israel as a regional ally than it is to help the Palestinians impose an unrealistic treaty on the Israelis. There is another reason why the Sunni Arab nations now have reason to recognize the Israelis as a partner in the Mideast and the world. Israel’s development of a massive new natural gas field in the Eastern Mediterranean sea means that Israel will be an energy-exporter in future years (last link). That means the Israelis will have a common interest with coordinating energy prices and policies with OPEC–a new economic reason for the Arab nations to ally themselves with Israel. The final link also mentions that Israel’s new status as a natural gas exporter draws it closer to Turkey as well as Jordan, Greece and Cyprus.

I see one possible “wild card” announcement if a new Mideast NATO is announced in the future. Iran is rapidly developing its nuclear program and I think only the naive believe that the US-Iranian nuclear agreement will slow Iran’s nuclear program down at all. The non-nuclear Mideast Arab nations need a nuclear power in any new Mideast NATO to deter Iran. It has long been assumed by the world that the Israelis have nuclear weapons although the Israelis have neither confirmed nor denied it. Think of how remarkable it would be if, when a new “Mideast NATO” is announced to the world, the Israelis would formally announce that they are a nuclear power and that their nuclear weaponry stands in defense of its new Sunni Muslim alliance partners. That news would echo around the world (!), and could be existentially important to the Mideast Sunni nations as well as a powerful deterrence to Iran from taking aggressive actions vs. its neighbors.

If a new Mideast NATO is announced which includes Muslim Sunni nations, Jewish Israel and Christian America, it would mean what used to be called the “People of the Book” are all finally starting to make common cause in an alliance as we proceed deeper into the biblical latter days of our age. This is totally harmonious with the prophecy in Ezekiel 38:1-6 that the latter day Gog-Magog alliance will not include the Sunni Arab nations (“Ishmaelites” in biblical terms), the Israelis (“Judah” in biblical terms), Egypt, and Turkey (Edom” in biblical terms).

For an in-depth examination of the biblical topics alluded to above, please read my articles: Are We Living in the Biblical Latter Days? and What Ezekiel 38-39 Reveals about a Future World WAR III.