Is a Magnetic Pole Shift in Our Foreseeable Future? 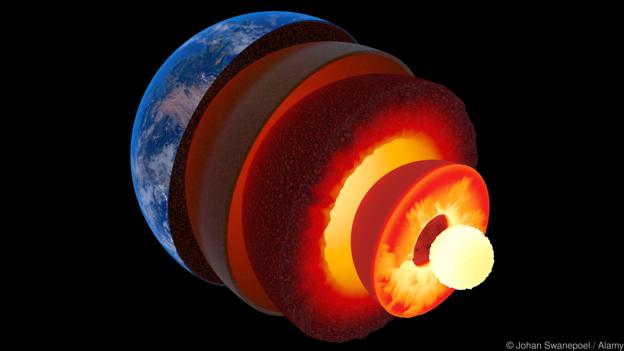 A topic caught my eye during a web search recently, and I thought I’d share with readers some information about a huge “earth change” event which not only may occur in the years ahead of us, but may also be specifically prophesied to occur in a biblical scripture. This event was not found in some obscure, “fringe” website. Warnings about this possibility come from the websites of the BBC and NASA, establishment websites to be sure.

The event that is expected to occur in our planet’s future is a “pole shift,” which would be a reversal of the earth’s north and south magnetic poles. Scientists have determined that such shifts have occurred regularly in the earth’s ancient history. The first link and second link offer detailed evidence about these periodic magnetic pole-shifts. According to the websites, such pole shifts have been occurring in geologic time at more-recent intervals of perhaps 200,000 years, but no such pole shift has occurred for approximately 780,000 years. That argues that a disruptive pole-shift is seriously overdue. The steady weakening of the earth’s magnetic field and the steady drift of the earth’s magnetic north pole may indicate that these are preliminary signs which could indicate a a pole-shift is nearing.

The links contain a warning that power grids and communications systems may be endangered when/if this pole shift occurs. I also would expect that all navigational systems and many satellites would be disrupted or rendered useless by such a pole shift. Would global GPS calculations all go “haywire?” If people are driving around in “self-driving cars” when this happens, would the cars become disoriented by a total reversal of all compass coordinates and start driving cars into opposing lanes of traffic, over cliffs, etc? We have no experience with such a drastic earth change on our planet, and we likely have no grasp of just how great the havoc of such an occurrence would be on all our high-tech, industrial-age systems.

When I read the links, I immediately thought of the prophecy in Isaiah 24. I suggest you read the entire chapter to see if its prophecy sounds like a prophecy about a pole-shift event. Isaiah 24:1 prophesies a time will come when “The Lord makes the earth empty, and makes it waste, and turns it upside down, and scatters abroad the inhabitants thereof (emphasis added).” Turning some aspect of the earth itself “upside down” could easily describe a pole-shift which reverses the northern and southern magnetic poles. If that happens, the polarity of the earth’s magnetic fields will, literally, be turned “upside down.” This verse also states a consequence of this action will be that the earth’s population will be “scattered abroad.” That indicates that this will not be an extinction level event, but it prophesies major dislocation and disruptions to the earth’s population. Such an event might have dramatic effects on the weather, animal migrations, and many other factors that we cannot foresee.

Isaiah 24:4-6 are more apocalyptic. They predict that earth will “mourn” and “languish,” and that the people on earth will be “burned” and the population dramatically reduced. The Hebrew word translated “burned” could also be translated “be angry” or “be dried” according to a concordance I consulted. If the original intent was to prophecy that mankind will be “dried,” would mean a massive drought would be caused by such a shift, leading to starvation, food wars and depopulation due to those reasons. Verse 5 states this calamity will come upon the earth because of mankind being “defiled” in God’s eyes by mankind’s sinfulness and rebellion against the laws of God. Isaiah 24:18-20 sounds even more apocalyptic. It prophesies the earth “is utterly broken down” and “moved exceedingly” to the point it “reels to and fro like a drunkard.” This sounds like more than just a pole shift is occurring at this prophesied time. This language indicates massive tectonic activity and an earth that has been struck by an event that causes it to “wobble” on its axis. Such an event could easily be caused by the event prophesied in Revelation 8:6-13 that describes a “burning mountain” falling from the heavens and hitting the earth in the ocean somewhere. That language is a very good description of a large meteor or comet hitting the earth. John saw this event happening during a vision about the latter days, and such an impact could easily cause the earth to wobble on its axis. Verse 12 foretells that this event will also impact the viewing of the sun and moon from the earth’s surface, and this finds parallel language in Isaiah 24:23.

When is all this going to occur? Long-time readers of my posts know that I do not set dates, but prophetically, I believe that these events will be fulfilled at the very end of our age when our current age concludes and the Millennium/Messianic Age is about to begin. Such global apocalypses are foretold to occur in a period of prophetic time biblical writers have called “the day of the Lord.” The phrase “In that day” in Old Testament prophecies generally refers to that period of climactic time, in my view. Isaiah 24:21 uses that expression and the fact that the Messiah (Jesus Christ to us Christians) is ruling the earth in Isaiah 24:23 at the end of the prophecy of Isaiah 24 supports this viewpoint.

Isaiah 24’s prophecy may indicate events which will be simultaneous in nature or cumulative and concurrent in their effects. The language of this prophecy does indicate that a pole-shift may, indeed, signal the rest of the events in Isaiah 24 are about to be fulfilled as well. It does predict some kind of “upside-down” event in the earth itself, and a magnetic pole-shift would be an “upside -down” event that could fulfill this prophecy.

Isn’t it interesting that as mankind’s knowledge levels have increased (something prophesied in Daniel 12:4 to occur at the “time of the end”), scientists have been able to determine that such “upside-down” pole-shifts do occur at periodic intervals in earth’s geologic time, and that such an event may be drawing near. Scientists duped by evolutionary fables have no idea that such an occurrence was prophesied to occur in a book of the Bible about 2,700 years ago. Mankind’s knowledge is still “catching up to the Bible,” but they never give the Bible any credit. Someday they will. When God intervenes in power, they will be forced to recognize that there is a spirit world, and that our world (and all of us on it) were created and designed by the Supreme King of that spirit world–the one we call the Creator God. The scientific community isn’t willing to recognize the reality of that Creator God yet, but they will someday have no choice but to do so. It is only a matter of time till he gets their attention.