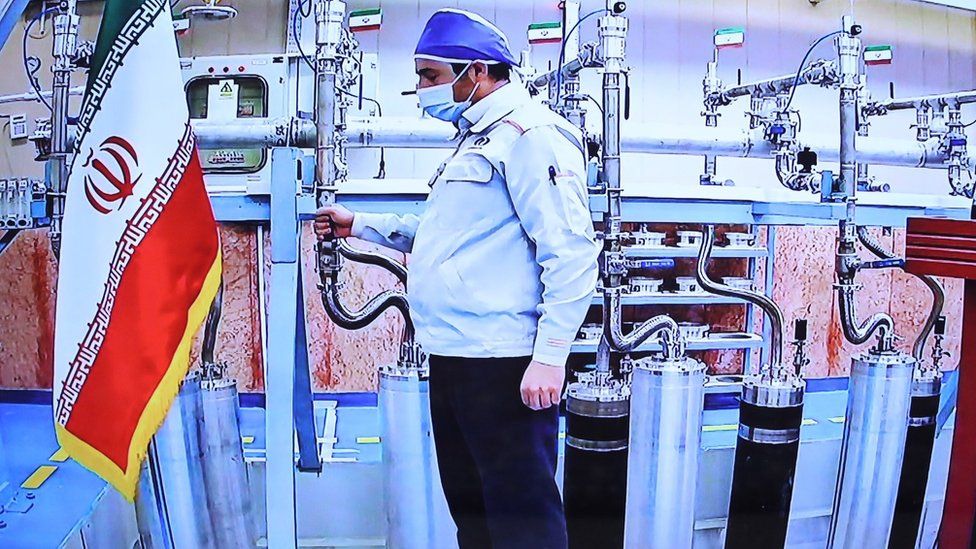 Once again, the Mideast is nearing the point of a major military confrontation. As I think readers realize, Iran has been violating the agreement it had to limit its enrichment of uranium in its centrifuges. Iran has insisted it is producing enriched uranium for peaceful purposes, but that is very hard to believe. Because Iran is oil-rich, it doesn’t need to develop any nuclear capability to meet its energy needs. Because Iran has proclaimed it wants to “wipe Israel off the map,” we can only assume it is enriching uranium to develop nuclear weapons to carry out its existential threat against Israel’s existence.

After the initial reports from Iran minimized the damage done to its Natanz nuclear facility, Iran now acknowledges the damage was much greater than first reported. There was a major explosion which “completely destroyed the independent internal power system” for this nuclear plant, and which has delayed its nuclear processing activities for approximately nine months (first link). This link also reports that the attack against this nuclear facility took place just as “advanced centrifuges to enrich uranium had been activated.” I’d suggest that this timing was meant to sent this message to Iran: “You will be not be allowed to develop nuclear weapons and you will be continually attacked as long as you pursue that goal.” The link also has a useful listing of Israeli-Iranian conflicts in recent times. The second link reports that there is a general consensus that Israel’s Mossad was behind the attack, and it adds that the attack has ended all power at the Natanz nuclear plant and that it also effectively “shut down all nuclear enrichments efforts in the country [ of Iran].” The third link adds that the Iranian ship that was attacked in the Red Sea not long ago has not moved since the attack occurred. The attack on this ship (and its wider impacts) was discussed in a recent post at my website. The third link also states that Israel is waging an “undeclared war against Iranian assets of all kinds in Syria (emphasis added).” I would suggest that Israel is doing so because the reason Iran has moved so many military assets into Syria is to position them to attack Israel.

The fourth link is an article (published prior to the attack) which described Iran’s intent to rapidly accelerate the enrichment of uranium stockpiles, and the fifth link reports that Iran is also testing “nuclear-capable ballistic missiles.” These missiles are reportedly capable of hitting targets 2,000 kilometers away from their launch sites in Iran. Such a range would put all of Israel within range of Iranian missiles. It is not hard to “connect the dots” here about Iran’s intentions. It means to hit Israel with nuclear weapons and it was accelerating its ability to build nuclear weapons and was testing the missiles to deliver the warheads to Israel at the time the Natanz facility was heavily damaged and shut down. Clearly, Israel has chosen to take whatever action is necessary to ensure their nation survives Iran’s openly-stated murderous intent.

We are at a very dangerous point in Mideast geopolitics. Iran is threatening revenge for this most recent attack on its nuclear facilities, and I take this threat seriously. Iran may even choose to alter its strategy to hasten an attack on the Israelis. Iran may abandon its strategy of building nuclear weapons to attack Israel. Iran, facing at least a nine-month delay in resuming its nuclear program, may decide to hit Israel with an all-out conventional weapons attack. As soon as they are ready, Iran may launch its new ballistic missiles (with conventional warheads) at Israeli military bases, seaports, cities, electricity and water desalinization plants, Israel’s nuclear facility at Dimona, etc. Simultaneously, it may order Hezbollah and Hamas to launch all their Iranian-supplied missiles and rockets at Israeli targets and order its Syrian proxy and the Iranian forces in Syria to invade Israeli territory. If this happens, how many missiles and rockets can Israel’s multi-layered air defense systems knock down before they are overwhelmed? Hezbollah alone is estimated to have over 100,000 rockets and missiles. If Iran does launch such a coordinated strike at all Israeli targets all at once, Israel will surely hit very hard at Iranian targets and may have to strike Hezbollah targets all across Southern Lebanon with tactical nuclear weapons to stop such a mass attack. Israel has made it clear that it will use all means necessary to ensure their national survival, and since President Biden’s administration has tilted in a pro-Iranian stance, Israel will surely not ask US permission to take any actions Israel deems necessary to survive. Iran may also hit Saudi Arabia and the Sunni Persian Gulf states as well in any such mass conventional attack. If Israel and the Sunni Islamic states are going to take some kind of joint action to launch a preemptive strike vs. Iran to stop such an attack, they need to realize that they are running out of time to take such action.

Also, a new “Wild Card” has just been introduced into the mix of Mideast politics. China and Iran have agreed to a major deal which will see $400 billion injected into Iran over 25 years. China will also be allowed to build a new military base inside Iran and sent at least 5,000 Chinese troops into Iran (sixth link). The link also reports Pakistan views this as a positive development. An agreement that allows China to deploy “at least” 5,000 troops to Iran could mean it will move 5,001 troops into Iran or it may mean 50,000…or more. Will these Chinese troops be manning air defense systems imported from China to counter any possible Israeli-Sunni attack vs. Iran? Is China making a major move into the Mideast to project its power into the region and make Iran a client state? This is a very ominous development which has clear biblical ramifications.

Whatever Iran and China are planning, God has guaranteed that the Israeli nation will not be “wiped off the map.”  Zephaniah 2:1-11, Zechariah 12:1-8 and Zechariah 14 reveal that Divine guarantee. However, Zechariah 14:2 and Revelation 16:16 reveal that God will allow hostile army forces to invade as far into Israeli territory as “half the city of Jerusalem” and the region of Har Megiddo (“Armageddon”) before the invaders are destroyed. Revelation 16:12 shows where those invaders will be coming from. They will launch their westward attack toward Israeli territory from the region of the Euphrates River–which is now controlled by an Iraqi central government which is increasingly a puppet of Iran. Revelation 9:14-16 echoes that same prophecy and adds that the army will eventually include 200,000,000 soldiers. It is my current view that that total includes all the global forces that will be mustered by the entire Gog-Magog alliance (which includes China and Iran), but it may mean that massive a horde will mass just at the Euphrates River region before they attack westward toward Israel and the Sunni Arab nations. Either way, to assemble that many soldiers will require a massive deployment of soldiers from China into that region. As a sign that this process is beginning, China is now deploying openly soldiers into Iran. China may possibly build an entire system of military bases inside Iran (and Shiite Iraq) to billet so many soldiers as is prophesied in the Bible.

Those who understand biblical prophecy can see that God is shaping world events to prepare for his entire progression of end-time prophecies to be fulfilled. Those “who have eyes to see” cannot help but notice God’s hand in modern geopolitics. For those readers of this blog who have not yet read my article, What Ezekiel 38-39 Reveal about a Future World War III, I urge you do so without delay. That article details what the Bible reveals about a coming World War III which will be fought at some point in the years ahead of us. Since God reveals in the biblical prophecies so many details about that future, age-ending war, you would be wise to read what the Creator God intends to bring to pass as this age grinds to its foreordained end before God establishes his millennial kingdom on earth.