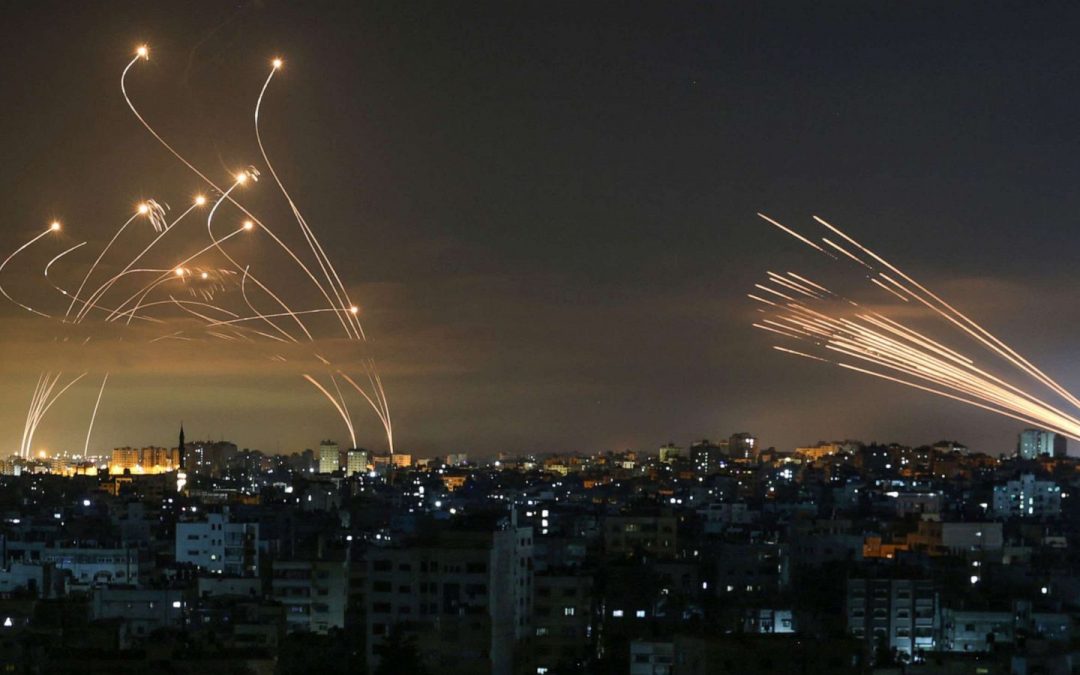 As all readers know, a military conflict has broken out between Hamas and Israel which threatens to erupt into an all-out war. As of this writing, I’m seeing on cable-TV news segments that Hamas has now fired over 3,000 rockets and missiles at Israeli cities and targets, and Israeli airstrikes and ground artillery are continuing to smash any buildings in Gaza associated with the military leadership and command structure of Hamas. Perhaps a cease-fire will be implemented soon, but none seems in the offing as this post is being written. There are numerous media options to read about and see the destruction unfolding in parts of Israel and in Gaza, but this post is primarily intended to comment on Iran’s hidden hand in this new conflict. What does Iran hope to gain from this loss of life and destruction of property?

Iran has publicly declared its intent to “wipe Israel off the face of the map,” and I see this operation as one more step in Iran’s overall goal. Indeed, Iran has a second goal: the subjugation of the Sunni Arab nations and making them submit to Iranian domination. The Israeli-Gaza conflict seeks to advance both goals.

As the first link points out, the fighting is not only between Israeli and Hamas forces in Gaza, street fighting has also broken out within Israel’s borders between Jews and Palestinians living inside Israel. This internal fighting within Israel is a new development in the history of Hamas-Israeli conflicts, and this internal fighting definitely serves Iran’s goals to weaken Israel from within. The first link reviews the onset of this fighting, but mentions something not covered much in most media coverage of this conflict. It adds that some rocket attacks have originated in Lebanon and that these rockets landed in the sea along the Israeli coast. This indicates that Hezbollah, an Iranian ally which controls southern Lebanon, must have been authorized by Iran to fire some of its reported 100,000 rockets and missiles at Israel as well. It says these rocket attacks from Hezbollah-controlled Lebanon “threatened to open a new front along Israel’s northern border.” Since these rockets that came from Hezbollah territory landed in the sea, they must have been aimed at Israeli seaports and/or major infrastructure targets like power plants and desalinization facilities. If Hezbollah launches a large number of rockets at Israeli cities and major infrastructure targets, a major war is all but certain as Israel is a small nation with no hinterland to absorb such damage. Israel would have to launch an all-out war with whatever means necessary to shut down Hezbollah rocket attacks from the north.

Iran’s hand in this conflict is obvious. The second link cites an Islamic Jihad spokesman in Gaza as saying their “weapons…money and food are provided by Iran,” and that they have an “endless supply” of Iranian rockets to use against Israel. The third link describes similarities between the tactics used by Hamas vs. Israel and by the Houthis vs. Saudi Arabia. Hamas and the Houthis are both proxies of Iran, and Israel and Saudi Arabia are two of Iran’s targets. The fourth link reveals that a huge shipment of arms (almost certainly from Iran) was seized by a US warship in the Arabian Sea. The link opines the Houthis in Yemen were the most likely intended recipient for that arms shipment, and I would agree. However, since Hamas boasts it has an “endless” supply of weapons from Iran, it is likely that some arms shipments from Iran to Gaza could take a more circuitous (but more stealthy) route around Africa and through the Mediterranean Sea to Gaza. These links have many embedded and related links that are well-worth your attention.

Additionally, the fifth link, sixth link and seventh link document more of the attacks and casualties incurred in this conflict. They include a lengthy list of Israeli cities targeted by these extensive attacks, the fact that a synagogue was hit by a rocket, and that six Israeli policemen were injured while subduing a terrorist inside Jerusalem.

Have you noticed what is missing in the accounts of this most recent Hamas-Israeli conflict? Whereas previous such wars were accompanied by a chorus of condemnations of Israel by Islamic Sunni governments, such condemnations are now noticeable by their absence. The eighth link and ninth link discuss this fact and some of the reasons behind it. I’ll also offer my own comments. Since the last Hamas-Israeli conflict, the Palestinian leadership has openly sided with Shiite Iran, the arch enemy of the Sunni Arab nations. Under the truth of the maxim, “The enemy of my enemy is my friend,” The Palestinians have made themselves an enemy of the Sunni Arab governments by siding with the Persian Iranians so they should not expect much support from Sunni Arab nations. We Americans are not taught much about world history in our public schools, but the Old World has very long memories about past wars and empires. The Arabs were once subjugated and dominated by the Persians in the past, and modern Arabs have no desire to ever be under the Persian heel again.

The Abraham Accords under President Trump came into being to create lasting friendships between the Israeli and Sunni Arab nations, and to advance mutual alliances against Iran’s militarism and expansionism. Iran knows this, and the Hamas-Israeli conflict has surely been started, among other reasons, to advance Iran’s goal of trying to stop an Israeli-Sunni Arab alliance from coming into existence. Such an alliance would make it very hard for Iran to accomplish its twin goals: wiping Israel off the map and subjugating the Sunni Arab nations. I’m sure Iran is willing to fight to the last Palestinian to stop such an alliance from forming. The Palestinians are, indeed, suffering badly, but Iran clearly regards them as “expendables” in its efforts to destroy Israel and subjugate the Sunni nations. Iran is also using the Palestinians to gain military intelligence. Iran has surely supplied Hamas with so many rockets because it wants to test the Israeli Iron Dome system to see how many rockets it takes to overwhelm it. Even if they can’t overwhelm it with Hamas’ rockets, the Iranians are forcing Israel to expend a lot of its Iron Dome projectiles to knock down Hamas rockets. This weakens Israel so it can be more easily overwhelmed by a truly massive rocket/missile attack from Hezbollah in Southern Lebanon. Undoubtedly, the Israelis realize this too, and they have to be counting their Iron Dome system’s “ammo” to see how much more they can expend in a prolonged engagement with Hamas.

This conflict could easily erupt into a wider war in the Mideast. If Hezbollah is ordered by Iran to fire many thousands of rockets and missiles at Israel in mass volleys, Israel will “take the gloves off” and use whatever weapons it needs to use to survive. Iran should also realize that any such war will also be fought inside Iran’s borders. Israel has missiles that can reach Iranian cities and targets as well as warplanes that can do so as well. Israel also has late-model submarines which are regarded as being capable of firing missiles with either conventional or nuclear warheads. I also suspect that the Mossad has prearranged many very unpleasant surprises for Iran if a truly big war becomes a reality.

From a biblical perspective, we can know that Israel is not going to be “wiped off the map” by Iran or anyone else. Zephaniah 2, Zechariah 12:1-9 and 14:1-16 all assure us that God will fight against the enemies of Judah in the last days and that he will defend Jerusalem when it is invaded. Zechariah 14:2 reveals it is the time when Jerusalem is actually being invaded that God intervenes in human affairs and sets up his Messianic Kingdom. Zechariah 14:12 prophesies that those who attack Jerusalem in the latter days will be killed by having their flesh, eyes and tongues melt off their bodies before they can fall over. This kind of “plague” was depicted very well in the Raiders of the Lost Ark movie. If any reader needs to see evidence that we are truly living in the biblical latter days, you will find it in my article, Are We Living in the Biblical Latter Days?

Finally, Genesis 49:8-9 prophesy that the tribe of Judah (the Jews/Israelis) will be like a conquering young lion in the latter days. If Iran provokes a wider war with the Israelis they are likely to regret it. They may learn it is never wise to provoke a lion to anger when its teeth and claws can reach you very quickly.