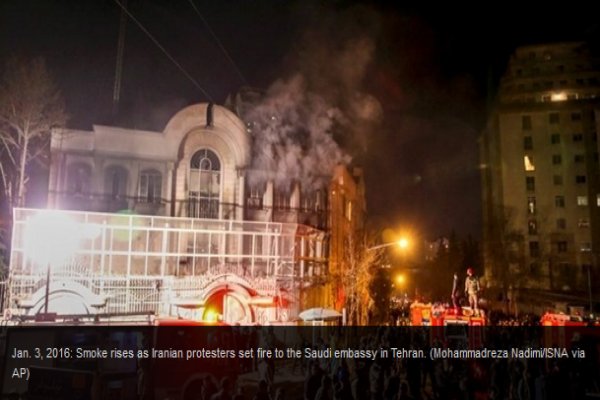 Yesterday, I posted about the Saudi execution of a prominent Shiite cleric and warned that this could lead to an escalation in the confrontation between the Sunni-led Islamic bloc led by Saudi Arabia and the Shiite bloc led by Iran. Even I was surprised at how quickly this confrontation has escalated.

The first link reports that Iran warned the Saudis about “Divine revenge” due to the execution of the Shiite cleric. The second link and third link report that an Iranian mob of protesters stormed the Saudi Embassy in Iran and set fire to it with Molotov cocktails. The third link, from the New York Times, reports that the mob of Iranians “ransacked” the Saudi Embassy. The fourth link and fifth link add that as a result of the burning and ransacking of their embassy in Iran, the Saudis were breaking off diplomatic relations with the nation of Iran, recalling their diplomatic staff and ordering all Iranian diplomats to leave Saudi Arabia within 48 hours.

This is a very serious matter. These kinds of actions have, in past history, served as a prelude to open warfare between nations. We do not know whether this will occur in the situation, but the crisis is rapidly growing in intensity. I just watched the official statement about these events by the Saudi Foreign Minister on Al Jazeera America cable-TV channel, and he charged that Saudi officials requested three times that the Iranian government disburse the Iranian protesters, but that it appeared to Saudi observers that the protesters left and arrived “in shifts” as if the sacking of the Saudi Embassy was being orchestrated by the Iranian government. The Saudi Foreign Minister also noted Iran’s history of not respecting the embassies of other nations–an obvious reference to the Iranian capture and kidnapping of the American embassy staff (an event which happened during the hapless Carter administration). The final link also notes that the Saudis have been quickly backed in their position by the Sunni governments of Egypt, Jordan, Kuwait, and the UAE.

The timing of this crisis could not be worse for the Obama administration. The attack on the Saudi Embassy inside Iran reminds the world of Iran’s lawless seizure of the US Embassy in the 1970s. This escalating sequence of events surely makes the Obama administration look foolish in the extreme if it persists in implementing its “deal” with the Iranians on Iran’s nuclear program and the release of vast sums of money to Iran from frozen overseas funds. For Obama to pursue his near-capitulation to Iran in a climate where Iran is again acting as an international outlaw would make the Obama administration look exceptionally weak and simple-minded if it strengthens Iran at such a time. Saudi Arabia and Israel are united in not wanting Obama’s deal with the Iranians to be implemented, so Iran’s provocative actions are currently playing right into Saudi-Israeli hands.

Again, we do not know if the current escalating situation will lead to war. Given the current Saudi involvement in the Yemen Civil War against the Iranian-backed Shiite Houthis, it doesn’t seem to be a good time for Saudi Arabia to fight Iran. However, as I opined in my previous post, Saudi Arabia is acting as if it knows that it has allies ready to fight on its side if such a war with Iran erupts. If such a war erupts, it may be impossible for Obama to implement his pro-Iranian nuclear deal. If it does erupt, I think it is evident that the Saudis will not be fighting Shiite Iran alone. The Saudis will almost surely be backed by the Sunni nations of Egypt, Jordan, Kuwait and the UAE. Their secret ace-in-the-hole may even be a willingness by the Israelis to fight on the Saudi side. All of these nations, which are increasingly threatened by Iranian militarism, may logically decide that it is better to fight Iran now rather than wait until a future time when Iran becomes stronger. If such a war erupts, think of the chaos that will erupt in the global energy and financial markets. While Russia is technically an ally of Iran, Russia would surely welcome an increase in the global price of oil that would be triggered by such a war. Such an increase in global energy prices would greatly benefit Russia’s economy. What would the USA do in such a war? It certainly can’t fight Iran at the same time it is helping Iran via Obama’s very odd “deal” with Iran re: its nuclear facilities. However, if Obama abandons America’s traditional Saudi allies in any such war, the Obama administration will be seen as treacherous in the extreme by all nations in the region, by America’s allies around the world, and, likely by the American public as well.

We certainly do live in “perilous times” as the Apostle Paul warned would be the case in the latter days of our age. Jesus Christ prophesied that “wars and rumors of wars” will characterize the latter days before his Second Coming. That is certainly coming true. Ezekiel 38:1-6 prophesy that “Persia” (Iran) will definitely be a part of the Russian- and Chinese-led Gog-Magog alliance in the latter days, and the prophecy in Ezekiel 38-39 increasingly looks like it means that the Ishmaelites (the Sunni Arabs) and Egypt (Mizraim) will not be part of that alliance. As I have mentioned in previous posts, Ezekiel 38-39 is a prophecy about a global World War III that will erupt at the very end of the “latter day” period of time. This prophecy does not preclude the possibility of smaller regional wars erupting between various nations of the Gog-Magog alliance and the nations that it will eventually attack at the end of this age. We will have to wait and see it this crisis defuses itself or escalates into something much more serious. If a serious war occurs, it could have an immense effect on the American presidential elections and could even lead to a collapse in the global financial/monetary markets (fulfilling the prophecy in Revelation 17-18).