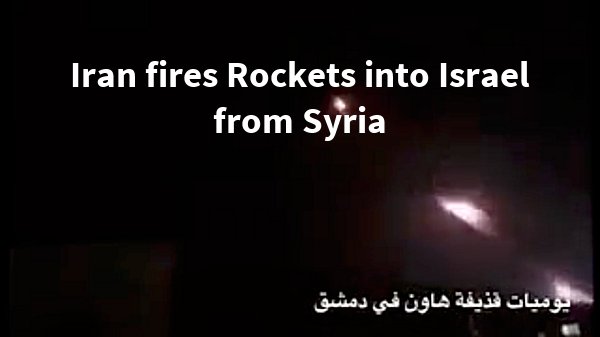 Amidst the very important actions of President Trump withdrawing from the Iranian nuclear agreement and arranging for the repatriation of three American captives from North Korea, another very important event was all but ignored by the American media that I have seen or read. Iranian and Israeli military forces fought each other directly across the Syrian-Israeli border on an unprecedented scale. Indeed, the first link states that the exchange of rocket and missile fire was the largest military battle across the northern Israeli border with Syria since the 1973 Yom Kippur War. I think that fact should be made known to readers as it represents another major escalation in a series of steps that could easily lead to all-out warfare between Israel and Iran (and its proxies).

Both the first and second links offer specific details about the exchange of fire between Israeli and Iranian forces, and I recommend readers review them both. Iran’s Quds forces reportedly fired 20 rockets into Israel from Syrian locations. The Israeli Iron Dome defense system downed some of the Iranian rockets, but some did get through and inflicted “limited” damage at some Israeli military facilities. The Israeli response was much more robust and more effective. The second link states that 28 Israeli warplanes fired a total of about 60 air-to-surface missiles at targets inside Syria and that the Israeli military also fired ten surface-to-surface missiles at Iranian targets inside Syria. This results in a total of approximately 90 missiles and rockets being fired in this exchange. Shelters for Israeli civilians in the Golan region are also being opened in the event of a major war erupting in the northern part of Israel.

These reports are somewhat personal for me as I stayed at an Israeli kibbutz in August of 2000 that was located at the foot of the Golan Heights. When I rose in the morning and looked up at the great mass of the Golan Heights towering over northern Israel’s plains, I was very impressed by how strategic those Heights really are for the security of the Israeli people. From that great height, Syrian artillery used to fire down at northern Israeli cities and farms prior to Israel’s military taking control of those Heights. Israel would be, in my opinion, crazy to ever consider giving the Golan Heights back to any potential enemy. If Iran’s forces took those Heights, they could fire at will all across northern Israel.

My previous post outlined my perspectives on biblical prophecies for the latter days that apply to modern geopolitical and military developments along Israel’s borders, so I assume that many readers have already reviewed them. New readers are urged to review my previous post to see them. Because so many people in the modern world think that the terms “Israel” and “Judah” are synonymous, I urge readers to review my article, Four Reasons the Jews are Judah, as well as Are We Living in the Biblical Latter Days?

What lessons can we possibly draw from the major exchange of fire that has now occurred between Iranian and Israeli military forces? I think the Iranian attack was intended to probe the ability of Israel’s missile defense shield to shoot down incoming missiles; however, if that was the intent it was only partially useful to Iran as Israel’s entire defense network was not involved in this attack. The Israeli missile defense network is a layered system that defends against long-range, mid-range and short-range threats, but Israel didn’t need to activate its entire resources for this level of attack. It would be a far greater threat if Iran ordered Hezbollah to fire its tens of thousands of missiles and rockets at Israel from locations spread across Southern Lebanon. Israel’s response to the Iranian attack made it clear, in my view, that Israel will hit Iran’s forces back harder than Iran can damage Israel. Israel’s response also occurred at a variety of locations inside Syria, and doubtlessly, were directed at targets whose destruction would seriously degrade Iran’s future ability to attack Israel.

As a sidebar to this story, it is worth noting that Saudi Arabia and the United Arab Emirates (UAR), Sunni Islamic nations also threatened by Shiite Iran, were supportive of President Trump’s decision to withdraw from the Iranian nuclear deal negotiated by the Obama administration (last link). If Israel has to fight a major war with Iran, it will find out very quickly who its reliable friends are in the Mideast. Based on the steadily-warming relations between Israel, Saudi Arabia, Jordan, Egypt and the UAR, if Israel has to fight a major war against Iran, I do not think it will be fighting Iran alone.

This situation needs to be watched very closely as it steadily escalating into a larger war. While we hope and pray that such a wider war can be averted, it may be inevitable–given Iran’s stated national goal to “wipe Israel off the map” and Israel’s resolute determination to survive as a nation. Readers can be sure that I will be watching this situation closely and will offer updates as needed. The situation is now so threatening that I urge readers to join me in praying for the safety and security of the Israeli people and for a victory by their military forces in any conflict.

My thanks to a reader who sent me the first link cited in this post.