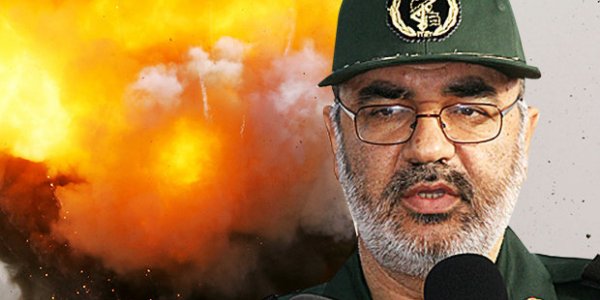 Iran has issued very brazen threats to the USA, and seems to be readying itself for a war with both the USA and Israel. Iran is threatening to attack and destroy the US bases in the Mideast and “open the gates of hell” over Israel (first link). Iran is boasting that its missiles have sufficient range to defeat the USA in any war in the Mideast, and asserts that “Iran is ready for big endeavors” (second link). This sounds like Iran is full of hubris and spoiling for a fight.

Other events indicate an open war may be in the offing. My previous posts have followed the efforts of Iran, Russia and Syria to create a northern Shiite corridor across Iraq and Syria into Lebanon so Iran can move its ground forces right to Israel’s border for a major war. The USA, Kurdish Peshmerga and Sunni tribal forces have been fighting to stop this Iranian/Shiite plan from being successful. The third link indicates a major engagement occurred recently between the two opposing sides. It reports that US F-15s, Apache helicopter gunships, heavy artillery and ground forces were all engaged in a successful battle to stop the Shiites from building a bridge across the Euphrates River. Reportedly, 100 of the Shiite forces (and some Russians) were killed in a US-led ambush and no American casualties occurred. Iran likely thought the Shiite bloc was about to implement a key step in the creation of their Mideast Shiite corridor, and were shocked when US forces stopped them. This account indicates to me that the military actions in the Mideast are close to boiling over into a major war. How many other rather large military battles are being fought about which we know nothing?

If Iran does launch a major strike vs. US bases, it will surely be hit even harder in its own homeland by the inevitable US response. US forces have, no doubt, already selected a wide menu of targets inside Iran for counter strikes if Iran dares to launch attacks on US bases. Such targets will include Iranian nuclear facilities, its missile bases, naval bases and other military targets and perhaps Iran’s energy and oil infrastructures. Iran would do well to realize that President Obama’s policies of pervasive defeatism are a thing of the past. President Trump will hit back hard if Iran attempts any such attack. If Iran does try to “open the gates of hell” over Israel by unleashing Hezbollah to stage a mass missile attack vs. Israel, Iran may experience that it is the region of Southern Lebanon that Hezbollah controls that may become a wasteland.

As a sidebar to this topic, the fourth link is a report about US authorities exposing a Hezbollah plot to steal US military technology from Minnesota’s defense contractors. Hezbollah’s agents especially wanted to steal digital compasses used in drones from the Honeywell Corporation as well as other weapons-related American technologies. This story is a regional story in the media where I live, but I suspect it will not receive much international attention. This story gives us a rare insight into the shadowy world of international arms smugglers and how/where they launder funds and how they tranship cargoes to hide the real purpose and ultimate destination of such shipments. Hezbollah’s strong interest in building better military drones does reveal that they intend to use such drones in any future war with Israel or US forces in the Mideast.

In my many posts about the prophecy of Ezekiel 38-39 and its description of the age-ending world war between the Gog-Magog alliance and the western alliance identified as the one headed by the modern nations of the ten tribes of Israel, there is an important point which needs to be made. The Ezekiel 38-39 prophecy indicates the listing of the allies in either alliance at the end of our age, but that prophecy does not preclude lesser, regional wars between various members of these alliances and their proxy forces. There could be a large regional war in the Mideast involving some of the forces of the two respective Gog-Magog alliances in the years prior to the final apocalyptic war foretold in Ezekiel 38-39. Indeed, the “dogs of war” seem very close to being unleashed in the Mideast. With the Sunni-Shiite blocs having irreconcilable objectives, with Turkey invading Syria to fight the Kurdish forces allied to the USA, with Russian forces embedded within the Shiite bloc and with the northern border of Israel close to a hair-trigger situation with Hezbollah (one Israeli F-16 was shot down recently although the pilots both survived), it does seem like a war is inevitable. I urge readers to monitor events from the Mideast closely, as open warfare seems to be drawing nearer.

For and in-depth examination of how Ezekiel 38-39’s prophecy pertains to our modern nations and events in the years ahead of us, please read my article, What Ezekiel 38-39 Reveal about a Future World War III.