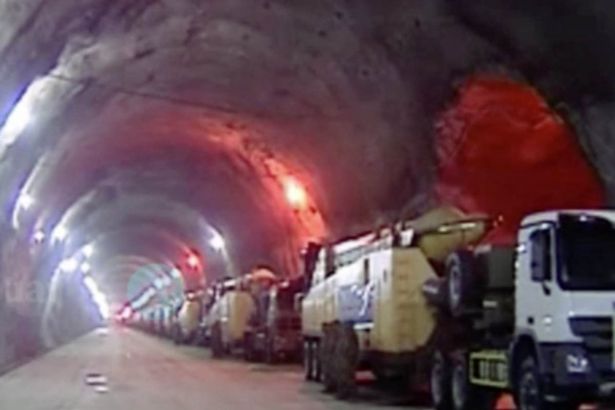 Now that the Iranians have negotiated a nuclear facilitates deal with the Obama administration and various western nations, Iran is openly revealing that it already has secretly constructed a system of underground missile bases which are virtually unreachable by bombs. I have included a variety of establishment and non-establishment links below to confirm this story, which really is quite extraordinary. By releasing this information openly, Iran is really “rubbing it in” to Obama that they duped his administration in the nuclear facilities deal. It is really quite brazen of Iran to reveal their underground bases and to show some of their middle- and long-range missiles housed in these bases. Some of the four links below have overlapping information, but they all offer varying perspectives worth reading. Some of them have remarkable video clips of these underground missile bases as well as the sheltered Iranian missiles inside those bases

According to one source, the Iranians have bragged that they have “hundreds” of such underground bases scattered around Iran. One needs to ask some obvious questions: How many of these underground bases have been doing nuclear-related work toward pursuing nuclear weapons? How many are devoted to making small nuclear warheads for the hidden Iranian missiles? Does Iran already have a supply of nuclear weapons? This revelation about a massive system of underground military bases inside Iran makes the Iranian nuclear facilities agreement even more of a farce than it already was as no one knows where all these bases are and surely western inspectors will never be allowed in many of them. It also seems apparent that the Iranians successfully hid from the CIA and all other western intelligence agencies the existence of these bases. It seems evident the Iranian nuclear deal was negotiated with Iran hiding much relevant information.

This revelation reveals that the Mideast is a far more dangerous place than anyone realized. Iran has developed many missiles that threaten not just Israel and Saudi Arabia, but all US military bases everywhere in the Mideast (and, likely, beyond the Middle East as well). While President Obama has been weakening and downsizing the US military and generally sleepwalking through his presidency on national security matters, Iran (along with its allies, Russia and China) have been greatly increasing their military power and array of weaponry.

Iran is identified as “Persia” in the prophecy in Ezekiel 38 (verse 5) about the latter-day alliance called the Gog-Magog alliance in my posts. The rapid military build-ups of Russia, China and Iran and their convergence into a military alliance confirms beyond any shadow of doubt that Ezekiel 38-39 is meant to address our current modern times–which the Bible identifies as the “latter days” of this age.

The links below reveal that Iran is more of a military threat than was previously grasped. Israeli Prime Minister, Benjamin Netanyahu, now looks very prescient in his urgent warnings about the Iranian military threat in his speeches to the US Congress and the UN. The USA urgently needs a new leader who is as realistic, tough-minded and patriotic in America’s interests as Netanyahu is in representing Israeli interests. Unfortunately, the American election isn’t until November 2016, and a new president will not be sworn in until January 2017. That being the case, things are likely to get worse before they get better.