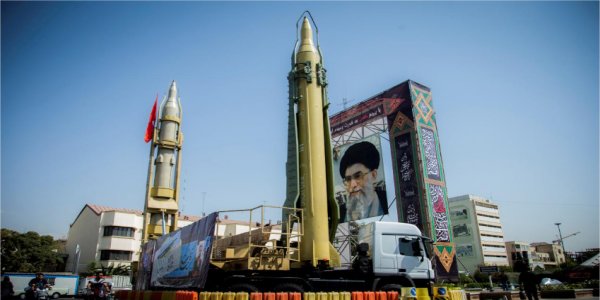 Iran has just escalated the military tensions in the Mideast, and it has moved the region closer to a major regional war. The first link, second link and third link offer details about a revelation that Iran is now moving missiles into neighboring Iraq, placing them almost surely within firing range of both Riyadh, Saudi Arabia and Tel Aviv, Israel. The reports indicate at least “tens” of missiles have already been moved and that Iran is also building missile production facilities inside Iraq. I urge readers to consult a Mideast map to see how close Western Iraq is to Israel. It must also be remembered that Saddam Hussein’s regime fired many old Soviet-era Scud missiles into Israel from Western Iraq during the Persian Gulf War so Israel is easily within range of many firing locations within Iraq. Israel has warned that it may use military force against these Iranian missiles and that Israel is no longer limited to attacking Iranian military forces only inside Syria. The fourth link offers readers a variety of other perspectives on this escalation of tensions in the Mideast.

The entire Mideast is sliding steadily toward a larger war. While the Shiite central government of Iraq is allied with Shiite Iran, there are regions of Iraq which are majority Sunni. The Sunnis are chafing under Shiite rule inside Iraq and resent Iran’s dominance over Iraq. The seventh link and eighth link document a major outbreak of Sunni vs. Shiite violence in the Iraqi city of Basra (located very close to Kuwait, Iran, and the Persian Gulf).  One of the links reveals photographically how extensive the uprising was as the protesters burned a large Iranian consulate building. Iraq may not survive as a nation within its current borders. The northern Kurdish region is almost independent already albeit without international recognition. Sunni regions of Iraq have no desire to be ruled by a Shiite government, as the uprising inside Basra confirms. This situation argues that a civil war within Iraq may be inevitable unless the nation can be peacefully partitioned.

Also, the Syrian rebels have been pushed back into their stronghold city of Idlib. Nations are trying to avert another bloodbath when Russian-backed Syrian government forces attack the city. The leaders of Turkey, Russia, and Iran have just met to try and find a peaceful way out of an armed attack upon the city. Apparently, no agreement was reached. Given the fact that Syrian President Assad has used chemical weapons on his own people in the past, there is a real fear he may do so again against the people massed inside Idlib. President Trump has warned Syria not to take such an action. Trump has previously sent cruise missiles at Syrian military targets and may do so again if Syria uses chemical weapons (or perhaps its “barrel bombs”).  Even France has warned that it will militarily strike Syria if it uses chemical weaponry vs. Idlib’s population (final link). There are many military forces with confusing alliances and relationships in the region. Russia backs Assad, but it also has been careful not to allow Russian forces to become entangled with Israeli forces during the Israeli attacks against Iranian weaponry inside Syria. The American and Russian forces have also been careful to keep their forces “disengaged” even though both have been very active in the region. Turkey seems to be walking a solitary road without strong allies in the region at present. Indeed, Turkey has all but alienated itself from its traditional NATO allies, and has further isolated itself in the region by cozying up to Shiite Iran even though Turkey is Sunni.

Iran has declared its intention to “wipe Israel off the map.” The persistent placement of Iranian military forces and weaponry inside Syria, its moving missiles into firing positions inside Iraq to be aimed at Israeli territory and its close relationship with the Syrian government and Hezbollah indicate Iran is very serious about destroying the Israeli nation. Israel is just as determined to survive and to do whatever is necessary to counter Iran’s goals. Iran is steadily pushing the Israelis toward a confrontation. Iran seems to be spoiling for a fight, and Israel is ready to give them one. Indeed, if Iran pushes Israel into military action, I expect the Israelis to not only vigorously defend themselves but also to attack Iran’s nuclear facilities and key oil infrastructures inside Iran. Genesis 49:8-12 are a prophecy about the tribe of Judah (the Jews/Israelis) in the latter days of our age. This prophecy applies to our modern time. It includes a prophecy that the Jews will be militarily victorious in that time and that could only be possible when the Jews again had their own nation-state. That happened in 1948, fulfilling the prophecy in Zephaniah 2 that the Jews would have a nation again in the old Promised Land in the latter days. Jesus Christ prophesied that “wars and rumors of wars” would characterize the time on earth just prior to his return, and that is the current state of our world.  Ezekiel 38-39 prophesy about a final great World War III and Zechariah 12 and 14 are prophecies about the Jewish theater of warfare in that final climactic war. I currently believe we are years away from that final war which will end our age and jeopardize the existence of “all flesh” on earth (Matthew 24:22). However, those prophecies do not preclude the outbreak of major regional wars prior to the final climactic world war. Just such a regional war may be nearing in the Mideast. One could even observe that it is starting to look inevitable. Iran is pushing the region toward a war, and they just may get one. Iran may not like how the war ends.

For more detailed information on the topics mentioned above, please read my articles, Four Reasons the Jews are Judah and Are We Living in the Biblical Latter Days?

My thanks to a reader for sending me a link cited in this blog post.