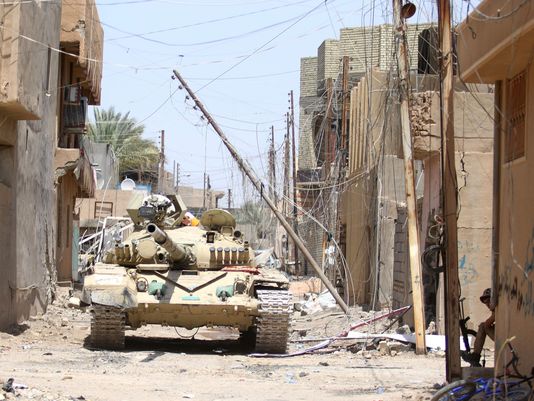 You may have noticed media articles that the Iraqi army is driving back ISIS from more Iraqi territory. That narrative represents an effort by the Obama administration to put a favorable “spin” on events inside what used to be Iraq. The first link, from USA Today, gives the “spinned” narrative which does not even mention the major Iranian military presence inside Iraq which is pushing ISIS back. It says not a word about any Iranian forces inside Iraq.

The second link and third link, from the Washington Post and Business Insider, give the real picture of what is happening on the ground. The second link reports that Iran is arming and funding a force of 100,000 fighters who answer only to Iran. It also includes excellent maps of the current situation on the ground inside what used to be Iraq. The third link reports the Iranian-backed Shiite force inside Iraq numbers between 100,000 and 120,000 fighters and the regular Iraqi army has dwindled to a mere 48,000. Obviously, it is the Iranian-controlled fighters who are seizing territory from ISIS inside Iraq’s old borders, not the shriveled Iraqi army. The Sunni tribes have great reason to fear this large Shiite, Iranian-controlled force which has been let loose inside Iraq.

I see a parallel which is worth noting. At the end of World War II, the Soviet Union refused to withdraw from territory in Eastern Europe that it conquered from the Nazis, but kept control over it and turned them into occupied nations. I’ll bet that when ISIS is finally defeated, Iran will not withdraw its forces from that portion of Iraq which they have conquered. Expect Iraq to become a Shiite puppet state of Iran after the ISIS war. The old Iraq may be split three ways: An Iranian-dominated eastern portion, a Kurdish state in the north and a Sunni region in the west protected by Saudi Arabia and Jordan. The increasingly autocratic leader of Turkey may also seize a portion of northern Iraq for himself to keep the Kurds from having it.

This does have a biblical connection. Revelation 16:12-21 describes a sequence of events leading to the end-time battle of Armageddon. It begins with the “kings of the east” invading westward across the Euphrates river which means that they are headed toward Israel, the nation Iran wants to “wipe off the face of the earth.” Zechariah 14 adds more information about the climactic age-ending battle as divine intervention occurs to save the Israelis as a great war is raging. Revelation 16 and Zechariah 14 are prophesying about the same war and the same battle. Ezekiel 38-39 also prophesies about this same war, but in a different theater of battle. Ezekiel 38-39 describes World War III’s outbreak and outcome as it affects the latter-day nations of the ten tribes of Israel and their allies. Zechariah 14 shows the war as it unfolds in the land of modern Judah–the Israeli nation. Modern events indicate that Iran is, using its forces inside Iraq, seizing control of the Euphrates River region, which is exactly what we would expect from the prophecy of Revelation 16. As I see it, the great military alliance from Asia led by “the kings of the east” is the same force labeled as the Asian Gog-Magog alliance in Ezekiel 38-39.