IRAN BOASTS OF MISSILES THAT CAN HIT ALL OF ISRAEL 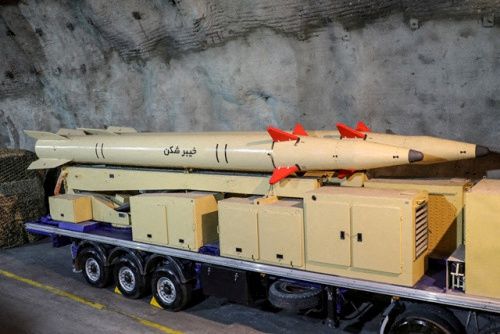 As the world’s eyes are on a possible Russian invasion of the Ukraine or a Chinese invasion of Taiwan, there is another war threat which is also just as ominous but it receives little publicity given the aforementioned superpower threats. Iran’s stated national intention of “wiping Israel off the map” is known to many, but Iran boasts that it has gained new capabilities to attempt to do that very thing. There are reports that Iran now has ballistic missiles that can hit all of Israel as well as the USA’s military bases in the Mideast (first link and second link). The new Iranian missile reportedly has a range of 900 miles, and both the first two links show missiles (apparently the new Iranian missile) which are mounted on a transporter with wheels. If this missile is mobile, it will make it harder to locate and attack. The first link states Iran calls the missile “only a deterrent,” but since Iran’s stated objective is to destroy the nation of Israel that is hard to believe. It seems almost certain that Iran is building missiles which can hit Israel with nuclear warheads as soon as Iran can build them and mate them to the missiles.

How soon will it be until Iran actually has nuclear bombs? The third link reports that top administration officials have briefed US senators that Iran’s nuclear program has reached a point where it could have a nuclear bomb “within weeks.” The link cites an estimate that it may only be three weeks until Iran succeeds in having a nuclear bomb while another estimate is cited as giving the time-frame for an Iranian nuke to be only two months away. Either estimate, if correct, ought to cause considerable concern in anyone who reads this. What is not clear is if the first Iranian nukes are being built to be fitted to the ballistic missiles that can reach Israel. Since Iran has no meaningful strategic bombing capability, it is almost certain that Iran would build nukes which can be fitted to the missiles than can reach Israel.

This is very ominous because Israel cannot allow Iran to develop a deliverable nuclear weapon. Doing so would allow Iran to achieve the ability to actually “wipe Israel off the map.” This should also cause consternation in such Arab nations as Jordan and Egypt because it is not known how good the Iranian guidance systems on those missiles will perform if there are electronic jamming efforts made against them while they are in flight. Iranian missiles fired at Israel could hit locations in Egypt or Jordan if they are just slightly off-course.

Israel is deadly serious, as they should be, about this increasingly imminent Iranian threat. The fourth link reports that in January Israel conducted “secret ‘massive attack’ drills” to prepare for a large-scale military attack vs. Iran’s nuclear program sites. It involved “dozens” of warplanes and aerial refueling drills for a long-range mission. It also quotes a US State Department official as saying that talks to reach some kind of nuclear deal with Iran are going so badly that any such deal “will become irrelevant in a few weeks” apparently because Iran’s nuclear program will become a fait accompli. This “secret” war exercise is no longer a secret. Perhaps news of it was leaked to the media to give Iran a warning that Israeli action is imminent if Iran does not back off on its nuclear program.

The link states that the Israeli Prime Minister, Naftali Bennett, has declared that any such attack vs Iran “would be fought on several fronts.” That means an Israeli attack would not be limited to an extended-range attack by warplanes. As an indication of what he may have meant, the link also reveals that the US and Israeli navies recently conducted a military exercise off of the Iranian coast. This means that Israeli naval vessels must be in the northern Arabian Sea just south of Iran. Those Israeli vessels may include some of the sophisticated Israeli Dolphin submarines which are reportedly able to fire cruise missiles. In the event of war, Israel’s very-capable Mossad would almost surely conduct strategic sabotage missions inside Iran as well. A mass cyber-attack vs. Iran is also very possible. Additionally, does anyone know the range of Israel’s latest Jericho ballistic missiles? I’ll bet they could hit Iran also if used.

The US had an official observer involved with the Israeli aerial attack exercise, and the fifth link reports that the USA is deploying a squadron of F-22 warplanes (some of America’s best) to the UAE. Ostensibly, this deployment was to help protect the UAE from ballistic missile attacks fired at them from the Houthis in Yemen (the Houthis are using Iranian-supplied missiles). However, I would not be surprised if the deployment of the American F-22s is also intended to pre-position American support for any Israeli attack against Iran.

While Iran may dream of annihilating Israel, biblical prophecy assures us that will not happen. Zechariah 12:1-9 prophesy that God himself will fight against any nation that seeks to destroy Israel and verse 6 adds that God will give victory to Judah (the Israeli/Jews) if they have to go to war in the end time. Zechariah 14 prophesies that while Judah (the Israelis/Jews) will be heavily involved in a war at the very end of our age, there will be divine intervention which annihilates the invaders of the Israeli nation. Indeed, verse 12 tells us the flesh will melt off the invaders’ bodies before they have time to even fall over. That sounds like the very type of death depicted for a group of Nazis in the famous movie, Raiders of the Lost Ark. It is also possible that it could depict the effects of nuclear weaponry being used just before the Messianic Age begins. The key point to remember is that God will not allow the Israeli nation to be destroyed, but that will be the fate of nations seeking to destroy it (Zechariah 12:9).

Finally, we live in a world where Russia, China and Iran are all very seriously threatening other nations with invasion and/or destruction. Another biblical prophecy, Ezekiel 38-39, foretells that in the “latter days” of our age, Russia, China and Iran will be allies in a mass attack against the western bloc of nations in the world. That prophecy clearly describes a global World War III which will occur right at the very end of our current age. Russia, China and Iran are already acting together to threaten other nations, confirming that we are heading toward the inevitable fulfillment of Ezekiel 38-39. For an in-depth examination of Ezekiel 38-39 and many other latter-day prophecies, please read my article entitled, What Ezekiel 38-39 Reveal about a Future World War III. If you do, you will be surprised at how timely and accurate biblical prophecy really is.