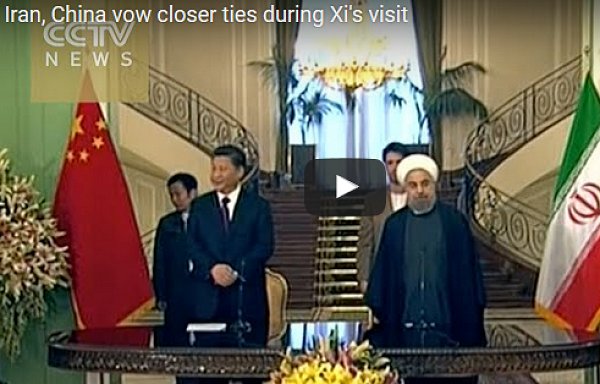 The ink on the US-Iran nuclear and sanctions-lifting agreement has barely dried, but Iran is already making its future direction very clear. Iran and China have signed a “strategic” partnership agreement that is very wide-ranging. In words that could barely hide Iran’s contempt for the leaders of the USA and its western allies, China inked a new major pact with China’s president, who traveled to Iran for the ceremony. It includes a reported multi-year $600 billion expansion of trade and financial links between China and Iran and defines their strategic partnership as one which includes “military and security” cooperation. The two links below offer information about the strategic partnership between China and Iran, although the second link goes into greater detail. Russia is already a strategic ally of China and is a close ally of Iran as well.

This strategic pact between China and Iran cements the fulfillment of the prophecy in Ezekiel 38 that modern Iran (“Persia” in Ezekiel 38:5) would join Russia, China and other nations in a massive alliance (during the latter-days of our age) known generally as the Gog-Magog alliance. This prophesied alliance is coming together very rapidly, and its coming into full reality at this time proves that (A) the Holy Bible is the inspired Word of the Creator God and that (B) we are living in the biblically-prophesied time called the “latter days.” Only the Divine guidance of modern world events could so precisely fulfill a biblical prophecy written about 2500 years ago! No one should have any doubt on these conclusions any longer. Ezekiel 38-39 prophesy many details about the final World War III that will be started at the end of our age by the surprise attack of the Gog-Magog alliance vs. the modern nations of the ten tribes of Israel and all their global allies. Many modern nations have their latter-day destinies revealed in Ezekiel 38-39’s prophecy. For an examination of the roles to be played by modern nations in the future, please read my articles, What Ezekiel 38-39 Reveal about a Future World War III, The USA in Bible Prophecy, and Japan’s Role in Prophecy. While the full documentation about which modern nations have descended from the ancient ten tribes of Israel is well-documented in my books on the topic (which can be ordered on my website), reading these three free articles will give readers a great deal of information regarding what Bible reveals will unfold in coming years.