INVISIBILITY TECHNOLOGY: HAS IT BEEN SECRETLY DEPLOYED ALREADY? 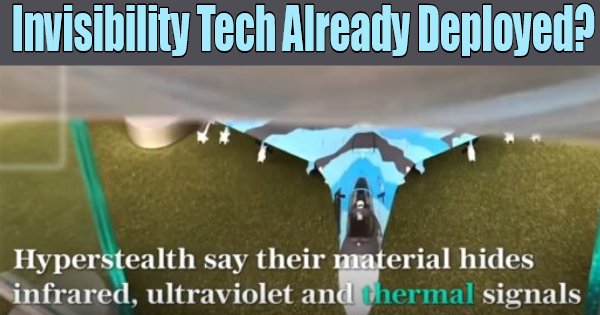 Long-time readers will recall that years ago I wrote a series of posts on the subject of the new “invisibility” technologies being developed, and wherein I described scenarios where it could be employed in the future to fulfill biblical prophecies about the great deceptions that would occur in the latter days. It has been years since I have written on this subject, but now there is more information to bring to readers’ attention on this subject. In the previous decade, there were for a time many articles about the invisibility (or “cloaking”) technology projects undertaken by many major nations on the earth who were developing this technology–often for military applications. Those nations included the USA, the United Kingdom, Japan, and others. The fact that so little has been made public about this cutting-edge technology in recent years indicates to me that the nations want to keep the true extent of their development (and possible deployment) of this technology a secret. Given the obvious military advantages of being able to render your soldiers and weaponry invisible, that is understandable.

However, a Canadian company has released information and video-clips about the type of invisibility technology that they have now developed (first link and second link). Invisibility technologies involve some type of “bending light” around an object to render it invisible to the naked eye. This new Canadian application claims that besides rendering an object or person invisible to the naked eye, it also hides a cloaked object from infra-red, ultraviolet and thermal radiation. If it can successfully do all that, it would be quite an achievement, and the military applications for this technology are numerous. The first link offers videos of how it works, and the second link offers more detail on the technical details of how it is accomplished.

Clearly, if a nation can hide its warplanes, tanks, armored vehicles and soldiers inside invisibility cloaks, it will have a huge advantage over a nation without such technology. Personally, I find the silence about the national efforts of the major nations on the extent of their advances in the field to be deafening. The conclusion I draw about the public silence regarding the national military efforts on this topic is that these efforts have advanced considerably since it was last publicly revealed to any extent. If the private Canadian company featured in links one and two can develop a convincing invisibility cloak on its own R&D budget, think what the USA can do with virtually limitless secret funding devoted to DARPA/Pentagon projects to perfect this technology. Nations such as the UK, Japan, Russia, China, Israel, France, and India must also be working to develop and deploy this technology. Since this technology gives such a huge advantage to any military force with this technology, any nation serious about national defense can hardly refrain from developing their own invisibility technologies as well.

The third link, fourth link, and fifth link are my posts to this blog from 2007, 2009 and 2010. Not all the links attached to those posts may still be operative, but I urge readers to read those posts to learn a great deal about how nations were developing this technology. More was being released publicly a decade ago about this technology than today. Some technical details were then released about how this technology could be created, and one link describes how silver is the key element needed to develop invisibility technologies. One report from that time indicated the UK had already then developed an invisibility cloak that could be used to hide weaponry as large as tanks. If that is true, imagine how much further advanced the technology has been developed by now!

Genesis 11:6 states that mankind can reach a tipping point in knowledge development so that “nothing will be restrained from them which they have imagined doing.” Mankind’s ability to invent new technologies is incredible, and the development of high-tech knowledge of all kinds in the latter days of our age was predicted in the Bible (Daniel 12:1-4). Mankind’s movies have “imagined” invisibility cloaks in ScyFy movies. The ones I’m most familiar with is the invisibility cloak deployed by Klingon spacecraft in the Star-Trek movies and TV programs, and the ring which made Bilbo and Frodo Baggins invisible in the Lord of the Rings movies. What was once merely imaginary is now becoming a reality.

In the third, fourth and fifth links, I offer specific examples of how invisibility technology may fulfill several latter-day prophecies. I urge readers to review those previous posts for a detailed description of how this occurs. Since it exists in the enclosed link, there is no reason to duplicate the information in this post. The prophetic possibilities are just as relevant today as when I first wrote them a decade or more ago. However, I will offer some teaser information. Revelation 13:4 foretells that when the beast system comes into global power for a short time in the years ahead of us, the nations will be shocked at new technologies unveiled by the beast power as mankind will say “Who is able to make war with him?” Obviously, this means previously unknown military weaponry and technologies will be unveiled to ensure global compliance with the beast’s authority. Can you imagine the effect it would have when/if what were previously referred to as UFOs drop their invisibility cloaks and reveal their existence openly to the world? This is now technologically a very real possibility. Revelation 13:11-15 prophesy there will be a false prophet of some kind who will be able to do “miracles” in the sight of mankind to dupe people into thinking God is energizing the beast system’s secular and spiritual leaders. II Thessalonians 2:3-11 also prophesies about a final spiritual figure who will dupe many. This prophecy includes a warning in verse 9 that some of the miracles will be “lying wonders” (KJV). The Greek word translated “lying” is “pseudos” which is the root word for the English prefix “pseudo,” meaning something which is fake, spurious or counterfeit. People or objects which suddenly appear out of nowhere or disappear into the ether (pretending to be angels, spirit teachers or Jesus Christ himself) could easily dupe almost everyone even though they are merely human beings engaging or disengaging an invisibility cloak. Matthew 24:24 warns that the deceptions of the latter days would be so impressive that even God’s own “very elect” would almost be taken in by the intense deceptions. I hope this introduction to the material in the third, fourth and firth links about invisibility technologies and biblical prophetic fulfillments will motivate you to read my previous posts on this topic. For abundant evidence that we are living in the biblically-prophesied latter days when these prophecies will be fulfilled, please read my article, Are We Living in the Biblical Latter Days?

One thing I think we can be sure of: the actual state of the high-tech projects to deploy invisibility technologies is far more advanced than anything which is being revealed publicly. One wonders how many weapons systems or propaganda tools have already been deployed and are just waiting for the day when Revelation 13:4 prophesies will likely be unveiled to the general public? You need not be surprised when this occurs. You already have been warned about how invisibility technologies could be part of a future great deception that will be perpetrated on mankind. Those “lying wonders” prophesied in the Bible will be the ultimate in “fake news.”