INDONESIA TO BUILD A NEW CAPITAL CITY AWAY FROM JAKARTA 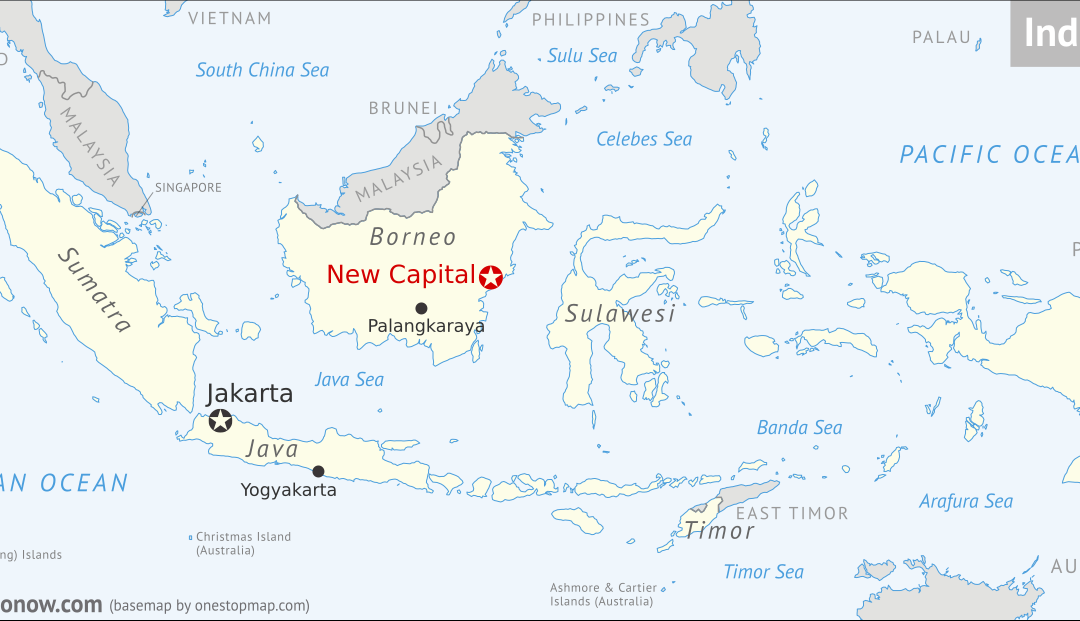 The world media is now focused on three main areas: Covid-related stories, the Russian-Ukrainian situation and various political issues. Many worthwhile events are being ignored or given little attention. I believe one such under-reported event is the announcement by the government of Indonesia that it is going to move its capital city from Jakarta on the island of Java to a new location on the island of Borneo (first link). While other nations have occasionally relocated a capital city, this is a remarkable event, and it involves immense amounts of planning, money and time. Let’s examine this situation and the stated reasons for this move as well as a possible reason which is perhaps not being stressed enough.

Java and Jakarta are horribly over-populated and therefore badly congested. Pollution is worsening and Jakarta is sinking into the sea so quickly (geologically speaking) that it is predicted that one-third of the city of Jakarta will be under water by 2050. This relocation is being billed as a “sustainable” move, but the link notes that the creation of a sprawling new capital city on Borneo will destroy a large swath of rain-forest and eliminate a lot of native wildlife habitat (obviously both are bad environmental impacts). Strangely, the committee planning this relocation reportedly includes a Japanese billionaire, the Crown Prince of Abu Dhabi and the ever-reliable globalist, former Prime Minister Tony Blair of the United Kingdom. I assume there are some un-named prominent Indonesians included somewhere on that committee as well. The relocation plan is off to a rapid start, and one of the first governmental buildings to move will be the Presidential Palace which should be finished in Borneo sometime in 2024. The second link relates that this relocation plan was in place as early as 2019, but had to be delayed due to Covid issues.

The first link states that Jakarta is “rapidly sinking into the Java Sea.” It isn’t difficult to envision that global warming activists will hail this move as “proof” that global warming is “raising sea levels” and other port cities are going to be swamped as well. If they assert this, they will be wrong. The real reason that Jakarta and other coastal cities are being threatened by encroaching seas is not that the seas are rising but rather that the coastal cities are sinking. In 2019, I wrote a post that documented this very fact, and it is included in this post as the third link. Many coastal cities have huge populations and they have an immense and growing need for fresh water. They have been pumping out prodigious volumes of fresh water from underground aquifers and their cities are sinking due to the subsidence of the ground on which they are built due to the depletion of the ground water.

I’d like to suggest another important reason for this relocation of Indonesia’s capital city. The first link barely mentions it by citing earthquakes as an additional reason. I think this may be more of a reason for the relocation than is being admitted. There are signs that the Pacific Rim region where earthquakes and volcanoes are common is in a process of waking up. Indonesia was devastated in 2005 by an underground earthquake which led to a tsunami which destroyed a large portion of Indonesia’s large island of Sumatra and killed circa 200,000 Indonesians. Indonesia is in a particularly active seismic region of the Pacific Rim zone. While the relocation of Indonesia’s capital city was in the works at least as early as 2019, the recent massive volcano in Tonga can only serve to hasten the implementation of the relocation of Indonesia’s capital out of the island of Java. If a great earthquake hit Jakarta while the nation’s government was there, it would paralyze the nation and all its rescue efforts. Indonesia clearly has valid reasons to move its capital. The risks of earthquakes and volcanoes are very real in the Indonesian islands. I assume that before deciding on a new location for its capital city, the Indonesian authorities carefully researched past seismic events throughout Indonesia so that they selected a new site which was relatively less-threatened by seismic activity.

This story fits perfectly with my previous post concerning the giant volcano which hit Tonga. The world press did not stress the fact that the volcano in Tonga was so huge that it was one of the most powerful ever recorded. Indeed, it reportedly blew up an uninhabited island with the force of “hundreds” of Hiroshima-level atomic bombs. This fact should also give a new sense of humility to all mankind. The USA spent years of effort and immense amounts of money to develop the first small atomic bombs in the Manhattan project in the 1940s. The forces of nature are so immense that it can produce hundreds of times that kind of power within seconds in a single natural event. Mankind’s total efforts on earth are dwarfed by the powers that the Creator God has placed into our planet. Isaiah 40:15-17 states that God’s power and perspectives are so vastly higher than mankind’s that “the nations are as a drop in a bucket” in his eyes and that “all nations are before him as nothing.” Mankind needs to be far more humble toward the Creator Being who made this planet and all creatures living on it. For a brief insight into what may be in mankind’s future during our current “latter day” period, I suggest you read Isaiah 24. Its language describes immense planetary forces being unleashed that will kill large numbers of people. The language indicates either an impact from a heavenly object (comet, meteor, etc.), immense tectonic activity or both.

For more information on the Bible’s prophecies about tectonic activity, I suggest reading my previous post, and it would be worthwhile to read my article, Are We Living in the Biblical Latter Days? Long-time readers of this blog have surely read this article, but I mention it frequently in my posts as it is very important for new readers to be aware of the vitally-important information in it.