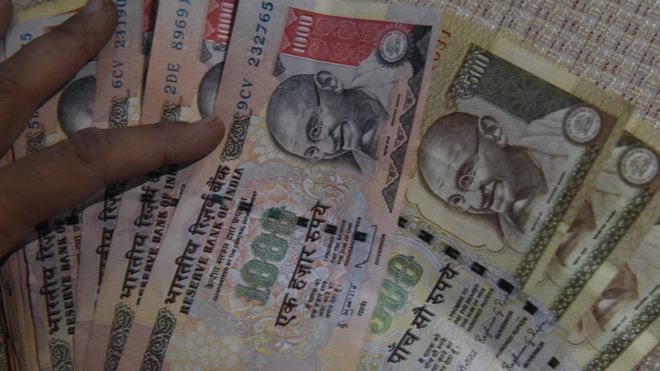 The nation of India has taken a huge step toward a cashless society. It is banning its two highest denomination notes–the 50- and 100-rupee currency notes–from circulation, and soon these currency notes will not be honored as valid money in India. This action has caused a panic in segments of the Indian population (first link). The second link reveals how draconian this action is. It reports that this action removes 80% of all cash circulating as currency in the nation of India. That is an immense amount of money removed from circulation. The third link gives an analysis of how this will affect India and its people. The most immediate effect is that people are stampeding to buy things to get rid of their large currency notes before they become valueless.

Why did India take such a major action? The links report that the Indian government wanted to eliminate as much of the black market as possible with this action. That is actually an understandable goal as the third link reports that bribery and corruption in Indian’s economy is widespread. The establishment portions of India will all benefit from this action. The government will benefit from a huge reduction in the black market and forcing a large amount of money into official repositories and places where it can be taxed. Any money in the banned rupee notes deposited in banks will help re-liquify the banks and make more money available for bank loans to help India’s industrialization and modernization program. Merchants of all kinds will benefit as people spend as much of their soon-to-be-banned notes while they can purchase real goods and services for them. I was surprised to learn in the third link that the price of gold in India has skyrocketed to the US equivalent of $2,294 per ounce–if any physical gold can be found to buy. I was also surprised to learn that India has a high tax on imported gold which means that much of India’s imported gold comes into the nation via smuggling. As an aside, it is noteworthy that the huge price increase in gold in India has not been reflected in the price of gold in the USA yet.

In one fell swoop, India’s elimination of 80% of the cash in circulation is a huge step toward a cashless society. While India has very real black market issues to address, I wonder if the global community will be watching how this cash ban affects internal order and India’s national economy. Many readers of this blog are familiar with the prophecy of Revelation 17:16-17 that an end-of-the-age beast power will have massive central control over the purchases of goods and services all over the world. India’s currency ban is a step in that direction, but it does not yet involve any “mark” being received in anyone’s hands or foreheads. Also, the fulfillment of Revelation 17-18’s prophecy about the collapse of Babylon the Great’s current global monetary/financial system could be fulfilled by a global collapse in current fiat currencies.

Let’s consider whether this Indian action may be replicated in the USA or other western nations. The black markets in the USA and western nations are a much smaller portion of the overall economy of these nations which makes such an action less likely (but not impossible) to occur. What people should consider is that just as India made this major currency pronouncement with no warning, it is virtually certain that other nations implementing a similar cash recall or cash ban will also give their citizens no warning either before doing anything like what India did. Looking at it from an American perspective, a similar action in the US would be an action wherein $50 and $100 currency notes would be eliminated from circulation, and give citizens only so much time to deposit them in banks or spend them. If that happened, I’m sure banks would report to the government anyone depositing large amounts of cash, and merchants would do so as well. There could also be panic buying of gold and silver as occurred in India. The US government may have some problems implementing such an action here. If I recall correctly, the US has a law that any money printed or coined by the US government must remain legal tender. However, since US currency is now printed as “Federal Reserve Notes” by the US Federal Reserve Board (not the government), any such US law may not apply to current US cash notes in circulation. Such an action wouldn’t do much to stop the drug trades conducted in cash unless a recall of US currency notes applied worldwide, not just within the USA. That could devastate the drug traffickers as all nations would have put in place governmental notification rules for all banks and merchants who receive large cash infusions in deposits or purchases so drug traffickers and their money launderers could be identified and arrested..

So India’s action is not a fulfillment of Revelation 13:16-17, but it is step in that direction as India is such a huge nation with so much currency that will be removed from legal status. I’ll close with thoughts on how Revelation 13:16-17’s prophecy may unfold. Christians (including me) have generally thought that this prophecy’s language means a 100% elimination of all cash in circulation. That may still happen, but we are not at all sure what the Apostle John actually witnessed in his vision of the latter days in terms of financial transactions (or his ability to describe them). If India’s action is any precedent to consider, the beast power may leave coins and small bills in circulation so people can buy snacks, gasoline, get haircuts, meals at restaurants, give tips and do other types of commonplace daily occurrences which are so small that they do not represent any threat to any beast system which will impose controls on all monies used for any large or medium transactions. Metal coins also would be detectable at border crossings, so no one is going to move a massive amount of heavy coins across national lines to launder any money or to evade taxes. Its imposition may vary from nation to nation as well. In the USA (and in other nations) coins may remain in circulation for small daily transactions. We simply don’t know yet how this prophecy will be fulfilled. It may not be fulfilled in as apocalyptic a manner as Christians expect. How else could Matthew 25:1-11’s prophecy about the ten virgins come true? In that prophetic parable, the “virgins” (believers) are obviously not feeling that things are “bad enough” in world events to expect Jesus Christ’s coming for them any time soon, but he comes anyway way ahead of their perceived expectations. Many prophecies are subject to more than one interpretation and can be fulfilled in more than one way. I think God deliberately made some prophecies somewhat cryptic in their language as God wanted to preserve flexibility for himself in how he fulfilled them in the latter days. But that is just my viewpoint.

At any rate, the draconian action against cash in India bears close watching. It may be that a “war on cash” has begun, and India is now just an initial experiment to see how such an action affects a large economy.