INDIA AND JAPAN TAKE STEPS TOWARD A FORMAL ALLIANCE 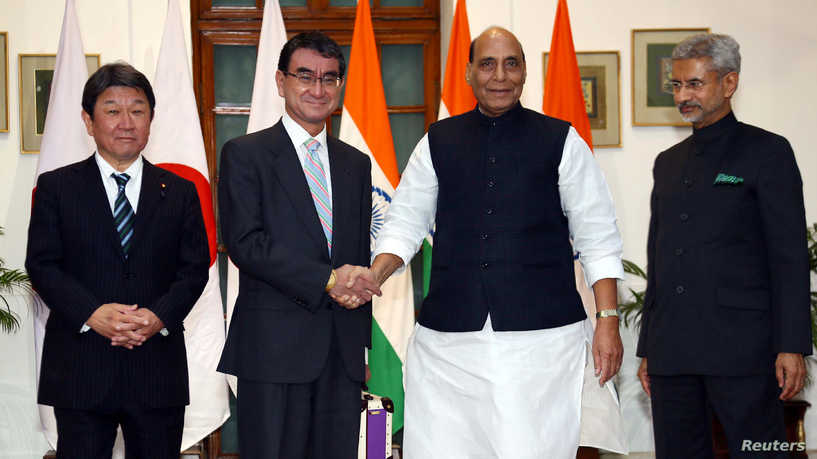 An event occurred in Asia that deserved far more media coverage than it received. The highest-ranking diplomatic and military officials of India and Japan just met in what is called a “2 + 2” format meeting that signals much closer ties between the nations who conduct such meetings. The first link and second link are from American media sources which offer just a “bare bones” description of the meetings. These meetings to draw India and Japan together were prompted by growing concerns about “China’s growing footprint” in the Indo-Pacific region.

The third link is from the Indian media coverage which offers much more in-depth coverage. It notes that the two nations are drafting a pact that will be signed by their respective heads of state, and which will also allow the military forces of the two nations to “share defense supplies, fuel and ammunition” as necessary. These meetings were hailed as evidence of  a “growing strategic partnership” between the two nations which also attests to the “growing strategic convergence” between India and Japan on political and military matters. The fourth link from the Japanese media adds even more details. The new joint defense pact between India and Japan is expected to be signed this month, and the two nations will be welcoming “trilateral defense with the United States” as well. India and Japan will cooperate on developing military robotics programs, and will soon conduct a joint air force exercise between the two nations. The article adds that Japan recently conducted such air force exercises with the USA, the United Kingdom and Australia.

Clearly, the very close cooperation between India and Japan indicate the two nations will soon have a strategic alliance designed to defend both nations from Chinese militarism and aggression. It is also clear that these nations will be working ever closer with the USA, the United Kingdom and Australia in a growing alliance of nations jointly threatened by China. The fifth link reports another strategic development: a joint naval exercise of the American and British navies in the South China Sea. This is apparently the first such joint naval warfare exercise of the American and British navies conducted in the South China Sea. All these actions are very important messages to China that China’s aggressive effort to assert a unilateral claim to virtually the entire South China Sea is unacceptable to many nations and any such effort by China will be opposed with force. The fifth link also lists the Philippines, Vietnam, Malaysia, Taiwan and Brunei as nations whose interests are threatened by China’s bellicose claims in the South China Sea. Personally, I would add Singapore and Indonesia as additional Indo-Pacific nations militarily threatened by China.

China itself is inadvertently acting to hasten the formation of anti-Chinese military alliances throughout the Indo-Pacific region. The sixth link documents that China has been conducting a cultural “genocide” vs the Uighur people of Western China. China’s oppression of the Uighurs is overwhelming, as China has imprisoned approximately one million Uighurs in concentration camps to destroy the Uighur culture, language and religion and compel the Uighurs to become submissive Communist Chinese in their mindsets and behaviors. In doing so, China has displayed a very malevolent and dark side of its national intentions toward other nations. These camps are not actual death camps so far, but that may come in time. It is obvious to all nations that what China is doing to the Uighurs is what they will do to all other nations who ever have the ill fortune to be controlled or conquered by Communist China. Every Indo-Pacific nation that wants to preserve its own culture, language and religion can see that their fate will be the same as the Uighurs if they are ever subjugated by China. This has given a great sense of urgency to implement a formal Indian-Japanese military pact and for all the nations in the Indo-Pacific region to work closely with the Indian-Japanese militaries for their own self preservation. The sixth link adds that in its crushing of the Uighur people, China is “treating Islam as a contagious ideological disease.” Hmm. Think of the message this sends to Islamic nations (like Pakistan) who have entered alliances with China. The Islamic nations throughout the Persian Gulf and Mideast cannot help but see China as a dire existential threat to their Islamic culture and existence as well.

These developments and alliances were, believe it or not, prophesied in the Bible millennia ago to occur in our time. Ezekiel 38-39 describe a great world war that will occur at the end of our age (called the “latter days” in Ezekiel 38:16). The prophecy mentions the latter-day destinies of many nations, but it references them by their ancient names. Once one correctly links the ancient names to corresponding modern nations, it shows that Ezekiel 38’s prophesied alliances are coming to pass with incredible and flawless accuracy. It foretold that Russia, China, Iran and their allies would be in an alliance that would eventually launch a “Pearl Harbor-like” attack at the very end of our age against an alliance of nations led by the “house of Israel.” The “house of Israel” cannot mean the Israelis as the Jews/Israelis are referenced as “Judah” in all biblical prophecies about them (Zephaniah 2, Zechariah 12 and 14, etc.). The “house of Israel” references the many modern nations descended from the migrating ten tribes of Israel who never returned to the Promised Land to live there and who were promised to become exceedingly numerous  in population after their exile in the 8th century BC (Hosea 1:10). The chief brother tribes of Ephraim and Manasseh were prophesied in another latter-day prophecy (Genesis 48-49) to become a “great nation and a company or nations” (or similar terminology in various translations of the Bible) with a common culture and destiny. They were to bear the name of Isaac upon them throughout history (Genesis 21:12), a prophetic marker repeated in Genesis 48:16. As those who have read my books realize, the modern American nation is called “Manasseh” in Genesis 48 and the British commonwealth of nations is called “Ephraim” in the same prophecy. These nations are called the Anglo-Saxon nations, and the term “Saxon” preserves Isaac’s name. Isaac’s name was rendered as the “Sacae” in Greek history and the “Saka”‘ in Persian history. The Romans later wrote these names as the “Saxons,” a name which is still upon Isaac’s descendants today. This means the the Americans and British nations constitute the ancient tribe of Joseph in modern history and the other tribes of Israel are found principally throughout Europe and Scandinavia. In other words, they are the NATO nations and their global allies. My books utilize the clues given in Genesis 49 about every tribe of Israel’s fate and characteristics in the latter days to help link their ancient names with their modern counterpart nations [these books are available at the homepage of my website]. Essentially, NATO and its allies are the Israelite alliance led by “the house of Israel” in Ezekiel 38. You may see abundant evidence that we are living in the “latter days” in my article, Are We Living in the Biblical Latter Days?, and you can see some of the primary reasons linking the USA to Manasseh’s destiny in my article, The United States of America in Biblical Prophecy.

Japan and India are also identified in Ezekiel 38 and are prophesied to be allies to each other and to the modern nations of the house of Israel. India and Japan can be likened to two “bookend” allies which will include an array of smaller nations located between them in the latter days. These nations will be many of the the Indo-Pacific nations mentioned in the links cited in this post, as this prophecy is being fulfilled before our eyes.

These latter day alliances and the outcome of the prophesied age-ending World War III are detailed in my 2005 article, What Ezekiel 38-39 Reveals about a Future World War III. It includes such subsections as “China and America Heading for a Conflict,” an outcome clearly being discussed in the modern media as China and the USA are on a collision course in trade, military and political dominance, etc. The Indian-Japanese alliance was also predicted in my 2005 article, based simply on Bible prophecy. A companion article, Japan’s Role in Biblical Prophecy, is also well worth your reading as it covers the same prophecies, but with a special focus on the nation of Japan.

If you read these articles, you will clearly understand that the nations of the world are implementing a “script” that was written for them millennia ago in biblical prophecies, and that these prophecies had to be inspired by a Creator God as only such a Being could inspire latter-day prophecies circa 2500 years ago and bring them to pass in our time. Because the world has largely ignored and rejected the Bible, the world is overwhelmingly blind to the fact that the Bible’s prophecies are coming to pass exactly as prophesied long ago. Whether the world accepts or rejects the Bible’s prophecies is entirely irrelevant as God is going to implement his prophecies whether anyone likes it or not. Indeed, God proclaims his ability to implement his ancient prophecies as key evidence of his reality and sovereignty (Isaiah 41:21-26, 42:9, 6:9-11). The Bible’s prophecies about modern nations will be fulfilled exactly as God foretold because God does exist to forcibly intervene in global geopolitics to make sure his prophecies are validated.

If you are reading this post, there is no reason that you should be ignorant of how the future will unfold. I urge you to read the articles referenced above, and see for yourself how accurate biblical prophecies really are!