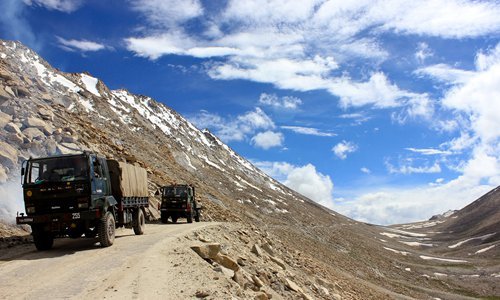 Far from the attention of the American public, a tense border confrontation between India and China could lead to a shooting war if some way is not found to defuse the situation via diplomacy. This confrontation is taking place in the high altitudes of the Himalayan region where China and India share a disputed border. This confrontation is in a remote region of the Himalayan Mountains where China and India also border a tiny mountain state called Bhutan. This situation is getting more tense as both China and India are reinforcing their troop strength in the region. Each side blames the other, but it seems the crisis began when China began building a road in the disputed area (exercising sovereignty rights). India rejects China’s sovereignty over the region and sent bulldozers to rip up the Chinese-built road (first link).

Since then, each nation’s military has been preparing for a conflict if one comes. China has beefed up its military forces in nearby Tibet while India has sent 3,000 soldiers (first link) and 100 tanks to the region (second link). Military buildups in a crisis situation can gain a momentum of their own that makes conflict almost inevitable unless something happens to deter a war. One factor arguing against a war starting up is the extreme remoteness and high altitude of the region. Sustaining a war effort in such harsh conditions would be difficult and costly for both sides. However, India may decide that if they do not challenge a territorial assertion by China now, it will only invite a greater territorial grab by China in the future.

There is a complicating aspect to this confrontation. As China and India prepare for a confrontation, a shooting confrontation has already broke out between India and Pakistan–China’s ally. The third link and fourth link detail the fighting that has broken out between these two nations in the disputed Kashmir region. There have been exchanges of automatic weapons fire as well as mortar and artillery fire exchanges that has cost some lives. Is it only a coincidence that while India and China are staring at each other across a potential battle zone that Pakistan (China’s ally) has been skirmishing with India’s military forces, or is this a coordinated action taken by Pakistan and China to simultaneously threaten India?

India has been acting more resolute than some experts expected in this situation. This confrontation has followed very large naval exercises in the Indian Ocean between the navies of India, the USA and Japan. Are China and Pakistan sending a warning to India to not align itself with these other nations? If that was the intent, I think it will backfire. If anything, it will emphasize the pressing need for India to have strong ties to these other powerful allies as India confronts two neighboring nuclear-armed nations in Pakistan and China.

This development gives more support to my longstanding assertion that a Creator God is working out a Divine plan for the global alliances in the prophesied “latter days” of our current age as prophesied in Ezekiel 38-39. Even if no war breaks out on the above fronts, these developments will drive Pakistan and China closer together in the Gog-Magog alliance and it will push India closer to the overall western alliance in which the USA and Japan are strong Asian allies. These are the alignments which I have long written can be found in the prophecy of Ezekiel 38-39. These two rival global alliances are discussed in great detail in my two articles on this subject: What Ezekiel 38-39 Reveal about a Future World War III and Japan’s Role in Biblical Prophecy. I have also long asserted that we are living in the biblically-prophesied “latter days,” a time of critical biblical significance as this period of time will be climaxed by the return of Jesus Christ to set up his rule over the nations for 1000 years (Revelation 19:11-20:4). Jesus Christ himself warned that this time before his coming would be characterized by “wars and rumors of wars” (Matthew 24:6). Wars and rumors of wars are becoming steadily more common. If you examine the information in my article, Are We Living in the Biblical Latter Days?, I believe you will have no doubt that we are, indeed, living in that biblically-prophesied time.

While many “rumors of war” on the world scene will not escalate into shooting wars, some will. I make no predictions which armed confrontations will erupt into hot wars, but I do want readers to be aware of these possible war-starting situations so you are not surprised if they do erupt into open warfare. If China and India do fight a conflict, it is likely to be self-limiting due to the harsh terrain on the Himalayan Mountains region, but even that is not certain. What I do think will happen if fighting breaks out in the Himalayan region is that the USA will prove its worth to India as an ally by providing India with real-time intelligence information about Chinese troop deployments from America’s spy satellites and also by a willingness to expedite shipments of weaponry that India may suddenly need. Russia will doubtlessly do the same for China, and this could lead the USA and Russia into an ever greater state of confrontation than already exists between these two nations–which also fulfills the prophecy of Ezekiel 38-39 (please also see my article, The USA in Bible Prophecy).