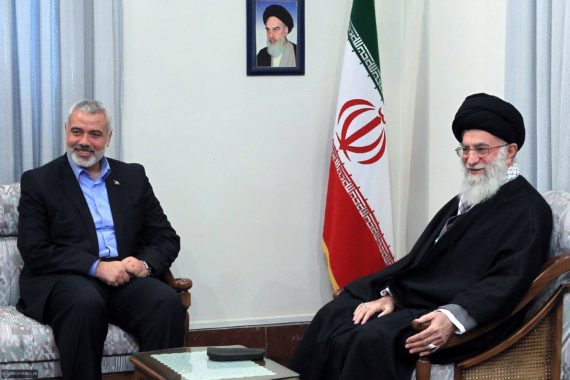 In an extraordinary event, the Saudi media has condemned Gaza-based Hamas. It charged Hamas with “establishing an Iranian Emirate in Gaza which is totally subordinated to the Ayatollahs” (first link and second link). These links detail this development, which bodes very ill for the Palestinians as this Saudi report indicates the Saudis believe Hamas has abandoned its fellow Sunnis to support the Shiite Iranians. These links cite a high-level, recent visit of Hamas’ dignitaries to Iran in which it appears both parties formed an alliance.

This indicates Hamas has allied itself to not only Iran but also to all of Iran’s proxies in the region (Syria, Hezbollah, Yemen’s Houthis, etc.). It would appear that “the Rubicon has been crossed” in relations between the Saudis and not only Hamas, but perhaps between the Saudis and the Palestinians in general. It was only recently that Fatah and Hamas signed an accord to work together again. Given the strong Saudi condemnation of Hamas, it would seem logical that this Saudi condemnation reaches to Fatah as well.

Given all the crises extant in the world at present, this development may be overlooked, but it is quite important. I doubt that this Saudi media report would have been allowed to be written (much less published) unless the Saudi rulers wanted to have this statement made public. This means that the Saudis are now joining the Israelis in condemning Hamas as an outlaw entity aligned with Iran. Iran and Hamas are both dedicated to destroying the Israeli nation. The Saudis used to support that viewpoint, but in recent years things have changed dramatically as Sunni Saudi Arabia now very much needs Israel as an ally vs. Shiite Iran.

Hamas is beginning to feel the Sunni world slipping away from it due to the Hamas-Iranian alliance. The third link reports a condemnation by Hamas of a call by a Government Minister of Sudan which called for a “normalization of relations” between Israel and Sunni Sudan (third link). In an act which truly surprised me, even a UN official condemned Hamas for its anti-Israeli stance (fourth link).

These developments are very consistent with the burgeoning alliance between Israel and the Sunni nations to oppose Iran and its allies and proxies in the Mideast. This is also very consistent with the biblical prophecy in Ezekiel 38-39 regarding the two global alliances that will exist in the “latter days” at the end of our age. The eastern alliance of Gog-Magog (Russia, China, Iran, etc.) is listed in Ezekiel 38:2-6. Not one modern nation descended from Abraham is listed as being a part of that Gog-Magog alliance, which argues that all the sons of Abraham will be gathered into the other global alliance at the end of our age. My books detail that the USA, the UK, many NATO nations, Australia and New Zealand constitute the “house of Israel” in the latter days–the descendants of the ancient ten tribes of Israel. This connection is easily evidenced in my books (available at this website’s homepage) and a brief review of the origins of the USA are given in my free article, The USA in Bible Prophecy. The Israelis/Jews constitute the Israelite tribe of Judah. All the Israelite tribes descended from Abraham via his wife, Sarah and their son, Isaac.

The modern Ishmaelites (the sons of Abraham via Hagar) are the Arab nations (Genesis 25:12-18). It is my view that the sons of Abraham via his wife, Keturah, (Genesis 25:1-4) are largely found in Eastern Europe and in parts of the Balkans. Even some of the the sons of Abraham via his unnamed concubines (Genesis 25:6) who were sent to an eastern region can likely be identified as the Brahmans of India [vowels did not appear in ancient languages so one must follow the consonants of words to trace nations through time. The consonants of “Abraham” are almost identical to “Brahman.” If you put the vowel “A” in front of the word “Brahman,” you get an even closer match with the word “(A)brahman.” India is located directly east of the ancient Holy Land from whence Abraham sent the sons of his concubines to the east.] Genesis 17:5 prophesied that Abraham would be the father of “many nations” so we must look for his descendants in many locations. Genesis 28:14 adds that his seed would scatter to all four directions on earth so the modern nations descended from Abraham must be located all across the earth.

Sharp readers will note that I omitted one branch of the children of Abraham in my above listing. The missing group is the Edomites, descended from Abraham via Sarah and Isaac-Rebekah. Esau (Edom) was the twin brother of Jacob who was later renamed “Israel” (Genesis 25:20-28, 35:10, 36:1). One of the primary names attached to Edom’s descendants was “Teman” (Genesis 36:11. 15 and 34). My writings have long identified the modern Edomites as constituting at minimum the Turks. The historic name of Turkey was the Ottoman Empire before it became Turkey after World War I. There is an easy match between the consonants of “Teman” and “Ottoman.” If all of Abraham’s seed are to be in the “western” alliance led by the ten tribes of Israel, then Turkey (Edom) should logically be in that alliance. Indeed, they have been allied to that alliance in NATO since World War II. However, under its current leader, Recep Erdogan, Turkey has been steadily forsaking its traditional allies in both NATO and in the Sunni Islamic world. Either Turkey will recover its position in NATO or it will continue its drift into an Islamist direction allied to Iran or in some direction all its own. Turkey’s future direction is currently clouded. However, the Ishmaelites (including the Sunni Arab nations in the Mideast) are increasingly adhering to the Israelis, the USA and their global allies, as these links confirm.

Some of the above identifications will be new to new readers of this blog. I strongly urge you to order either my 4-book set which documents the entire history of the ten tribes of Israel from ancient times into modern times, or my downloadable E-book,The Lost Ten Tribes of Israel…Found!. Both can be ordered online at my website’s homepage. If you do, you will see that the destinies of the modern nations of the world were foretold millennia ago by the prophecies of the Creator God.