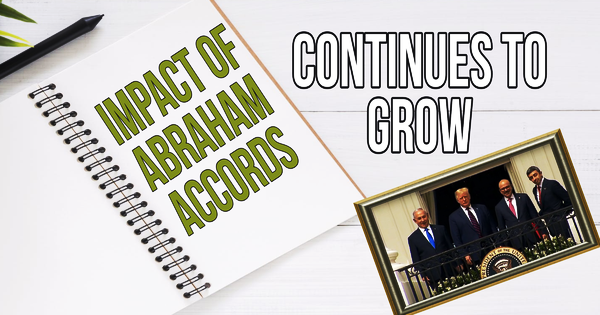 A previous post examined the “Abraham accords” wherein the Arab Sunni nations of the United Arab Emirates (UAE) and Bahrain normalized diplomatic relations with Israel and forged cooperative agreements in many areas. A new development has occurred which shows how widespread this cooperation is now becoming.

The first link reports that the Foreign ministers of the UAE and Israel met in Berlin, Germany to further cement the growing national ties and friendship between their two nations. Escorted by the Foreign Minister of Germany, the Foreign Ministers of the UAE and Israel together toured Germany’s Holocaust Memorial located in Berlin. This is really a striking historic moment! Having the Foreign minister of a major Arab nation join Israel’s Foreign minister in visiting the Holocaust memorial in Germany is something that would have been unimaginable just a few short years ago. The second link offers another perspective on this extraordinary event and observes it is the first time in history a representative of an Arab nation has visited a Jewish Holocaust Memorial. The Emirati Foreign Minister joined Israel’s Foreign Minister in leaving a written message at the Memorial saying they jointly declared the “Never Again” assertion that has become so universal in Holocaust remembrances.

The UAE is clearly spearheading a major realignment of the Arab nations in the Mideast to be in open cooperation with Israel. As my previous posts have discussed, the Sunni Arab nations and the Israelis truly need each other in their joint confrontation with Shiite (and Persian) Iran. That the new cooperation is being conducted under the framework of the “Abraham Accords” is a recognition by Arabs and Jews alike that they share a common ancestry originating with the patriarch, Abraham. The Arabs are descended from Abraham via Ishmael, Abraham’s son via Hagar, and the Jews are descended from Abraham via Abraham, Isaac, and Jacob (see my article, Four Reasons the Jews are Judah). In midwifing this important Arab-Israeli peace process into existence, President Trump has earned an honored place in history, regardless of what happens in the American presidential election next month.

Also, it must be realized that Judah is just one of the “twelve tribes of Israel.” Many assume that the so-called “lost tribes of Israel” died out or were forsaken by God after their exile. Nothing could be further from the truth! Even as their impending exile was being declared by God, God also affirmed the “birthright” blessings given to Abraham’s seed would remain on the house of Israel’s tribes. Hosea 1:10 records God’s promise that the post-exilic ten tribes would grow into an innumerable multitude, echoing the birthright promise given first to Abraham (Genesis 13:16, 17:1-7). Also, writing over a century after the ten tribes went into exile, Jeremiah 51:5 states clearly “Israel has not been forsaken, nor Judah of his God…” This is an important scripture as it shows the term “Israel” still applied to the ten tribes even during their post-exile history. It also makes it clear that God still regarded Israel and Judah as two separate entities going forward into history. My books document the entire history of the ten tribes of Israel, utilizing both biblical prophetic material and secular historical sources. These books may be obtained at my website’s home page. It is fitting that the president of the United States acted as the intermediary to bring the modern Ishmaelites and Jews together in a new Mideast peace process because the USA is actually the strongest modern nation of the modern “house of Israel” (see my article, The United States of America in Biblical Prophecy).

The third link is a video clip discussing meetings which also occurred between the Israeli Foreign minister and the President of Germany. Significantly, Germany has now recognized the entire Hezbollah structure as a terrorist organization, an outcome greatly desired by Israel. The link also mentions that rising anti-Semitism in Europe was also a topic in their meetings as well as Germany’s efforts to combat that trend. [I do think that a “sidebar” comment about Germany’s post-world War II record vis-à-vis the Jews and Israel should be stated. Germany’s governments ever since the end of World War II have all acknowledged Germany’s Nazi past and Germany has built a major Holocaust Memorial in Berlin as a reminder that such a Holocaust should “never again” happen. Germany should be given credit for doing so. Has Russia fully acknowledged Stalin’s mass crimes against humanity? Has China fully recognized the many millions killed by Chairman Mao? The answer to both these questions is “no.” Germany has fully recognized its Nazi past and repudiated it. Germany has become an ally of Israel and Germany is the builder of Israel’s state-of-the-art submarine fleet. In my opinion, Germany does not receive enough credit for its honorable record since World War II in openly acknowledging its role in World War II and making efforts to make sure it does not happen again. Such national honesty is rare in the history of nations.]

We should expect more historic developments as the “Abraham Accords” continue to widen and unfold. Bahrain also established diplomatic relations with Israel as part of the Abraham accords. It was not represented at the Berlin meeting, but Bahrain has taken an action that deserves recognition. The fourth link describes the background of one of the personal advisors to the King of Bahrain. This personal advisor to Bahrain’s king is a Jewish rabbi! The fourth link’s content was written in the period of time before the Abraham Accords were formally announced. However, the fact that an Arab Foreign minister joined the Israeli Foreign Minister at a Holocaust memorial in Berlin, and that a Jewish rabbi can be a personal advisor to an Arab king shows how rapidly things are changing in the Mideast!

One does wonder how many more advances will be made diplomatically, militarily, etc, in the future regarding, the Abraham Accords. Biblical prophecy may have a clue. Various prophecies in both the Old and New Testaments indicate that a new Jewish Temple will be built in the Temple Mount region of the city of Jerusalem in the latter days of our age. Whenever such a Temple does get approved and dedicated, we will have reached a major prophetic milestone indicating that the latter day’s sequence of events has reached its end stages. Saudi Arabia has not yet openly joined the Abraham accords, but it has indirectly signaled its approval by allowing Israeli airplanes to fly through Saudi airspace to land at airports in the UAE and Bahrain. Might it be that when the Saudis join these Accords that Saudi personnel will assume control of the Islamic Holy Sites on the Temple Mount? That may become a quid pro quo for allowing the Israelis to begin building a new Temple on the Temple Mount. if such a development occurs in the future, we will be close to the fulfillment of many biblical prophecies.