I AM STILL ALIVE; A RUMOR IS CIRCULATING THAT I AM DECEASED 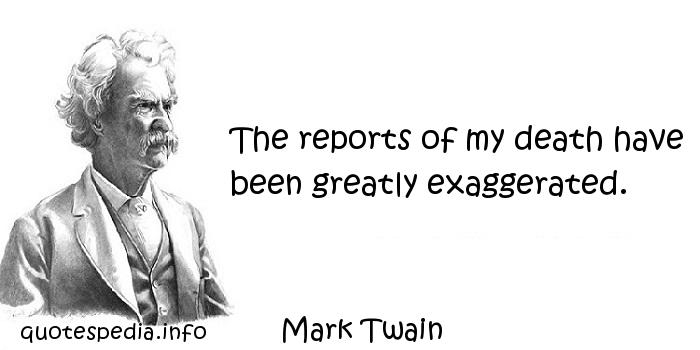 I was in the process of writing a post on a different topic when something happened which led me to delay that post and write this one as soon as possible. I think readers will understand the necessity of my doing so.

This afternoon, I received a phone call from someone in a far Western state within the USA. He was relieved to hear my voice on the phone as he had just been informed by someone in a large Zoom meeting that I was dead. I’m not sure of the name or nature of the Zoom group, but I was told there were about two dozen people attending the session who heard someone inform the group I was deceased. I heard everything second-hand of course, but I heard the report from someone who was participating in that particular Zoom group meeting, so I deem the report reliable. I was told that my books came up in the group discussion and one participant (identified as either an ex-member or ex-elder in the Worldwide Church of God) announced to the group that I was dead. The person who called me did the right thing to inform me of this rumor that was being spread so I could combat it before it spreads even further. I was told the name of the person who was spreading the rumor that I was dead, but I’ll not mention his name to spare him the embarrassment of being identified as a spreader of false rumors. The name that I was given for the false informant was known to me as once being an ordained elder and/or an administrator/faculty of the Worldwide Church of God. I don’t recall ever meeting this person in the past. The person who called me to see if the rumor of my demise did the right thing: He “went to the source” to get accurate information before spreading an unfounded rumor to others.

There have never been any communications that I can recall between me and the person who spread the rumor, so I have no idea where he heard that rumor or where it started. However, since news can travel very fast on the Internet and there were about two dozen participants in the discussed Zoom meeting, I thought it was best to make sure the truth was announced immediately and known at my website. I realize how rumors and news can spread very quickly if participants in a large Zoom meeting pass on a rumor to other circles of friends on digital websites and social media platforms. I myself belong to an international Zoom group wherein I interact regularly with others in the group. Participants in this group are from four nations–the USA, two European nations and one African nation as well as several American states. Any kind of news we share could easily be spread quickly to many others around the world, so the same thing could occur with the participants in the Zoom meeting who were told by a person in the group that I was dead.

My thanks to the person who called me to inform me this rumor was being spread in a large digital meeting forum. He did exactly the right thing by “proving all things” before spreading it any further. The person who spread this false rumor/report did the wrong thing by spreading news that was not true. Proverbs 26:20-22 warns against being a talebearer as much damage can be done by lies and false rumors. Obviously, I have no idea who started this rumor about my passing, how far this false report has spread or how long it has been spreading.

In conclusion, I can report that I am very much alive, and if any one reading this post has heard otherwise from anyone, please let them know rumors of my demise are false and feel free to send them a copy of this post from me on the matter to help spread the truth!

The next post I place will, hopefully, be back to my usual topics about current events in the context of biblical prophecies and scriptures.

Thanks for helping me combat this false rumor if you encounter it anywhere or in any forum!