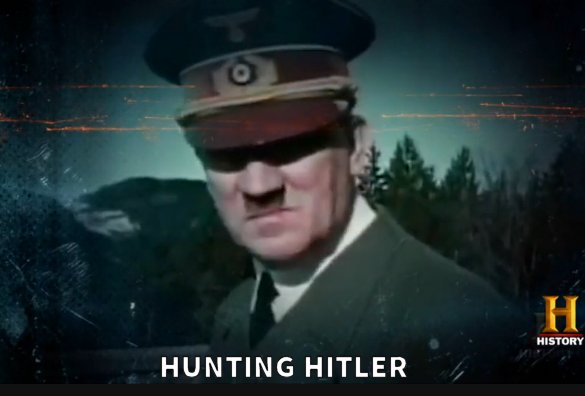 The promotional ads indicate that the series will make the case that Adolf Hitler escaped Berlin at the end of World War II and hid out in Argentina until the end of his life. A brief map of Europe in a promo in a link also indicates that the series will conclude that Hitler escaped Europe via Spain, and the links give us brief previews of information that he traveled to Argentina via the Canary Islands on a long-range German U-boat. The third link gives a brief synopsis of the material that will be covered in each of the documentary’s episodes. There will be eight programs in the series so this allows for some exhaustive examination of the evidence.

When I saw the promos for the series, I immediately thought of the 2011 book, Grey Wolf, by Simon Dunstan and Gerrard Williams. I wrote a book review of that book on my blog in a post dated November 27, 2012. In that review, I examined the conclusions of that book that Adolf Hitler, Martin Bormann, Eva Braun and other Nazis escaped to a very remote town in Argentina that was secretly built by the German hierarchy during the last two years of the war because they knew the war was lost and they would need a secret hideaway. My book review is included as the last link (which I urge readers to examine). The book also concludes that Hitler escaped Berlin via a Spanish plane furnished by Spain’s Fascist dictator, Francisco Franco, who had been helped by Hitler and the Nazis during the Spanish Civil War. It also concludes that long-range German U-boats were used to transport the top Nazis and valuable cargo to Argentina. The History Channel’s documentary series sounds so similar to the book, Grey Wolf, that I wonder if it was based on that book’s research.

I hope the series includes the excellent historical documentation that is contained in the book, Grey Wolf, and how the Americans helped facilitate the escapes of Hitler, Bormann and other top Nazis in exchange for exceedingly valuable information and key Nazi personnel at the end of the war. According to the book, the American government allowed Hitler to get away in exchange for the Nazis arranging for the top Nazi cruise missile and ballistic missile scientists (who invented the V-1 and V-2 rockets) to be given into American custody/protection at the end of the war, access to locations where stolen art from all over Europe was cached by Nazis, etc. Indeed, Werner Von Braun and his team of Nazi missile experts were transported to America via Operation Paper Clip and they were quickly granted immunity for any crimes committed in World War II and resurfaced as leaders in NASA, the American missile and space programs. The movie, Monuments Men, was based on the American awareness of the location of the secret sites where artwork stolen by the Nazis was hidden. The movie is about the efforts of the American army to gain custody of as much of the stolen artwork as possible before the Russians found those sites. The book has much fascinating information from declassified documents that top Nazis and top American governmental leaders met personally in neutral Switzerland to arrange the above deals, and it also reveals how international bankers on rival sides interacted in person during the war as well. If you have not read this book, I strongly urge you to do so.

I’m going to watch the History Channel series, and, if it is anything like the book, Grey Wolf, it should be very interesting. The book concludes that Adolf Hitler died in a secret location in Argentina in 1962. We’ll see if the History Channel’s documentary series agrees.