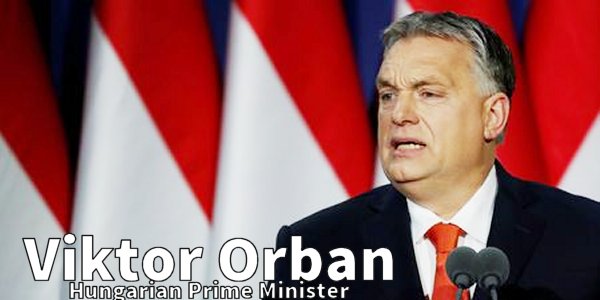 Hungary’s Prime Minister Viktor Orban has declared that “Christianity is Europe’s last hope” as he continues to vigorously oppose the EU and the leaders of Western Europe who have forsaken Christianity and adopted a secular, humanist perspective on governance and just about everything else (first link). Orban added in a speech: “the West falls as it fails to see Europe being overrun.” Orban is a determined foe of left-wing billionaire George Soros and has championed efforts within Hungary to defeat any globalist agendas of Mr. Soros (the first link mentions this).

Mr. Orban is up for re-election in April and polls indicate that he will win it easily. Mr. Orban also called for a “global alliance against migration” as he calls for “ethnic homogeneity” instead of multiculturalism. The first link also reports that Mr. Orban warns that Europe faces dangers from the leaders of the EU, France and Germany. The second link and third link offer additional perspectives on this story, but they do not offer as many details as are contained in the first link.

I believe Mr. Orban’s remarks will be applauded throughout Eastern Europe. A recent post noted that Eastern Europe has formed not only the Visegrad Four (Poland, Hungary, The Czech Republic and Slovakia) but The Three Seas Initiative Group (which includes almost all of Eastern Europe’s nations). Neither group wants to follow where the EU is leading. It is not difficult to see that tremendous stresses and deep antagonisms are growing stronger within the EU. Many nations are seeing the EU’s diktats as an existential threat to their culture. Christianity was a major force in preserving the distinctive cultures of the Eastern European nations during the dark decades of Nazi and Soviet repression. The Eastern European nations are in no mood to forsake Christianity after it preserved the cohesion of their national cultures during so many dark decades of affliction. They are also in no mood to abandon their sovereign national independence for which they waited so long. In watching the slow but steady splintering of the EU, I am reminded increasingly of the wisdom of Amos 3:3 : “Can two walk together except they be agreed?” The nations of Europe are definitely not walking in agreement with each other. They cannot long stay together. The seemingly inevitable splits within the EU will be a major step in the prophesied collapse of the current globalist world system called “Babylon the Great” in Revelation 17-18. Please see my article Is Babylon the Great about to Fall…Ushering in a New Beast System?, for an in-depth application of that biblical prophecy to our modern times and geopolitics.

It is worth noting that Hungary’s Viktor Orban is right when he asserts that “Christianity is Europe’s last hope.” Indeed, Christianity is everyone’s “last hope” whether they realize it or not.

My thanks to a reader for drawing my attention to this story.