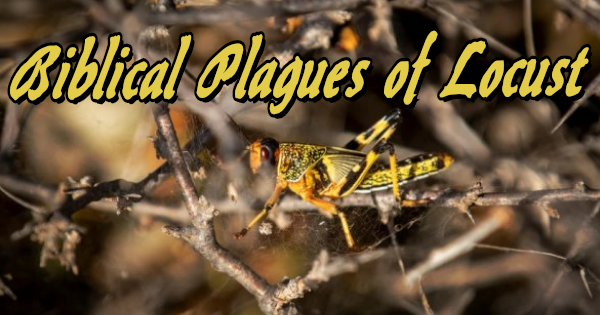 While the growing coronavirus pandemic currently receives, justifiably, the dominant portion of the world’s news coverage, there is another plague that is threatening many nations and which is close to getting out of control. Nations in East Africa have been experiencing the worst locust plagues in, depending on the nation, 25-70 years. The entire food crops of many nations are being consumed or at risk, so food shortages and actual famines loom as well.

The first link states the locust swarms were blown from the Arabian Peninsula into East African nations, and that the damage they are doing to food crops will cause a “severe hunger crisis” affecting over ten million people in a variety of nations. Somalia is especially hard hit and has declared a state of emergency. It mentions that South Sudan, Djibouti, and Uganda are also at risk as these locust swarms multiply and spread outward. One source indicates the number of locusts could multiply by June into a horde 500 times larger than they already are! Think of the food crisis that will be caused if it gets that bad! The locusts eat food crops that feed humans, livestock and wild African animals alike, so all living things will be at risk in the affected nations.

Besides Somalia, the second link reports Ethiopia and Kenya are being hit by the worst locust plagues in 70 years. It is so bad that a field of a single square kilometer can have 150,000,000 locusts in it. It cites one monstrous locust swarm in Kenya that is so huge it measures 60 kilometers by 40 kilometers in size! The UN is attempting to help as these nations are being overwhelmed because they lack the resources to combat such a plague. Making matters worse is that terrorism and local warfare in the region hinders an effective response. The third link states that some swarms of locusts are so dense that they can consume a field of crops in just 30 seconds, and it cites the language of Matthew 24:6 to compare this to prophesied “biblical” plagues.

The fourth link adds that a swarm of locusts can travel 100 miles in a day so this plague can spread very rapidly. It has a map showing locations of many locust swarms, but these swarms have  undoubtedly spread further since this map was prepared. It shows that besides the nations named above, Eritrea, Sudan, Uganda and Tanzania are also either being affected already or are at risk from the locust swarms. It is obvious that tens of millions of peoples’ food crops are at risk of being wiped out.The fifth link relates that the first swarm apparently originated in Yemen, which has been torn apart by civil war for years and was already on the verge of famine before the locust plague began.

This crisis is already expanding beyond East Africa. Pakistan has also declared a state of emergency due to locust plagues (sixth link). It is not clear if the Pakistani locust swarms also originated in the Arabian Peninsula or whether they originated independently of the East African swarms. Since locusts are already in Pakistan, they could also spread to India’s croplands and possibly even further into Asia. It does seem that the world is largely ignoring the severe locust plagues due to the coronavirus outbreak in China which is now spreading to many other nations. It is not just Africa and Asia which are at risk of experiencing destructive locust plagues.  The seventh link reveals that a huge locust outbreak afflicted the large Italian island of Sardinia last summer, so Europe is also at risk of locust swarms reappearing in the Spring.

On a personal note, I know locust plagues can also affect North America. My deceased mother grew up in rural South Dakota but she told us about locust plagues that affected the American Midwest during her childhood, which included the “Dirty 30s” and the Great Depression. She said one year a large locust swarm attacked their farm just before the crops were to be harvested. The crops were lost, and the locusts also began consuming their large garden crops. Their family rushed out into the cloud of locusts and picked as many above-ground vegetables (tomatoes, cucumbers, peppers, squash, etc.) as they could to bring them indoors away from the locusts so the family would have some such vegetables to eat in the coming winter. After the locust swarm moved on, they went back to the garden and harvested the below-ground tubers and root crops (potatoes, onions, beets, carrots, etc.) which the locusts did not consume. Farmers were typically much more independent then and had large “root cellars” so they could eat garden-grown vegetables long into the winter. Since they also had cattle, sheep, and chickens, they still had meat, milk, cheese, and eggs to help them get through the winter. If you are a gardener and want to protect your crops from a locust risk, be sure to plant some tubers and root crops.

If the locust plague is not stopped, it could spread and worsen as the Northern Hemisphere experiences Spring months. Remember some of the links cited in this post state that the locusts could multiply their numbers 500 times in the next few months. Think how far-spread they could get with numbers that gigantic. It is possible that the world could soon be experiencing two simultaneous global plagues: the coronavirus and locust plagues.

Matthew 24:6-7 prophesies that “famines and pestilences” will characterize the time just prior to the return of Jesus Christ. Revelation 6:1-8 prophesies that the “Four Horsemen of the Apocalypse” will include food shortages and food rationing as well as pestilences/diseases. Maybe the metaphorical “Four Horsemen” are beginning to saddle up their horses for their grim ride.  We will have to wait and see if the current coronavirus and locust plagues continue to spread globally and fulfill these biblical latter-day prophecies.

There is no question that we are living in the latter days prophesied to come to pass in many locations in the Bible. Specific prophecies that will are unique to the latter days are being (or have already been) fulfilled. For an examination of how many biblical prophecies are concurrently coming to pass in our modern world, please read my article, Are We Living in the Biblical Latter Days? For a reasoned approach concerning how to prepare for the challenging times that lie ahead of us, please also read my article, Should Christians Prepare for Future Hard Times?