HOW MUCH DAMAGE HAS UKRAINE DONE TO THE RUSSIAN MILITARY? 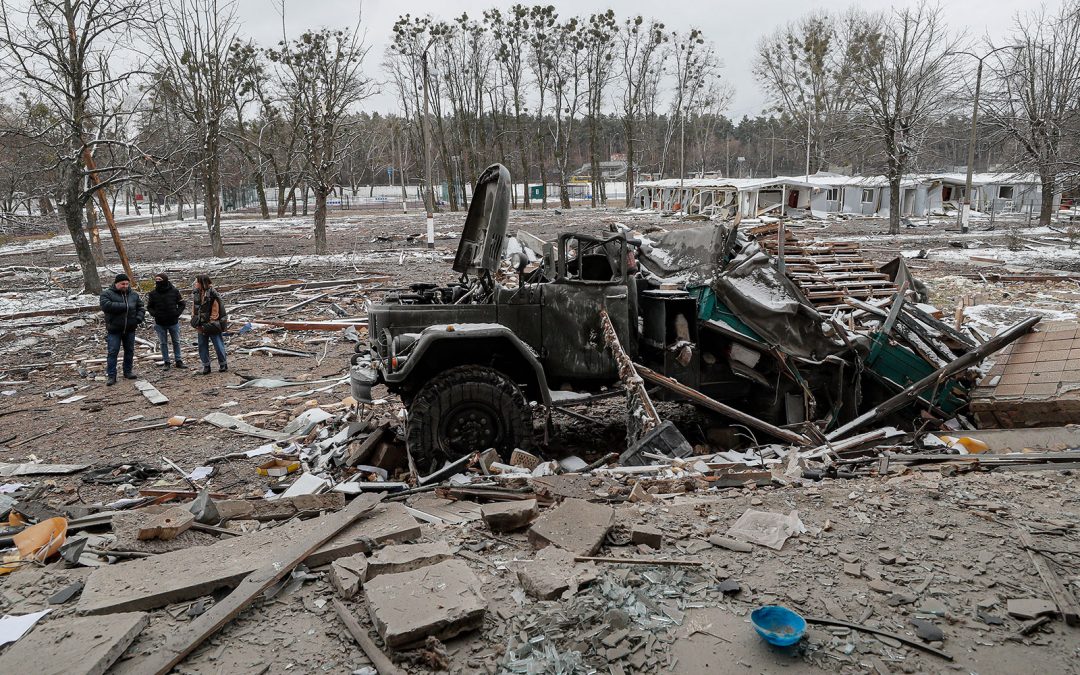 It has been said that “the first casualty in war is the truth.” Russia’s war launched against Ukraine is no exception to that rule. In all wars, each side tries to control the narrative about casualties, tactics, force deployments, etc. In the Russian-Ukrainian war, the estimates of casualties and equipment losses vary widely; however, let us examine some informational sources to try to gain at least a realistic insight into the true costs of this war. The Ukrainian costs are mostly obvious: they have had sections of large cities leveled. Perhaps 3.5 million Ukrainians have fled to neighboring NATO nations for protection, and some Ukrainian territory has been occupied by Russian invaders. On the other hand, Russia has been very tight-lipped about its losses and rarely updates its casualty figures. This post will cite what I think are the most reliable data, and offer one piece of evidence that gives those figures some real-world support.

Russia expected an easy occupation of Ukraine to occur. They thought the Ukrainians would “fold” within a few days. The Russian intelligence and expectations couldn’t have been more wrong. Ukraine was more ready for an invasion that anyone thought. Also, Ukraine’s President Zelenskyy put steel into the hearts of the Ukrainian fighters when, offered a ride to flee his nation, he publicly stated “I need ammunition, not a ride.” His grit and determination has to be contrasted with the actions of the last President of Afghanistan. As the Taliban invaded when Biden forced the US military to run like scared rabbits, the President of Afghanistan quickly abandoned his military forces and his nation, taking a pile of looted money to support a lavish lifestyle wherever he relocated. I think Western nations expected Zelenskyy to do the same thing; however, they quickly learned Zelenskyy has real courage which gave all Ukrainian fighters new determination in their fight vs. Russia.

With that introduction, what kind of damage have the Ukrainian fighters inflicted on the Russian invaders? As more evidence emerges, the damage is apparently on the high side of all estimates. The first link states an estimate of Russia losing 7,000-15,000 soldiers killed. A later estimate released by a NATO spokesman now says that 30,000-40,000 Russian soldiers have been killed or wounded. The second link cites Ukrainian claims that their forces have killed 12,000 Russian soldiers as well as destroying 49 warplanes, 81 helicopters, 335 tanks, 1105 other armored vehicles, 123 artillery systems, etc. Notice those totals were valid as of March 10th. Russia has lost many more soldiers and war material since those totals were released two weeks ago. Russia has been generally silent regarding its losses, which infers that they are too high to acknowledge. The second link cites an early NATO estimate of Russian losses which has been updated a lot since then. Ukraine has also claimed the killing of six Russian generals. Given the rigid command structure of Russian forces, the loss of so many generals decapitates key tactical control and commands functions within the Russian army.

The third link reports that the Russian invasion has stalled and that Ukrainian counterattacks are actually re-taking some cities and key territories. The fourth link reveals that a pro-Putin Russian media source accidentally affirmed the Ukrainian estimates of Russian battle deaths. This Russian media source reported that Russia had suffered 10,000 battle deaths, but that report was quickly “scrubbed” from public access by Russian censors. This does indicate that Russia knows how many soldiers it is losing, but is trying to hide that total from the Russian population. At this point, nothing released by Russian official sources can be taken seriously. The fourth link also gives updated Russian loss totals of 96 warplanes and 118 helicopters. The fifth link confirms Ukrainian claims that they destroyed and sunk a Russian navy ship at a captured Ukrainian port. Later claims have indicated that two other Russian warships were also damaged. That the Ukrainian forces could totally destroy a large Russian naval ship makes it evident that the Ukrainians still have heavy weapons that they are holding in reserve until they have large Russian targets to hit. The Russian ship destroyed was a military cargo ship bringing war supplies to the Russian army. Its destruction means Russia’s logistical problems just got even worse.

The sixth link reports that as Russian military forces have been stymied, Russia has turned to wanton attacks against many civilian targets, as I’m sure you have all seen on TV news segments. That Russia has turned to attacking civilian targets also confirms Ukrainian reports that the Russian military has failed to reach its objectives. After a month of warfare, Russia’s vaunted military has suffered incredible losses. If the Ukrainian estimates of Russia’s losses are close to accurate, Russia’s army is getting chewed up in Ukraine and it cannot sustain this level of losses for much longer. It also reports that Russia may have already lost 20% of its entire invading forces and war material in just one month of fighting. The seventh link is from the establishment media source, The Wall Street Journal. Unless you are a subscriber, you may only see (as I did) the first few paragraphs of the article, but those few paragraphs shows the WSJ citing NATO’s estimate that up to 40,000 Russian soldiers have already been killed or wounded. Numerous media sources have reported major deficiencies in the Russian military. Foremost among them is wild hubris–underestimating the strength of the Ukrainian forces and their resolve to fight back. Other deficiencies in the Russian military have been reported as severe logistical failures, low troop morale, fuel shortages, poor training of both officers and enlisted men, etc. One factor also needs to be considered. In spite of Russia having a huge army and large numbers of tanks, warplanes, etc., Russia was cited in many media outlets as asking China for military assistance in Russia’s war vs. Ukraine. That a superpower like Russia has to ask for outside help in a war vs. a much smaller nation like Ukraine after just one month is a very graphic admission by Russia that its military is suffering immense losses in Ukraine.

There have been concerns that after Russia conquered Ukraine, that Russia wold next invade the Baltic Republics as part of an effort by Putin to recreate the old USSR.The eighth link offers an analysis of this threat and NATO’s moves to counter that threat. It also cites the very close alliance between Russia and China that now exists. It is my belief that the severe losses Russia is incurring in its Ukrainian invasion steadily lessen the threat of a Russian attack on NATO’s eastern flank. Not only is Russia losing significant numbers of war material, Russia has learned that its main battle tanks, armored vehicles and attack helicopters are no match for relatively cheap NATO armaments such as the USA’s Javelin anti-tank missile and the Stinger anti-aircraft missile–both of which can be carried by infantry soldiers. The United Kingdom and Sweden have also sent thousands of effective anti-armor weapons to the Ukrainian army, and these weapons are even lighter than the USA’s Javelin anti-tank weapon. Russia is no doubt shocked to learn that its tanks and armored forces are now obsolete or at least obsolescent. NATO forces now can have great confidence that its anti-tank weapons can destroy any invading Russian tanks.

In my posts over the last few years, I periodically noted that Russia and China needed a large regional war to test its military personnel and its weaponry to see how it compared to NATO/Western military equipment in real combat conditions. This has now happened. Russia expected its military forces would easily roll over the Ukrainian military. Instead, the Ukrainian forces have ably demonstrated that Russia’s military is far weaker than anyone realized. Its soldiers are unmotivated, poorly-trained and led, and its military equipment cannot survive encounters with NATO/Western anti-tank, anti-armor and anti-aircraft weaponry. Russia now knows that if it tries to invade NATO nations, Russian losses will be truly breath-taking. China has also watched closely what is happening in Ukraine. If Russian weaponry had defeated the Western weaponry supplied to the Ukrainians, China would have been likely to invade Taiwan based on that outcome. However, now that Russian weaponry has been proven to be weak compared to Western weaponry, China has been given pause to consider any invasion of Taiwan. China could rightly assume that Taiwan may be armed (or soon will be armed) with the same Western weaponry that has taken a terrible toll on Russia’s weaponry.

I believe that the major failure of Russia’s military in its Ukrainian invasion has clear connections to biblical prophetic timetables. If Russia’s invasion had been easily successful, it would have raised the likelihood of a new World War III beginning with a Russian-Chinese-Iranian invasion of NATO and fellow democracies and capitalist nations around the world. As long-time readers of my blog know, I’ve long thought that several other major biblically-prophesied events must occur before the global war prophesied in Ezekiel 38-39 takes place. My current understanding of biblical prophetic timetables is that several major prophecies must be fulfilled before the the final world war of our age prophesied in Ezekiel 38-39 occurs. These events are (A) the fall of the current global financial/political order called Babylon the Great in Revelation 17-18, (B) the establishment of a new global financial/political order called the “beast” in Revelation 13, 17 and 18 and (C) the arrival of the Divinely-empowered Two Witnesses of Revelation 11. None of these events have occurred yet, but the current political/financial system is looking steadily more shaky as its stability is being weakened by many factors. I wrote a previous post examining how all these prophesied events connect to the timing of the prophecy in Ezekiel 38-39 and it is included as the ninth link. I remain flexible in my approach to biblical prophecy, and I’ll “turn on a dime” if God changes the course of world events to indicate matters are heading in a different direction. Since I am not affiliated with or supported by any organization, I can change positions quickly if necessary. I don’t need any permission from a doctrinal committee or church board to quickly take a new perspective if events dictate such changed perspectives are necessary. While I’m watching world events very closely, I currently still think the order of prophetic fulfillments will unfold as outlined in my post in the ninth link.

The more military equipment Russia loses and the more its army gets chewed up in its senseless war vs. Ukraine, the less likely are the chances that the prophesied attack in Ezekiel 38-39 will occur soon. Russia’s army and war material are clearly “not ready for prime time,” and it must make major changes and improvements to its military before it has any chance against a Western/NATO army bristling with the weaponry the Ukrainians are using to inflict terrible losses on Russia’s army and air force.