HOW MANY PEOPLE IN CHINA REALLY DIED OF THE CORONAVIRUS? 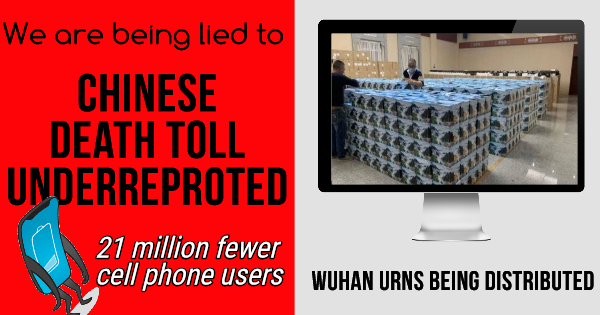 As the COVID-19 infection and death totals rise all over the world, there is one nation which reports a virtually microscopic infection and death rate compared to other nations. That nation is China. Does it make sense to you that China (the original location of the coronavirus infection and in which the authorities allowed it to spread like wildfire during the Chinese New Year’s travel season and during which the Chinese authorities denied the disease even existed and punished doctors who tried to warn the nation and world about the imminent pandemic) should have some of the lowest per capita rates of infection and death among the nations of the world? That result defies all credulity, and it is becoming increasingly commonplace in global media and political circles to see credible reports that China’s real rate of infection and death is exponentially higher than China has officially reported. This post will pull together some of these reports and show just how bad the situation really has been in China. Let us begin by noting that China reports, as of this writing, only 3,309 fatalities from the coronavirus according to the official totals released by the ruling Communist Party of China.

The first link reveals that the statistics from just seven funeral homes in one city indicate the death totals in China are vastly higher than reported by official sources. It reports that just seven funeral homes have distributed to relatives approximately 42,000 burial urns with the cremated remains of coronavirus fatalities. How many funeral homes are there in China which have been cremating the bodies of the dead victims? Just these seven funeral homes reported distributing 3500 burial urns to relatives each day for seven days. Do the math. It exposes the lies of the Communist government of China. This new deadly virus spread all over China during the Chinese New Year season when Chinese people customarily travel to visit relatives or travel all over the world. Wuhan, the location where the virus began, is a city of millions of people. The virus had every opportunity to spread from Wuhan all over China and the world via air and ground travel for weeks before the Chinese government woke up and began trying to fight this virus. The locations throughout China to which the virus could have spread in its first few weeks of community spread are almost limitless. Yet China would have us believe that only 3,309 people died from it when just seven funeral homes reported circa 42,000 dead just for starters? How many more burial urns do they have to distribute? How many burial urns are being distributed from funeral homes all over the nation of China? Obviously, the real number of infections and deaths could be staggeringly high. The second link offers a menu of many more media reports about how the funeral home burial urn totals in China reveal the grossly understated official totals from China.

The third link offers a clever mode of analysis in concluding that the death toll in China from this virus may be unimaginably higher than reported. It focuses on the fact that Chinese citizens are required to have cellphones and register them, and that people in China “can’t survive without a cell phone” and that it is “impossible to cancel his [or her] cellphone.” It reports that although China’s population data showed there were “4.67 million” more people at the end of 2019 than the end of 2018, the number of registered cell-phones by just three Chinese telecom companies reported a combined drop of approximately 15 million phone accounts in January and February of 2020…when the COVID-19 disease was raging out of control in China. The article asks the obvious question of “whether the dramatic drop in cellphone accounts reflects the account closings of those who have died due to the CCP virus.” The third link is from The Epoch Times, which refers to this virus as the Chinese Communist Party (CCP) virus because the CCP allowed this virus to spread all over the world due to its initial unwillingness to admit or combat the virus. Did the real death total in China reach into the millions? China’s cellphone account data, argues, that it did. Clearly, the official total of 3,309 has no credibility at all. The fourth link reports more reasons why the Chinese official statistics make no sense and concludes it “would be the height of folly to trust the Chinese on anything.” It also adds that the Czech Republic and Spain discovered that rapid virus test kits purchased from China had a failure rate of “70 to 80 percent of the time.” The article adds that China admits it did not count asymptomatic infected people in the official totals for some time.

How do China’s official statistics look when compared to the rest of the world’s totals? Look at the data in the fifth link, which lists official infected and death totals in many nations via several comparative methods. China’s official totals are far lower than other nations even though the virus began in China and spread all over China before the government began to try and stop it. Given that China’s 1.4 billion people were virtually all exposed to the coronavirus, how can China’s infected and death totals be microscopic compared to European nations? The Western nations caught the virus from air travel between their nations and China. The chart gives the following death rates per million population: Spain-300, Italy-283, France-158, the USA-38, and Germany-24. How many has China reported? Just 2! China, the nation in which the coronavirus raged for months, reports just two death per million of population. If you believe that total, there are many scam artists who would love to sell you some ocean-side land in Nebraska! The USA has an unusually low rate of infections and death compared to many EU nations and this is likely due to President Trump shutting down air travel between the USA and China early in the pandemic and doing the same with EU nations when it began spreading widely in the EU. Germany has a low rate as well, but the real star among the nations in stopping the coronavirus in its tracks is Taiwan. Scan down the list of nations to see how low their rate is–even though they are located next door to China–the epicenter of the pandemic

Another indication of how badly China needed healthcare items to treat the pandemic inside China is found in the sixth link which reports China imported 2.5 billion healthcare items in a little over a month during January and February 2020 when the pandemic was ravaging China. China effectively depleted the world’s supply of reserve health care supplies to treat the pandemic within China–leaving other nations very short of necessary protective gear. This fact argues that China’s official totals are utterly ridiculous. That level of imports supports the conclusion that China’s actual infection/death rates may have run into the millions. Combining the information in the sixth link with that contained in the seventh link and eighth link reveals a very dark side of China’s actions. China has been charging high prices for faulty medical equipment it now is selling to the world’s nations as they now try to treat this Chinese-originated coronavirus. China is effectively selling its discards to the world. China is earning a great deal of ill will among the nations of the world for its actions throughout each stage of this pandemic.

So how many Chinese people were actually infected by the coronavirus and how many died from it? No one knows for sure, but what is clear is that it is exponentially higher than China’s official totals. China’s Communist government uses lying as just one tool in its disinformation campaigns, but in this instance, it has been caught trying to tell a lie so big everyone can see it for what it is. It didn’t even try to tell a credible lie. If it had released totals ten times higher than reported, they still would have been received with skepticism. As it is, China has told a “whopper,” and the world sees it.

As readers of my articles realize, China will be an ally with Russia and Iran in a great World War III at the very end of our “latter-day” age, as prophesied in Ezekiel 38-39 of the Holy Bible. You may see much more information supporting these assertions in my articles, Are We Living in the Biblical Latter Days? and What Ezekiel 38-39 Reveal about a Future World War III. I’d like to conclude this post with a question that has no answer. Given that the coronavirus spread wildly through China unimpeded by the Communist government for weeks and that Chinese military forces were used to help stop the plague once China realized what a threat to their nation it really was, how many insufficiently protected Chinese military personnel were infected by the disease and how many succumbed to it? The answer is likely a very high total which China desperately wants to hide. The number of Chinese military personnel who died from this coronavirus has an impact on how soon the final global war prophesied in Ezekiel 38-39 will occur. How many top Chinese officers died? How many top Chinese scientists died? No one knows. The higher the number of Chinese military casualties there really are, the more it argues that the war prophesied in Ezekiel 38-39 will be delayed for a longer time than it ordinarily would have been.