HOW A BIDEN PRESIDENCY COULD AFFECT THE “ABRAHAM ACCORDS” 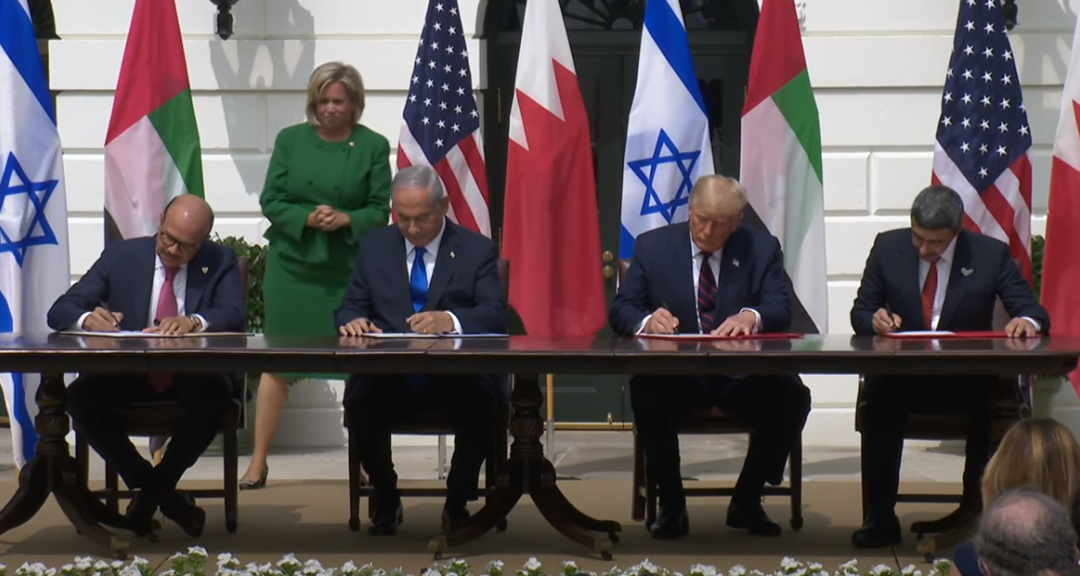 Major progress is being made on turning the “Abraham Accords” midwifed by President Trump into a much wider agreement between the Sunni Arabs and the Israelis. After giving readers a glimpse into remarkable developments that are happening far from the attention of the major media, we will look at how this process could be changed by a Biden presidency. First let’s look at the good news.

The first link has a wealth of exciting information in it. It describes a private meeting that occurred between Israeli Prime Minister, Benjamin Netanyahu, and the Saudi Crown Prince, Mohammed Bin Salman. While there was an official denial of the meeting from some Saudi sources (they need to do this because the Saudis do not yet openly have diplomatic relations with Israel), some huge developments are about to take place in the Mideast. The Saudis intend to built a mega-city along the Gulf of Aqaba/Red Sea in the far northwestern part of their nation.  It is expected that this “mega-project” will cost one-half trillion dollars and that the city will grow to be as big as the nation of Belgium. It will include a “giant bridge” linking Saudi Arabia to Egyptian territory in the Sinai Peninsula. This bridge will have to be really high and huge to allow ocean-going merchant ships and warships to pass under it en route to and from the Jordanian port of Aqaba and the Israeli port of Eilat. If you look on a globe or map, you will see how strategic this sea-port city and bridge will be. Currently, many Saudi oil-production and oil-shipping facilities are located on the shore of the Persian Gulf where they are in easy missile range of Iranian rockets and subject to a closure of the Strait of Hormuz by Iran to prevent oil from flowing from Persian Gulf Sunni states to the rest of the world. Building a mega-city on the shore of the Gulf of Aqaba will move Saudi oil facilities far from Iranian missiles and they will not be subject to any embargo caused by a blockade of the Strait of Hormuz. We can expect that Saudi oil pipelines will be built to this new mega-city to ship Saudi oil to the world without needing Persian Gulf access at all. Kuwait, the UAE and other Sunni nations on the Persian Gulf will assumedly become partners in this project so their oil can be sent through pipelines and shipped to the world from this new mega port as well. This will be a huge project and it has massive geopolitical significance. When completed, it will greatly reduce the importance of the Persian Gulf as a global oil shipment region.

There is much more to consider. Why do the Saudis need a huge bridge connecting Saudi territory to Egyptian territory? This has obvious military significance. Currently, if an Iranian-Saudi war broke out, Egypt would have to move its numerous tanks and armored vehicles very slowly by sea or via Israeli territory. In an Iranian-Saudi war, I believe an Israeli transit route would be possible now, but they want to have more than one option. Having a gigantic bridge across the Gulf of Aqaba would enable Egyptian tank and armored divisions to quickly motor across this bridge into Saudi Arabia to reinforce Sunni forces fighting against Shiite Iran. The link also notes that there will be Israeli cooperation in this great project. The link also describes growing religious cooperation between Saudi Islamic leaders and leaders of the Christian and Jewish religions. The Saudi Crown Prince has met with Jewish groups, Egyptian Coptic Christians, and other groups in preparation for greatly-expanded religious freedoms in Saudi Arabia. Indeed, there is even a mention that Saudi Arabia and the Vatican will sign agreements permitting the Vatican to build Christian churches in Saudi Arabia! Projects and developments such as the above are changing Mideast geopolitics very rapidly!

Let’s quickly mention other germane Mideast developments. The second link covers the inaugural commercial flight of an Emirate airliner to an Israeli airport, implementing an important part of the Abraham Accords signed by Israel, the UAE and the USA. Also, US Secretary of State Pompeo visited an Israeli settlement in the “West Bank” and the USA changed its policy to allow all goods produced in the Israeli settlements to be sold as “made in Israel” products (third link). As an example of actions being taken behind the scenes to slow down the Iranian nuclear program, a key Iranian nuclear scientist was assassinated recently (fourth link). This action was acknowledged publicly. Who knows what other actions are being taken clandestinely to help slow the Iranian nuclear program?

Now what could change under a Biden presidency? It needs to be remembered that it was the Obama-Biden administration that “gave away the store” to the Iranians in the infamous Iranian nuclear deal that Trump negated. Essentially, the USA and the West agreed to transfer over $100,000,000,000 to Iran in exchange for Iran agreeing to pretend to delay their nuclear program. The person (Jake Sullivan) selected by Joe Biden to be the new National Security Advisor was very much involved with the negotiations that led to this horrible sell-out of Western and Sunni Arab interests to the Iranians (fifth link), and it also notes that Mr. Sullivan has encouraged the rise of China on the world scene (see embedded link). Encourage the rise of China? Given China’s militarism, imperialism and its mass oppression of the Uighurs, Mr. Sullivan’s position begs the question: Whose side is he on? Mr. Sullivan was also closely involved with the disastrous decision to have the USA and NATO overthrow the Libyan government led by Muammar Qaddafi (sixth link). This led to the disastrous loss of American lives as documented in the movie, 13 Hours–The Secret Soldiers of Benghazi. The aftermath of that pointless coup led to hordes of unguarded weaponry being funneled from Libyan armories to ISIS and other terrorist entities. It looks like Joe Biden is going to appoint the same people who have already implemented very foolish policies that harmed American interests and those of our allies, a fact already pointed out by one Republican senator, Tom Cotton (seventh link).

How will a Biden presidency affect the Abraham Accords? Personally, I think even the prospect of a Biden presidency will greatly accelerate the advance of the Abraham Accords and push the Israelis and Sunni Arabs even closer together. The Sunni Arabs know that the Obama-Biden administration was pro-Iranian, and that Biden’s early appointments indicate a Biden administration will be favorable to Shiite Iran as well. The prospect of not having President Donald Trump and the USA as a reliable ally means the Sunni Arabs will need cooperation (and alliance) with the Israelis even more than was already the case. This will further the fulfillment of Ezekiel 38:1-6 that not a single nation descended from Abraham is included in the prophesied latter-day roster of nations to be in the Gog-Magog alliance that will attack the nations of the modern house of Israel and its allies at the very end of the current latter-day period in which we now live. The Arabs are descended from Abraham via Ishmael and the Jews are descended from Abraham via Isaac, Jacob, whose name was changed to Israel (Genesis 35:9-11), and Jacob’s son, Judah. The term “Israel” in Ezekiel 38-39 does not identify the Jews/Israelis (who are called “Judah” in biblical prophecies). The term “Israel” in prophetic references identifies the modern descendants of the ten tribes of Israel who were exiled from the Promised Land in the 8th century BC. Their modern descendants are found in the NATO and allied nations, as readers of my books on the history of the ten tribes already fully realize. Any religious teacher who does not understand the key difference between Judah and Israel in prophetic literature is doomed to have much of his/her prophetic expectations or predictions being wrong.

There is one other biblical point which may be of huge significance to the fulfillment of biblical prophecy. Did you notice above in the post that the Saudis are negotiating with the Vatican and other Christian groups to do such things as building Christian churches in Saudi Arabia? What if the Abraham Accords lead to a joint alliance between Christians, Jews and Sunni Muslims in the Mideast and surrounding regions? What if a grand alliance is formed between the Israelis and Arab Sunni nations as well as some Christian states which leads to the building of a new Third Temple for the Jews in Jerusalem to “seal the deal?” If this happens, many biblical prophecies move into position for fulfillment. One key prophecy that could quickly be fulfilled in such a deal would be God’s sending of the Two Witnesses. Their arrival is prophesied in Revelation 11:1-7, and their commissioning is immediately preceded by the act of a Temple being “measured” out for construction in Jerusalem. This could mean they will be sent by God as soon as the Temple site is measured and surveyed. Their mission could begin as soon as the Temple is physically staked out; it does not have to wait until the Temple is actually built.

Things could get very interesting in world affairs. For more in-depth information about topics discussed above please read my articles, Are We Living in the Biblical Latter Days?, What Ezekiel 38-39 Reveals about a Future World War III,  The Two Witnesses and The USA in Biblical Prophecy. For extensive documentation about the migrations and modern locations of the ten tribes of Israel, you can obtain it in my printed books and E-book on this subject at my website’s home page. It can also be accessed for free in some of my articles and audio messages.