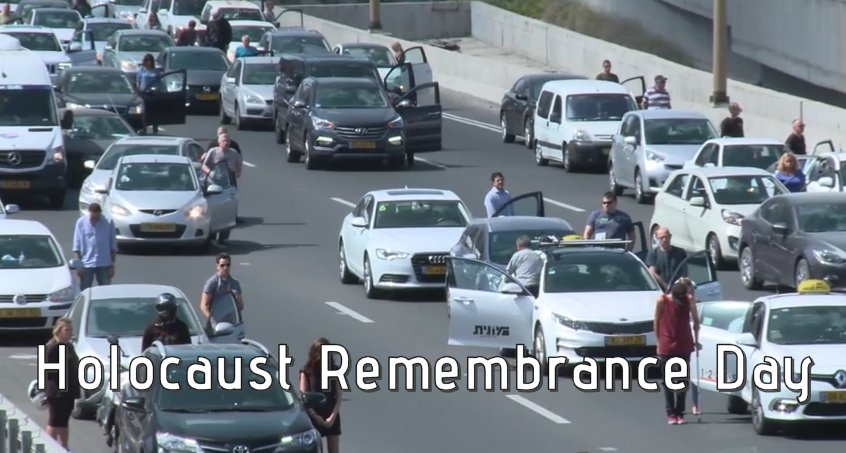 A few days ago, the Israeli nation observed its annual national Holocaust Remembrance Day, a memorial to the millions of Jews who died in the ghastly industrial murder of the World War II Nazi death camps. The scale of this genocide and the fact that a western nation could adopt the mass murder of innocents as a state policy still staggers the imagination of civilized people. On this day of observance in Israel, all traffic and activity comes to a halt for a minute while sirens wail as a memorial to the event. The first link and second link show how this happens each year. One shows the event in Jerusalem street scenes and the other shows how all traffic comes to a halt on a busy highway. Is it worth a minute or so of your time to watch how this solemn event is observed? I hope that it is. I hope and pray that I will someday be able to be in Israel and witness this happening while I observe it myself with the Israelis. I would find it most moving and meaningful. I hope the first two links give readers that same feeling.

The third link also is a video-link of how the day was commemorated a few years ago at the Auschwitz death-camp in Europe where so much of the mass slaughter occurred. A flight of three Israeli F-15s flew over the camp as one of them peeled off in a traditional “missing man” formation. As I watched the video, several thoughts occurred to me that I desired to share with readers. As an author of books that span several millennia of history from the birth of Abraham to the modern world as they document the history of the tribes of Israel, I relate to the fact that the seven decades that have elapsed from the time of the Holocaust at Auschwitz until today is a mere eye-blink in the passage of mankind’s time on earth. The contrast between the sight of powerful Israeli Air Force warplanes flying over Auschwitz evoked in me a deep response.

Consider the situation in 1945 when the Auschwitz death camp was still active. Germany and Japan were Axis powers still fighting World War II against the Allies, which included Russia and China. Today, Germany and Japan are part of the overall western alliance of nations and Russia and China are their rivals. This indicates how dramatically alliances and situations can change within a fairly short time, historically speaking. As I watched the flyover of Israeli F-15s, I wished that the 1940s Jews being herded like sheep to their deaths at Auschwitz could have had a vision of the future a number of decades later and be given a realization that, in their future, the Nazi military machine would be vanquished and gone, that a Jewish nation would rise to have a military power that would far exceed that of modern Germany, and that Jewish Air Force jets would be doing a flyover of that very camp where they died, to memorialize their deaths. Obviously, the Israeli warplanes were there with the permission of the modern German nation, which also now manufactures powerful submarines for the Israeli (Jewish) Navy. Neither the Nazis nor the Jews in 1945 would have believed it possible if they could have had a vision of these modern realities back in 1945. In a hinted warning of what will happen to any modern enemy who seeks to destroy the Jews, the video link includes a segment of the complex at Auschwitz being framed in the gun sights of one of the Israeli F-15s.

Is there any mention or hint of the Holocaust in the Bible? I think the answer is “Yes.” Zephaniah 2:1-9 contains the prophecy that the Jews (“Judah”) would have a nation of their own in the old Promised Land in the end-time prophetic period just before the “day of the Lord’s anger.” This specific prophecy foretold that the Jewish state would include the Mediterranean coast and the city of Ashkelon–which has been accurately fulfilled in the modern Israeli nation. I would like to draw your attention to several words that occur in this prophecy about the founding of the Jewish nation–which came to pass in 1948. In verse 7, it foretold that the Mediterranean coast would belong to the “remnant of the house of Judah” (emphasis added). A check with my concordance indicates the Hebrew word for “remnant” has the meaning of “residue” and the same word “remnant” is used in verse 9 although the Hebrew word translated as “remnant” has the meaning of “what is left over.” Also, verse 9 refers to the Jews who would found the end-time Jewish nation as “the residue of my people” (a different English word is used for the same Hebrew word translated as “remnant” in verse 7. [All quotes from the King James Bible.]

I think you see where I’m going with this. Zephaniah’s prophecy refers repeatedly to the Jews who would found the Jewish nation in the end-times of our age as a “residue,” a “remnant,” or as those who were “left over” of the House of Judah in the latter day period of time at the time the Jewish nation would be founded. This language strongly infers that a great tragedy had to occur to the Jews just prior to the founding of the Jewish state in the latter days in order for their survivors to be called a “residue” or “remnant” of a previously much greater population. Obviously, such an event happened during the Holocaust of World War II. Ask yourself this question: Given the historically anti-Jewish attitudes of most nations, how would the nations of the world agree (in a UN vote) to the creation of a Jewish nation in the Promised Land unless the world was temporarily overwhelmed with collective shock and sympathy when the true extent of the horrors of the Holocaust became known in the aftermath of World War II? As tragic as it sounds, God may have used the Holocaust’s horrors as the “birth-pangs” which brought forth the birth of the modern Jewish nation. The language of the prophecy in Zephaniah 2 very much supports such a conclusion. If so, this post is written to honor their memory.

In August 2000, I visited the Yad Vashem, the famous memorial to the Holocaust in Jerusalem, which leaves one very overwhelmed and moved beyond what words can express. The modern Jewish dictum, “Never Again,” is so meaningful after touring that memorial location. I do believe that in Heaven, God also says “Never Again!” This horror will not be allowed to recur. Zechariah 12:1-7 records God’s promise that he will never abandon “Judah and Jerusalem” in the latter days, and Zechariah 14 promises that when a great war occurs at the end of our age which will include a titanic battle in and around the city of Jerusalem (Revelation 16:12-17 agrees there will be a great age-ending war that includes a climactic battle in the Valley of Jezreel in the area of modern Megiddo or Har-Megiddo just north of Jerusalem), the Messiah will come and obliterate the invaders while Judah is fighting them and establish the Messianic Age or Kingdom of God on earth. We Christians believe Jesus Christ will be that Messiah, while Jews do not. Either way, for both Christians and Jews, the Messiah will come then! It is also worth noting that the prophesied great army invading Jerusalem and Israel at the end of our age comes from out of the East attacking westward toward Jerusalem across the Euphrates River (Revelation 16:12). In other words, the attack will come from the region of Iran through the territory of modern Iraq. How accurate is that prophetic scenario given that modern Iran hates the Israelis and has declared that they want to wipe the Israelis “off the map,” and that the modern Iraqi government is a Shiite ally of Iran? Zechariah 14:12 prophesies that when the Messiah comes, he will divinely “consume” their flesh and eyes off their bodies while they are still standing. That type of death describes (A) either direct divine action, (B) the effects of nuclear bombs, or (C) both options. I’m inclined to believe option C will be the case because Zechariah 14:12-14 prophesies both God and Judah’s military will be fighting vs. the invaders who come from the region of Iran when this prophecy is fulfilled. The Israeli F-15s are believed to be nuclear-capable. Wouldn’t it be appropriate if the very F-15s that flew over Auschwitz in a flyover on a previous Holocaust Remembrance Day become the messengers of death to the Jewish enemies who will invade the Israeli nation in the end times and will met their doom at the hands of both God and the Jewish military?

I hope you find these video links to be as moving as I did.