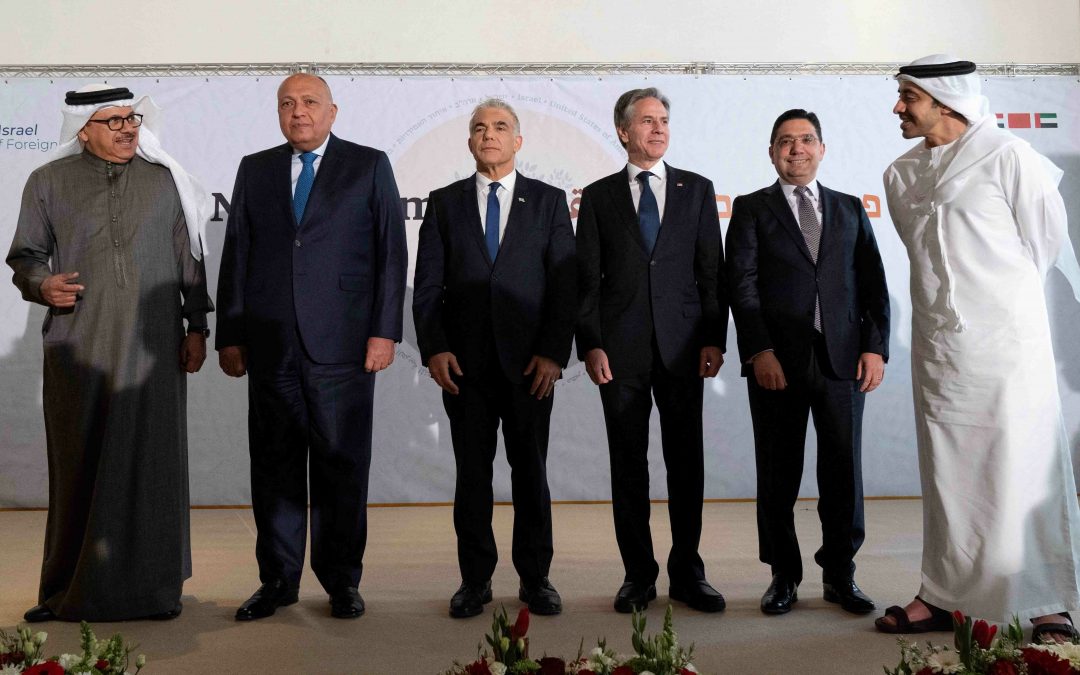 Even though (justifiably) Russia’s attempt to conquer the Ukraine is dominating world news, other important events are also occurring. An historic summit meeting has been held in the nation of Israel. The Foreign Ministers of four Sunni Muslim nations (Egypt, the UAE, Bahrain and Morocco) met in Israel with the Israeli Foreign Minister and the US Secretary of State. The first link calls this “a sign of how quickly the realignment of Middle Eastern powers is accelerating,” and observes that it shows “how relations between these [Sunni] countries and Israel have moved far beyond symbolism.” Topics discussed are reported as Russia’s war against the Ukraine, and “shared fears of a nuclear Iran–as well as shared concerns about the perceived US retreat from the region.” No doubt, the Israelis and Sunni Arab nations pointed out to US Secretary of State Blinken the foolishness of the expected nuclear deal that the US is expected to co-sign with Iran which will give Iran tremendous benefits and likely pave the way for Iran to develop nuclear weapons.

The second link adds that the Mideast leaders who participated in this historic Summit agreed to make their relationship “a permanent forum.” The third link, from the Islamic Arab media, covers this summit and mentions other important meetings which have just occurred between Mideastern leaders. As relationships between Israel and the Sunni Arab nations in the “Abraham Accords” grow closer, it is not just joint concerns about Iran’s militarism that is drawing these nations closer. The fourth link mentions that trade and tourism is growing rapidly between Israel and the Sunni Arab nations that recognized Israel via the Abraham Accords. We can expect that these trends will steadily accelerate and that more Sunni Arab nations will join the Abraham Accords to share in its economic, military and cultural benefits.

Israel is also stationing a permanent military officer in Bahrain “as part of a regional alliance…combating piracy” (fifth link). While combating piracy is likely a part of that mission, I think the major reason is unspoken. If you check a map, you will see that Bahrain is strategically located in the Persian Gulf. I suspect that having an Israeli officer present in that region also will enable close military cooperation between Israel and Sunni Persian Gulf nations if the Israelis need to make a military strike vs. Iran to make sure Iran cannot develop or deploy nuclear weapons. If a regional war erupts in the Mideast, having an Israeli presence in Bahrain will help facilitate coordination between the military forces of Israel and Sunni Arab nations.

It must be noted that a key Mideast player, Saudi Arabia, was not a participant in this historic Summit binding Israel closer to the Sunni Arab nations in the Abraham Accords. I admit that I do not understand the hesitancy of the Saudis to be a part of this process. Saudi Arabia needs an alliance-type relationship with the Israelis as the Saudis are being pressed steadily harder by the Iranians. Iranian proxy forces in norther Yemen (the Houthis) have received major weaponry from Iran and they are firing cruise missiles at and launching drone attacks toward key Saudi oilfields, refineries, etc. (sixth link). While Saudi defenses reportedly shoot down a number of these incoming missiles and drones, some do get through and hit Saudi targets. There is a real danger that one of these Iranian-supplied missiles will hit and either damage or destroy some critically-important Saudi infrastructure. Joining the Abraham Accords would give the Saudis access to Israeli help in defending vs. Iranian attacks launched by the Iran-backed Houthis.

A critically-important statement by the Israeli government as part of this historic Summit meeting is mentioned in the seventh link. While US Secretary of State Blinken “sought to reassure” the Israelis and Sunni Arabs about the impending nuclear deal with Iran, it appears the Israelis are not at all reassured about its impact on the Mideast. Israeli Foreign minister, Yair Lapid, stated that “…Israel will do anything we believe is needed to stop the Iranian nuclear program. Anything…(emphasis added).” Israel is making it clear that it is not bound at all by anything the Biden administration agrees to in an Iranian deal, and that Israel reserves the right to do anything to stop Iran having nuclear weapons. Taken to its ultimate application, that means Israel reserves the right to use tactical nuclear weapons to destroy Iranian nuclear facilities if necessary. Iran has reportedly buried its nuclear facilities deep inside mountain-sides so it may take nuclear weapons to either destroy those facilities or bury them underneath endless debris. Make no mistake about it: a weak agreement by the Biden administration with Iran will substantially increase the chances of a major war in the Mideast.

Joe Biden was Vice-President during the Obama administration which took a pro-Iranian stance in the previous nuclear deal. President Trump withdrew the USA from that deal, stating it was not in the interests of the USA or peace in the Mideast. President Biden is now tilting American Mideast policy back in favor of America’s enemy (Shiite Iran) and against our allies (Israel and the Sunni Arabs).  Biden’s foreign policy in the Mideast makes no sense.

The first link has a statement to which I’d like to draw your attention. That article, from the New York Times, says that the Summit meeting of Arab Sunni nations with Israel on Israeli soil would have been “unimaginable half a decade ago.” I beg to differ. The eighth link and ninth link reproduce posts I wrote in 2016 and 2010. These blogs are 6 and 12 years old, and both predicted that Israel and the Sunni Arab nations would be drawn steadily into an ever-closer alliance due to them being mutually threatened by Iran. So, 6 and 12 years ago I predicted the political climate in the Mideast would change to bring the Sunnis and Israelis together. I made that same prediction in many other posts as well over the years. The current Abraham Accords are a modern manifestation of what my posts predicted years ago. My posts prove that the current growing ties between the Sunni Arab nations and the Israelis were not “unimaginable” a half-decade ago.

How was I able to make such accurate predictions? I claim no divine revelation during the writing of those posts. All I did was take literally the prophecies of the Bible about the latter days–particularly the latter-day prophecy in Ezekiel 38-39. Ezekiel 38:1-6 lists the nations that will make up the “Gog-Magog” alliance in the latter days that will attack the nations of the ten tribes of Israel and their allies. Russia, China and Iran are identifiable in that listing of nations, which names modern nations by their ancient names. In examining that list of nations, I noticed that not a single nation descended from Abraham (Israel, Judah, Ishmaelites, Edomites, the sons of Keturah, the sons of Abraham’s concubines) is prophesied to be in the evil Gog-Magog alliance. It is known that the Arabs are the modern Ishmaelites. In my books, I cite three encyclopedias that comment on that connection. It is also known that the Israelis/Jews are the tribe of Judah. Since neither “Ishmael” nor “Judah” is prophesied to be in the Gog-Magog alliance, and since both Arabs and Israelis have been increasingly threatened by Iran for some time, it was a logical conclusion even years ago to predict that these two groups of Abraham’s descendants would become allies based on the maxim–“the enemy of my enemy is my friend.” This is exactly what has happened, and I find it gratifying to know this current process is called the Abraham Accords because I made this prediction years ago about the Sunnis and Israelis based on the knowledge that both the Sunnis and Israelis/Jews were descended from Abraham.

There are far more descendants of Abraham than just the Jews and Arabs in the modern world. The ten tribes of Israel are located in Europe, Scandinavia, North America, Australia and New Zealand. The sons of Keturah are most likely located in Eastern Europe while I believe the most prominent Edomite nation in the modern world is Turkey (Teman was the name of one of Edom’s most prominent clans listed in Genesis 36 and the consonants of Teman match those of the “Ottoman” Empire–the longtime previous name of Turkey). I also believe the sons of Abraham’s concubines (which were sent by Abraham in Genesis 25:6 to a land east of the Promised Land) grew into large numbers in modern India. You can see all these connections in my articles and/or blog and the ten tribes of Israel are extensively documented and traced in my books available at this website’s home page. To give readers some introductory material on these topics, I offer my articles, The United States of America in Biblical Prophecy, Four Reasons the Jews are Judah and What Ezekiel 38-39 Reveal about a Future World War III for your review. It may be difficult for modern mankind to realize it, but it has been so extensively duped by evolution and God-rejecting humanism that it does not realize the Bible’s historical narratives are provably true and that its prophecies are coming to pass literally in our modern time. Indeed, biblical prophecy confirms that many modern events, alliances, social/cultural issues, etc. were prophesied thousands of years ago in the Bible. Modern nations are literally acting out a divine “script” that was fore-ordained millennia ago. You can gain insights into that divine “script” by reading the articles named above.