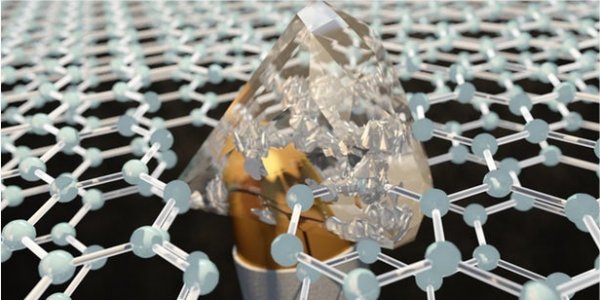 This post is intended to inform readers about some of the latest developments in high-tech weapons technologies. It has been some time since I included such an update in my posts, and this post has some very enlightening information.

The first link reveals some remarkable advances in invisibility or “cloaking” technology. Star Trek fans will recall this technology as one being used by Klingons to cloak their war-birds, but this science-fiction technology is now becoming steadily more real. This technology can hide people and objects from all kinds of detection technologies, but it was previously heavy and cumbersome to use. Scientists have now invented a way to make this technology far more practical by combining “black silicon” with silver nanowires. When this new lightweight technology is mass-produced, it could make entire battalions of soldiers essentially invisible to an enemy army. Think of the impact this would have on a modern battlefield. If tanks and planes can also be covered with this same kind of light-weight cloaking technology, the USA will effectively be able to have “Klingon-like” invisibility technologies on its weapons platforms all over the battlefield of tomorrow.

The second link also will help soldiers on a modern battlefield. Scientists have developed a super-hard defensive armor made of just two layers of graphene, a carbon-based material in a “honeycomb” pattern.Graphene is so tiny that it can be used in layers only one atom thick! This has incredible applications for defending soldiers, sailors and all people from bullets, shrapnel, etc. If it can be placed in a protective layer around objects as well as people, it could be more effective than the “shields” that Star Trek programs and movies depicted as providing protection for Starships vs. attack from enemy lasers, plasma weaponry, etc. Combining the two above technologies could fulfill the kind of protection prophesied for combatants in Joel 2 (see verses 8-9). If you add to these two technologies mechanical exoskeletons that enhance human capabilities to almost a supernatural level, one literally could have soldiers that do “leap onto walls” and jump through windows…unseen.

The third link and fourth link address electromagnetic rail gun weaponry. The third link indicates that the U.S. Army is having more success in developing a usable weapon than the U.S. Navy. The army program can accelerate objects to Mach 5 and have them hit their targets with incredible destructive force. I’m sure the size of the projectiles and their effective range is classified, but I do hope that interservice rivalry will not prevent the Army from sharing what it has learned about this cutting-edge kinetic weapons technology with the Navy. Some months ago, I had read a report that the Navy had given up trying to adapt this technology to warships, but apparently that conclusion was premature, according to the fourth link. Maybe President Trump told the Navy scientists to “try harder.” Who knows?

The U.S. Army is apparently “on a roll” in weapons development. The fifth link and sixth link detail a new Army laser-weapons program developed by Lockheed-Martin. Previously, the Army successfully tested a 10 kW, truck-mounted laser which could shoot down airplanes, quad-rotors and even disable a truck at a one-mile distance. This newer stage of development has six times the power of the previous truck-mounted laser weapon. If these laser-weapons can be successfully deployed on weapons platforms in large numbers, US military forces will effectively have the equivalent of the Star-Trek Enterprise’s “phaser” weaponry. Laser weapons would be very advantageous as they do not run out of ammunition like conventional guns. As long as a laser weapon has power, it can fire at an enemy. The seventh link offers details about the tremendous advantages and the significant challenges yet to be resolved in deploying laser weapons.

In the eighth link, we shift focus to the Israeli military. The Israelis have just developed and deployed the “Rampage” long-range, supersonic missile to use against “high value targets.” This missile can be fired by Israeli F-16s, F-15s and F-35s which can now launch these super-fast missiles from a great distance to avoid losing pilots and warplanes in close-range attacks. The link also mentions the Israelis recently launched an attack against dozens of Iranian targets inside Syria and successfully destroyed them in a 90 minute effort. I think Israel is sending Iran a message that Iran would be heavily damaged in any effort to attack Israel in the near future. This is what deterrence looks like. If Iran ever unleashes Hezbollah to fire its tens of thousands of rockets and missiles at Israeli targets from South Lebanon, Iran may very quickly experience Israeli rampage missiles hitting “high value targets” all over the nation of Iran. I wonder if this missile technology can be adapted to being fired from the torpedo tubes of Israel’s Dolphin-class submarines? The USA is reportedly well behind Russia, China, India and Israel in developing supersonic/hypersonic weapons–a legacy of eight years of neglect in the White House by President Obama, I assume. I have a suggestion. President Trump and Israeli Prime Minister Netanyahu get along famously. I suggest that President Trump call Israeli PM Netanyahu and ask him to share the Rampage missile technology with the USA. India also has a reportedly very good supersonic cruise missile called the Brahmos. Maybe Trump could simply offer to buy a quantity of these cruise missiles and place them on US bases, warplanes and warships to have their capabilities incorporated into the US military in short order.

The final link examines the strengths and weaknesses of the new Chinese warships that can be used in any future war in the South China Sea, over which China is attempting to bully the world into accepting its sovereignty. When one looks at the size of the South Chinese Sea, long-distance, supersonic cruise missiles are very much crucial to any such conflict. China has them. The USA needs them. Israel’s new Rampage missile is a long-range, supersonic cruise missile that would be very effective in any South China Sea war. I think Trump ought to call Netanyahu fairly soon to buy them for US warplanes to use. Why reinvent the wheel? The USA could mass-produce the Rampage missiles in the USA, create jobs, etc. Israel would benefit by having this crucial weapons system co-produced in the USA so it can obtain more of them quickly if their own Israeli production facilities are hit or destroyed. Sounds like a “win-win” deal to me.

Clearly, weapons technologies are advancing at an incredible rate. These links offer just some of the information that is being publicly released regarding new cutting-edge weaponry. I have no doubt that there are new weapons systems that are even more advanced which are being developed and which have already been secretly deployed. Revelation 13:1-5 is a prophecy about the future beast system of global government that will replace the current globalist system (i.e. called “Babylon the Great” in the book of Revelation). Revelation 13:4 prophesies that when the beast system is unveiled, it will reveal hitherto-unknown weapons systems that will so awe the nations that they will say “Who is able to make war with him?” At that time, I think we will learn that many of the UFOs being sighted at times around the world were actually new aerial weaponry platforms that do not use standard propulsion or flight systems. It is my expectation that they will have invisibility cloaks, laser/plasma weaponry and may be powered by a system which utilizes and focuses the earth’s own electromagnetic energies in a way which enables them to do things which are impossible for “normal” airplanes to accomplish. All you have to do to see this happen is live long enough. We are rapidly approaching that time.

For additional information about above topics, please read my article, Are We Living in the Biblical Latter Days?