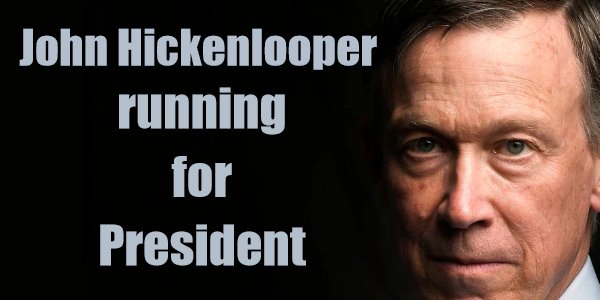 A seemingly obscure former governor of Colorado, John Hickenlooper, has announced that he is running for the presidency. Amidst the many wannabees running for the 2020 nomination, Hickenlooper may seem like a person without a chance at the nomination as he has little name identification outside Colorado. However, I think everyone ought to take him seriously because he is arguably the clear choice of the globalist insiders to win the Democratic nomination. As this post will make clear, I think we can discern the Democrat’s overall strategy for the 2020 race.

Last June, I predicted in a post that former Governor Hickenlooper would likely enter the 2020 presidential race and that he would be the insiders’ choice for the Democrat nomination (first link). Was it a divine revelation that led me to that conclusion? No. It was simply an analysis of the politics of “Babylon the Great” as seen through the lens of biblical prophecy. The globalists telegraphed their preferred choice last summer. In June, I wrote a post about the 2018 Bilderberger Convention in Italy. As I read through the list of mentioned attendees, I noticed the name of John Hickenlooper, the former governor of Colorado as being a person who was invited to that meeting of the globalist elites. I further noticed that Hickenlooper was the only possible person on the invited list who I could see becoming a contender for the 2020 Democrat nomination. Indeed, why would an obscure former governor be invited to attend this conference of the globalist elites unless he was being vetted, groomed and prepared to be the Democrat nominee for president in 2020? I made the prediction that Hickenlooper would be the choice of the globalist elites if he entered the 2020 presidential race.

Now that he has done so, I think it is clear that the globalist elites want him to be their candidate for president. They had expected Hillary Clinton to be “their” person in the White House and were shocked when Donald Trump was elected in the American 2016 election. No doubt, Hickenlooper was interviewed and vetted at length by the globalist leaders to make sure he did not have some issue or “baggage” that would torpedo his candidacy (like Senator McGovern’s running mate, Sen. Eagleton, in 1972). The globalists see their hold on global power slipping away from them and they urgently seek to re-take the White House from the nationalist/populist President Trump. The globalists need a weakened America to accomplish their one world government plans so they do not want an unabashedly pro-American president in the White House. Hickenlooper, now that he has formally announced for the presidency, will surely receive much support from the financial and media executives in attendance at the Bilderbergers’ meeting. I expect that skilled insider financiers will cleverly transfer lots of money from European bank accounts to American bank accounts from which donations will be made to Hickenlooper’s campaign.

If you notice media articles about Hickenlooper’s entry into the Democrat race, you will notice there is no mention whatsoever that he was invited to the globalist/insider Bilderberger Convention last year in preparation for the next American presidential campaign (second link and third link). I think I see a strategy at work in the Democrat campaign. The radical socialist Left has taken over most of the Democrat party and their candidates are all competing for the radical Leftist votes at the extreme left of the American political spectrum. However, these candidates are so far to the left they will have offended and driven away much of the American independents by the time the Democrat primaries are over. Even though he is a liberal, Hickenlooper will be packaged as a “moderate” in the hopes that he might be more palatable to American independents and that he may garner enough democratic delegates to secure the nomination. If there are 20 or so rabidly Socialist leftists running in the Democrat primaries, they may split the Leftist “wack-job” vote sufficiently for Hickenlooper to garner the nomination. The Bilderbergers didn’t invite any of the radical Leftist candidates to their 2018 conclave. They know they cannot be elected. Based on their exclusive courting of Governor Hickenlooper at the 2018 Bilderberger meeting, expect him to be given favorable press coverage and be portrayed as “moderate.” The only way he can be packaged as a moderate if he is running against socialists so far to the left side of the political spectrum that Hickenlooper can be seen as a “moderate” by comparison to the rest of the hard-Left field of candidates. Hickenlooper can also be packaged as someone who has had “executive experience” since he was a governor. He also has a huge advantage over many of the wacky leftist candidates. Unlike the far-Leftists who are members of Congress, Hickenlooper will not have to create a voting record over the next two years as votes are cast on the “Green New Deal,” unrestricted abortions at all times, “free stuff for everyone” programs, impeachment actions, gun control bills, etc. These ultra-leftist programs will create voting records for all the far-Left socialist Democrat presidential candidates, and these voting record will be an “albatross around their necks” in a general election. In fact, the wackier the Leftist bills become in the US Congress, the more “moderate” Hickenlooper will appear to be in comparison.

Keep in mind that the globalists are gradually losing their grip on global affairs. Besides the USA, they have lost control of Poland, Italy, Hungary, Brazil, and other nations, as well as more voters in many nations, see through the globalist plans to control the world to benefit themselves. Also, remember that the polls were overwhelmingly wrong in the Trump-Clinton contest in 2016. Almost all polls are conducted by Leftist media companies, so expect them to be as “slanted” as they were in 2016. They predicted a comfortable win for Clinton, and some media sources predicted it was impossible for Trump to win. Given that record, take all polls with a big grain of salt.

The biggest role in the 2020 American presidential campaign will be played by the Creator God who will intervene in all human matters of importance to him to ensure that his prophecies are implemented without fail. In Isaiah 41:21-26, 42:9 and 46:8-11, God challenges mankind to look at his biblical prophecies and see God’s ability to bring them to pass as proof of his reality and sovereignty over all other powers–whether they be mortal or spiritual powers. The globalists, who have been running mankind’s overall affairs for centuries and millennia since at least the time of ancient Babylon, now find themselves on the wrong side of history. In Revelation 17-18, God prophesies that the current insider cabal which has controlled the world’s politics, finances, etc. for a very long number of generations will have their systems suddenly collapse…on a global scale. Revelation 18:2-3 calls this insider global system “Babylon the Great,” and identifies the “kings of the earth” (political leaders) and the “merchants of the earth” (multinational corporations, bankers, financiers, etc.) as being in a corrupt cabal which has “waxed rich” from the global system they have presided over and manipulated. Revelation 18:10, 17 and 19 prophesy that this global system will collapse in “one hour” which was utterly impossible until now when all global communications and investment markets are all digitally linked together in real time. A global “flash crash” could easily spread through all world markets and collapse them all in one hour. There are many possible ways such a flash crash could occur, but an unexpected crisis in the global derivatives market could quickly collapse large money-center banks due to counter-party risks, which could quickly lead to the collapse of fiat currencies all over the world. The prophetic language in Revelation 18:11-14 indicates that the global merchants will still have all kinds of goods and services to sell but that “no man buys their merchandise any more.” This language accurately describes a monetary crisis, where people have lost faith in the purchasing power of fiat currencies so no transactions can be implemented or trusted.  Revelation 17:7-18 makes it clear that this sudden global collapse will not be an accident…even though it may be reported as such. Revelation 17 foretells that a cryptic alliance of “seven heads and ten horns” will overthrow the established global order and crush it so completely that it cannot recover. The Creator God is sovereign over all human affairs, so his prophecy will occur regardless of who wins the 2020 American presidential election. We will see who God decides to put in office, but I think it is clear that the globalists approved of Hickenlooper at their 2018 meetings and have anointed Hickenlooper to be their choice for the Democrat nominee in 2020. However, the power of the insider globalists is in decline as the fulfillment of Revelation 17-18 approaches, so their choice may not even be nominated. We will have to wait and see. Remember that their choice (Hillary Clinton) was defeated in the 2016 election.

For more information about the end-time prophecies of the Bible, please read my free articles, Is Babylon the Great about to Fall…Ushering in a New Beast System? and The Babylonian Origin of the Modern Banking System. The former article was written after the 2008 near-collapse of the global financial system, but its commentary about biblical prophecies is still valid today. After reading the latter article, you will understand clearly why the Bible calls the modern financial system “Babylon the Great.”