HAVE WE ENTERED THE “BEGINNING OF SORROWS?” 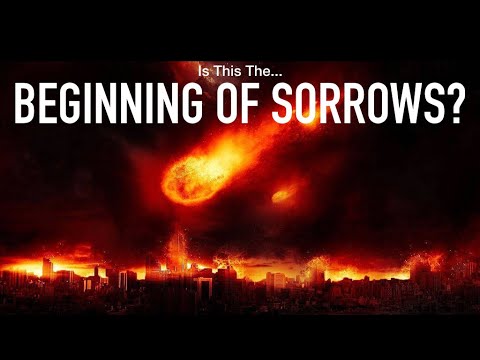 In Matthew 24, Jesus was asked by his disciples to describe what the signs would be that his return was imminent. Jesus’ reply lasted from Matthew 24:4 through Matthew 25:46 and it included specific warnings, parables, etc. Near the very beginning of his response, Jesus describes a time would come which he called “the beginning of sorrows,” a time when the end-time prophecies about global traumas would begin to take place. In Matthew 24:6-7, he listed a number of specific items which would reveal that the period of time called the “beginning of sorrows” had arrived. This post is about those prophesied items and will possibly offer a new possibility in how we should look at and evaluate Jesus Christ’s warning.

The global events that Jesus said would mark this specific prophesied period of time were “wars and rumors of wars…famines, pestilences and earthquakes in divers [various] places.” A parallel account of this discourse is found in Luke 21:10-11, but Luke’s account mentions other factors not stated in Matthew 24. Luke 11 adds “fearful sights” and “great signs…from heaven.” Later, in Luke 21:25, Jesus added that signs in the sun, moon and stars will also precede his return as would the phenomenon of “the sea and waves roaring.” Let’s consider these prophesied events and consider whether we may have entered the “beginning of sorrows.” In the past, I have (as have many Christians, I believe) interpreted these verses as meaning that there would be a rising frequency of the prophesied events as we progress deeper into the latter days. Indeed, wars, earthquakes and pestilences have been part of humanity’s experience for millennia. What will be different about these signs in the latter days that fulfills this prophecy? One is that a gradual increase in the frequency of these types of events could fulfill the prophecy. However, I’m also beginning to think that what Jesus Christ meant was that all of these events would start happening simultaneously in a way that is unprecedented in recorded human history. Let’s consider this option.

First, let’s consider “pestilences.” We all know that the current coronavirus pandemic is afflicting all the nations of the earth. This has not happened since the Spanish flu pandemic in the early 20th century. In past years, we have looked at Ebola outbreaks or other possible deadly epidemics in some parts of the world as perhaps fulfilling this prophesied condition. However, we now have a disease which is affecting everyone…everywhere. It is impossible to ignore it. It infects and kills people, and could destroy entire national economies due to the severe economic and social problems caused by the lock-downs. I feel no need for links to document this “pestilence” as its effects are dominating the global media and public awareness. It also looks like it will not subside any time soon. Now consider “wars and rumors of wars.” This wording includes actual combat in some locations and the possibility of armed conflict in other locations. Currently, we have long-standing conflicts being fought in Yemen, Afghanistan and the Syrian-Iraqi region. A locally-intense war is being fought in the Caucasus Mountains between Armenia and Azerbaijan with Turkey backing Azerbaijan and Russia being allied to Armenia. There is currently a hiatus in the civil war in Libya, but it could erupt again. There was a border battle fought between India and China in the Himalayan region recently. “Rumors of wars” certainly apply to the entire Indo-Pacific region (the South China Sea, the Korean Peninsula, the Chinese-Indian border region, etc.). There is also civil unrest in Belarus and the on-going desultory war between Russia and the Ukraine in Asia. Terrorism could also lead to wars breaking out into open conflict in various areas. “Famines” are a fact of life all over Asia and Africa and the third world, but previous posts have documented the additional recent threat to global food supplies posed by the huge locust plagues that have spread through Africa and Asia. There have been damaging earthquakes in several places in recent years, and just days ago a severe earthquake caused extensive damage, loss of life and injuries in Turkey and Greece with the most affected city being Izmir, Turkey (first link).

Eclipses and comets could fulfill prophecies about “signs in the heavens,” but could this prophecy also be fulfilled by a phenomenon that is all over the world and puzzles many nations. Consider UFOs. They are a mysterious “sign in the heaven” that has puzzled and/or frightened mankind for decades, and triggered much speculation about whether they are alien spacecraft, secret military aerial platforms, or could it be a combination of both possibilities or something else? Many TV documentaries on cable-TV channels are devoted to UFOs, ancient mysteries, etc. UFOs are ‘”fearful sights” and “strange signs in the heavens” to mankind. [I have my own opinion about UFOs, but that is a topic too broad to include in this post]. Consider the “sea and waves roaring” mentioned in Luke’s prophecy. This would include hurricanes and possible tsunamis caused by earthquakes.

Even as the coronavirus has become a global pestilence, we have also entered a time of unprecedented hurricane and typhoon activity. The second link reports that the Atlantic hurricane season has tied the record for named Atlantic storms. Indeed, so many tropical storms and hurricanes have formed that the list of names for the 2020 season has been exhausted and we are now using Greek letters of the alphabet to describe them. The previous all-time record was in 2005, and if we have one more named storm, we will set a record for the most named Atlantic storms ever. Hurricane Eta has become a powerful category-4 hurricane and is hitting Nicaragua and other Central American nations with very high winds, dangerous storm surges of 14-21 feet and rainfall so intense it will be measured in feet, not just inches. Forecasters are saying it may weaken and then re-form in the Gulf of Mexico and head for Cuba and Florida (third link).

However, the Pacific region has also been setting records in the intensity of and damage from this year’s typhoons. The Philippines have been particularly hard hit. Typhoon Goni recently hit that nation with very destructive Category-5 winds. It was so big and powerful that it is described as “‘…the strongest land falling tropical cyclone’ in history…” as it affected between 19-31 million people (fourth link). Did you even hear or read about this most powerful Pacific cyclone ever? Our American media is so obsessed with the minutia of the presidential election here in the USA and the world press is so obsessed with the coronavirus that mankind scarcely notices record-breaking events like typhoon Goni. This storm is expected to also hit Vietnam after weakening due to its path across the Philippines.

Clearly, we are at a point in time where all the factors prophesied in the books of Matthew and Luke as characterizing the “beginning of sorrows” are now present at the same time. If the global coronavirus continues to take a major toll on people and the global economy, it will lead to more national hardships which could lead to more wars and global traumas. Keep in mind that there will be no blinking “neon sign” in the heaven telling us that the “beginning of sorrows” has begun. Jesus Christ told us to “watch” world events (Matthew 25:13) in light of the Bible’s prophecies to discern when major prophecies are reaching stages of fulfillment. The vast majority of the world will not understand any of this (Revelation 12:9), and the parable in Matthew 25:1-13 informs us that the vast majority of believers will also be “asleep” and many will not discern the fact that prophecies are being fulfilled until it is too late.

Last year, I wrote a post that offered a new perspective on Archbishop Ussher’s calculation concerning the year of Creation Week, based on the “one day equals one thousand years” principle that is found in Psalm 90:4 and II Peter 3-8. I have included that post as the fifth link, and urge that readers review it. It adds a new biblical perspective to Archbishop Ussher’s calculations that most prophetic analysis has not noticed. When that new biblical perspective is added to his calculations, they become remarkably relevant for us today. That post was written prior to the unleashing of the coronavirus on mankind, an event which makes the points in that post even more applicable to today’s events than when I wrote it last year.

If there are any readers who doubt that we are living in the “latter days” prophesied in many locations in the Bible, please read my article, Are We Living in the Biblical Latter Days? If you find the information in that article persuasive, please forward it to as many of your friends as might be interested in biblically-based perspectives on the extraordinary times in which we are living.