Has Turkey Embargoed Russian Ships from the Bosporus and Dardanelles? 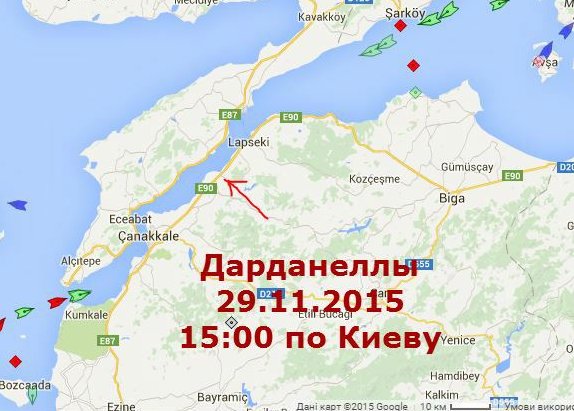 Turkey may have taken a very dangerous step which could provoke a war with Russia. According to the first three links, Turkey has shut down access to the Bosporus and Dardanelles straits to Russian maritime traffic. I’m not sure which media source initially broke this story, but, if true, it has very serious ramifications. The first link is from a media source I had previously not seen, but it was found in a web search. The second link also has reported the story, and I’ve include the third link as evidence that other sources are noticing this development and posting it on their sites as well. The final link offers a more in-depth analysis of the troubled and changing relationships between Russia, Turkey, Iran and Syria. It also discusses the economic sanctions which Russia has slapped on Turkey after Turkey shot down a Russian warplane.

Russia is demanding an apology from Turkey, and, so far, Turkey refuses to give one. Turkey did extend one small olive branch to Russia by offering to return the body of the slain Russian pilot whose jet was shot down. Perhaps Turkey is seeing whether Russia will grant a Turkish aircraft landing rights at a Russian airport to return the body before Turkey lifts the blockade on Russian ships transiting these key straits.

If Turkey really has imposed a strict embargo on Russian ships transiting the straits and it persists in this embargo, then war would become inevitable at some point. Russia must have access for its civilian and military vessels between the Black Sea and the Mediterranean Sea and will consider Turkey’s closure of the straits to Russian vessels to be an act of war if this goes on for too long. Hopefully, Turkey is simply putting this on the table as a bargaining chip to be removed as part of some diplomatic agreement to defuse the confrontation.

However, cool heads are not always present in international confrontations. Sometimes they escalate. If Turkey continues to embargo Russian ships from the straits (an act of war), would Russia give Turkey an ultimatum to remove the blockade “or else?” Would Russia consider detonating a very small nuclear weapon just over 12 miles off Turkey’s Black Sea coast to give it a final warning, and to remind Turkey it is playing with fire by provoking a nuclear superpower? If Turkey thinks all of NATO will rally to fight with it against Russia over a Syrian border snit between Turkey and Russia, Turkey may find itself all alone rather quickly. The civilian populations of the NATO nations do not want a war with Russia. The governments of NATO nations do not want a war with Russia. Russia is, I believe, the largest nuclear power on the planet. Turkey would do well to remember that fact.

I suspect that the most important meetings being held at the “climate change” conference in Paris will have nothing to do with global climate change (much to Obama’s chagrin). The assemblage of world leaders is likely far more preoccupied with side-meetings regarding: (A) defusing the Russian-Turkish crisis, (B) fighting ISIL and global terrorism, and (C) the growing refugee crisis which is spreading from the Mideast to Europe and beyond.

I’ve often noted that the time context of the biblical prophecy in Ezekiel 38-39 is for its fulfillment to occur at the very end of this current age. We are not yet that close to the end of the age. Babylon the Great has not fallen, the Two Witnesses have not conducted their 3 and 1/2 year warning message, and the beast power has not yet come into being. Therefore, I do not expect the current Turkish-Russian confrontation to escalate into the global war foretold in Ezekiel 38-39 which culminates in the coming of the Messiah [i.e. “Jesus Christ” to us Christians] and the establishment of the Messianic Age/Millennium. However, Matthew 24:6 contains Jesus Christ’s prophecy that “wars and rumors of wars” will characterize the build-up to the end of our age and his Second Coming. We now have a “rumor of war” between Russia and Turkey.

While we hope this Turkish-Russian confrontation will be defused, it is possible that there will be smaller proxy or regional wars between some members of the Gog-Magog alliance vs. other global nations before the ultimate war in Ezekiel 38-39 takes place. Regional wars are possible between Iran and the Sunni Arabs, between China and a variety of nations over China’s militarization of the South China Sea, the Ukrainian conflict could escalate into a wider war or the current Mideast situation with Russia and Turkey could escalate into actual fighting. We will simply have to watch and see what happens. We do live in dangerous times.