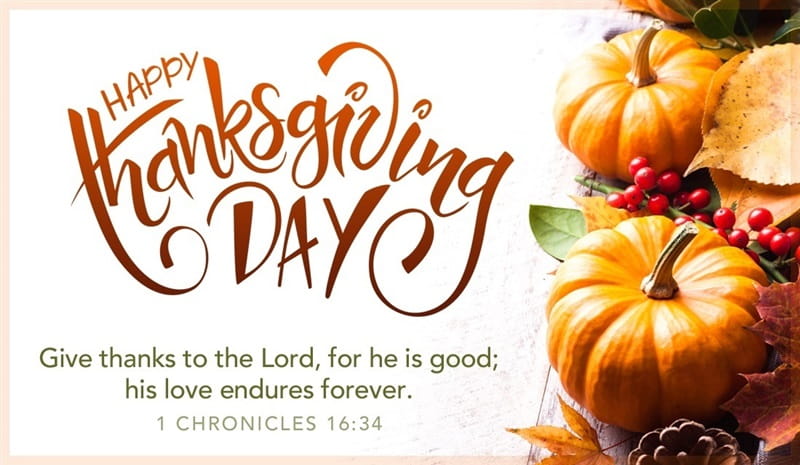 November 28th is Thanksgiving Day in the United States of America. It was originally proclaimed as a national day of giving thanks to God for his blessings of freedom, abundance and protections upon our nation. It has now become a kind of national pilgrimage day where children and grandchildren return to the homes of their families of origin for family time and celebrating a day of turkey dinners, turkey left-overs, mashed potatoes, sweet potatoes, green bean casseroles, dressing, cranberry sauce, pumpkin pie, etc. There are regional variations of course. In my younger years, it would have been unthinkable for my Norwegian relatives to host a Thanksgiving Day dinner without copious amounts of lefse for everyone.

Thanksgiving has become such a pilgrimage observance that it is often the highest travel weekend of the year in the USA, and airports and highways are clogged with millions of extra travelers. This holiday in 2019 is going to be a challenge for many travelers as the US is being hit by two major winter storms which will spread west to east across much of the nation. The first storm passed through our region yesterday and left 4 inches of heavy, wet snow in my city–Sioux Falls, South Dakota. Nearby Minneapolis had over twice that amount. However, in the Midwest we are prepared for winter storms and most areas have been plowed out and the roads are accessible again. The second storm will affect many parts of America west of us on Thanksgiving Day and then spread eastward over the next few days. In our region, it has been called by the media a record-setting November winter storm event.

While there are still Americans who commemorate and remember the original solemnity of this day, it has largely become a “speed bump” on the road to Christmas. This is unfortunate, but a fact in our modern agnostic, secularized society which does not want to retain God in its knowledge (Romans 1:28). Many people regard it simply as “Turkey Day” and observe it by watching NFL football games all day.

Families are very busy at this time of year in the USA, so I will keep this post relatively brief. Please join me in giving thanks to our Almighty Creator who has surely given the USA unique and incredible blessings, especially throughout the post World-war II period. May his mercies continue upon our land and people in spite of the increasing sinfulness of modern societies all over the world. I’d like to cite a biblical indication that he may, indeed, do exactly that.

The Bible is a book about covenants between God and mankind. The covenant God made with the ancient twelve tribes of Israel at Mt. Sinai, based on the Ten Commandments, was a conditional covenant. If the Israelites were obedient, they would be blessed and stay in their land. If they were chronically disobedient they would be expelled from their lands that God gave them. They did become very disobedient, and God sent them into exile from their Promised Land. The northern kingdom of Israel went into exile in the 8th century BC and the southern kingdom of Judah (from which came the Jews) went into exile in the 6th century BC. However, God had made a previous covenant with their patriarch, Abraham, that God would bless Abraham’s seed with vast population growth eventually resulting in many nations, and national wealth and prosperity, strategic geographical blessings, victories in warfare, etc. for Abraham’s “birthright” descendant nations. That covenant was unconditional and it was based on Abraham’s obedience and friendship with God, not the obedience or disobedience of Abraham’s descendants. That covenant was passed on generationally to Isaac, Jacob/Israel and then to Joseph’s sons, Ephraim and Manasseh, who have retained this “birthright” blessing ever since. My books detail their later kingdoms, migrations and empires throughout history, but I am going to close this post with a prophecy about Ephraim and Manasseh in the latter days. Genesis 48-49 includes many latter-day prophecies (Genesis 49:1), and it includes prophecies about the characteristics and traits of each tribe of Israel in the latter days. Genesis 49:22-26 reveal that the latter days will be a time when God will greatly pour out upon the tribes of Ephraim and Manasseh (the birthright tribes) the great benefits of the unconditional covenant God made with Abraham. These tribes, basically the British and American nations, have been blessed and unusually favored in their histories due to this birthright blessing.

Many biblical prophecies foretell that the latter days will be a time of spreading evil, deception and sinful degeneration among all the peoples of the earth (see II Timothy 3:1 for one such example).  However, in spite of the fact that the Israelite nations were not exempted from this lamentable state of spreading sinfulness in the latter day, God nevertheless decreed the latter days would be a time when he would especially pour out the benefits of the unconditional birthright blessings on the nations descended from Ephraim and Manasseh. Genesis 49:22-26 details this gracious dispensation upon these two tribes, even though God foreknew it would be sinful time among all nations. Indeed, God even committed himself to strengthening and defending these nations descended from Joseph (the father of Ephraim and Manasseh) even though he also foreknew they would be attacked, shot at and hated in the latter days. God’s honor and trustworthiness are at stake in the keeping of his prophecies (Isaiah 41:21-26), and the continuing blessings upon the British and American nations attest to God’s faithfulness to his prophecy in Genesis 49:22-26. In spite of the fact that all global nations are continuing to worsen and degenerate, the British and American nations still retain a disproportionate share of the world’s resources, blessings, wealth, etc., just as God decreed in Genesis 49:22-26.

We in America have the observance of Thanksgiving Day to commemorate and remember God’s singular and continuing blessings upon our land and people. I urge my fellow Americans to say a special prayer of thanksgiving to God during this Thanksgiving Day weekend to thank him for his grace upon our nation. You may also wish to remember and be thankful that Abraham was a righteous and obedient friend of God. Because of Abraham’s relationship with God, God gave his “birthright” descendants special blessings that would last throughout our age. Without Abraham’s righteousness, we would not be enjoying these birthright blessings today.

Again, have a great Thanksgiving Day and weekend!