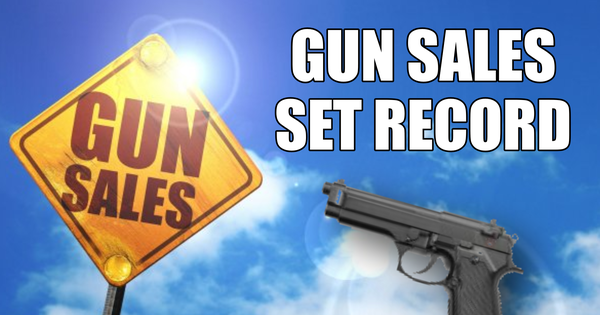 Americans are buying guns and ammunition at unprecedented levels. There have been previous peaks in gun sales, but what is happening today is incredible. Americans are buying guns “as if there were no tomorrow.” The first link, from the Minneapolis media, reported in a September 8, 2020 article that March gun sales saw a new record with 2.3 million federal background checks for gun purchasers nationally. It also reports that the previous yearly record was 15 million in 2016 (during the last presidential election), but that in 2020 there have already been 13.7 million gun purchase background checks with four months yet remaining this year. That means the previous record may be completely shattered in 2020 with perhaps 20 million gun background checks being performed in 2020. The first link focuses on the civil unrest in Minnesota as being a primary cause for high gun sales in that state, and it mentions that many buyers are first-time gun buyers.

The second link examines the massive increase in gun sales in the so-called “battleground states” in the 2020 election and concludes with an observation that the firearms industry conducts its own (private) polls and they expect President Trump to win the election. As has been discussed in previous posts on this subject, each background check can result in more than one gun purchase, so we really have no idea how many guns were actually purchased, but it is a safe bet that more guns were sold than just the number of background checks. The third link adds that June gun background checks for semi-automatic guns outstripped sales of shotguns by a 2-1 margin. This indicates to me that far more guns are being purchased for self-defense purposes than for hunting.

The second link also reported that “US civilians have owned 423 million firearms between 1986 and 2018, which translates to about five guns for every three American adults. ” I think there is a mistaken wording in that quote. I believe it should have said Americans “purchased” that many guns between 1986-2018, not merely “owned” them. The number of guns actually owned by American civilians is surely far higher than 423 million because Americans owned many millions of guns prior to 1986, and many of those guns purchased before 1986 are still in good working order. The 423 million gun sales total is an estimate based on, I believe, the federal background gun checks done from 1986 through 2018.

It is not hard to realize why this increase is occurring. With the presidential election in progress, fears that a Democrat will win the White House are fueling many gun purchases–just as happened in 2016 when the fear of Hillary Clinton being elected led to a wave of new gun sales. However, much more is at stake than that single factor. The raging civil unrest and street criminality in many US cities, caused by Antifa and other radical Leftist groups, has caused many shopkeepers and private homeowners to own firearms to protect themselves if necessary. The bizarre call for the “defunding of police departments” in a time of growing crime and lawlessness also leads many to buy firearms since they are justifiably worried the police may not be there to respond when they are needed. The Left’s effort to “defund the police” is incredibly short-sighted. If there is no police department and even if there are greatly-reduced police departments, one outcome is virtually certain. Business groups, residential groups, and all kinds of organizations will effectively create their own Constitutionally-protected militia groups to provide for their common defense. Any such militias would not be bound by any police department regulations, and many of them could have a “shoot first and ask questions later” attitude. It makes far more sense to keep police departments operating as they are because they are trained in how to handle threatening situations. It must also be noted that the overwhelming majority of police officers are well-trained and devoted to the “protect and service” motto many police departments have. Surely, where police misconduct is proven in a court of law, judicial penalties are appropriate, but such cases are very rare. The truth of the matter is that without the “thin blue line” in jurisdictions all across America, normal civilization would disintegrate into the law of the jungle.

The huge number of gun sales also have created a massive wave of demand for ammunition, especially in the more popular calibers. The fourth link and fifth link discuss the severe shortage of ammunition available in the US market due to high demand, and the sixth link offers many photos of empty or near-empty gun shelves due to customers’ buying up available supplies of ammunition. I decided to do my own investigation on the ammunition shortage so I visited a number of stores where ammunition is sold. I can confirm the shortage exists and it is severe. It is next to impossible to find many popular calibers of ammunition such as .38, .357, and 9 mm. Many rifle calibers are hard to find. Shotgun ammo is plentiful as dealers (at least in my state) no doubt stocked up for our state’s Fall pheasant hunting season. I asked store staff about the shortages and some stores say they receive shipments daily but the shelves are emptied within about two hours. One hardware store told me they have been unable to obtain any ammunition supplies in four months! One clerk candidly told me that “everyone is buying guns and ammo because they are scared about what will happen after the election.”

There is an issue that is being discussed and examined at many websites, including foreign websites (seventh link). The issue is getting more pressing since it is a real concern whether the losing side will accept the outcome of the November elections. House Speaker Nancy Pelosi has advised candidate Joe Biden to not concede no matter what, and news sources are quizzing President Trump if he will peaceably yield power if he loses. This issue is getting even more problematic because; the vast increase in mail-in and absentee voting during the COVID crisis creates situations where cheating can more easily occur. For example, there are already a growing number of reports that postal workers (who generally belong to Democrat unions) are throwing away mailed Trump votes so they won’t be counted. Indeed, there are so many such reports that I’ve included the eighth link so readers can review as many of them as they wish. Obviously, election fraud is already taking place. Will the courts have to decide the winner as happened in the 2000 election (remember George Bush, Al Gore, and the “hanging chads?). Court involvement is growing greater the more that voter fraud is being made known in absentee/mail-in voting. Even if the issue is decided on election day or soon afterward, the threat of civil disorder could grow. If Trump wins, the radical Left will likely unleash more criminality in the streets. If Biden wins, militias will likely form throughout the Red States to protect their Constitutional Rights. Either option leads to logical reasons why firearms and ammo are selling at unprecedented levels.

I think there is some biblically-based commentary on this issue that can be made. Long-time readers of this blog realize that history overwhelmingly confirms that the so-called “lost ten tribes of Israel” are found throughout the Western world. The two tribes descended from the biblical figure, Joseph, are Ephraim and Manasseh. These two tribes were given the chief blessings by God when Israel/Jacob gave it to Joseph’s two sons (Genesis 48:8-21). Ephraim was prophesied to grow into a “multitude of nations” while Manasseh was to become “one people” (KJV). The reasons to believe the USA is identified with the tribe of Manasseh are very abundant, whether viewed via biblical prophecy or secular history (see my article, The USA in Biblical Prophecy), while Ephraim’s people are found in the British nations. The prophecy in Genesis 48:19 does not allow for the possibility of Manasseh’s nation to subdivide into two or more nations. In the USA’s 1860-1865 civil war, the South was very close to winning its independence at several junctures, but it is my belief that Genesis 48:19’s prophecy did not allow for that outcome to occur. Today also, I do not see that prophecy allowing the USA to be divided, in a civil war, so I do not expect that to happen. Russia, China, and Iran would be thrilled to have the USA descend into a civil war (and they may actually be fomenting such a disastrous event), but I do not believe that will occur. Nevertheless, we will see what happens after the election and the eventual inauguration. Meanwhile, gun and ammo sales will continue at very high levels.

In closing, I’d like to make the observation that if you desire to buy a firearm in the USA and have not yet done so, it may already be too late to obtain the kind of gun you want. It may also be very hard to find any ammunition for it.