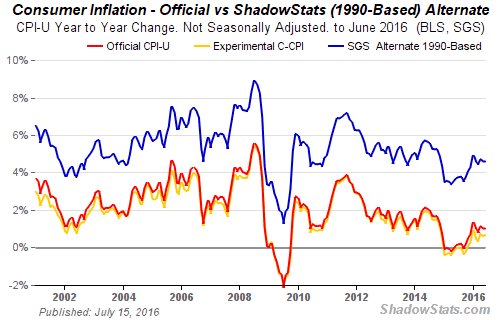 An iconoclastic writer, I.F. Stone, authored a famous quote: “All governments lie, but disaster lies in wait for countries whose officials smoke the same hashish they give out.” His quote is in the first link, and I believe he was largely right, never more than in today’s world as governments seek to cover up their politically-correct or self-serving insider agendas with endless lies both spoken and written. One of the easiest ways to lie to a nation’s people is to issue false “official” statistics. It is in this aspect of lying that the US government excels. It is not just the current Obama administration that does this; previous Republican and Democratic administrations have done it as well. I doubt that any honest government statistics have been issued since the presidencies of Ronald Reagan (who didn’t need to lie about how good things were going in his presidency) and Jimmy Carter (who was at least honest about how bad things were going in his presidency). I will offer several examples of just how pervasive the lying has become in US government statistical reports, as readers should all be aware that economic realities are far worse than the US government (and many other governments too) want anyone to realize.

Let’s look at the unemployment and inflation data released by the US government. The second through the fourth links offer charts on key aspects of US economic statistics, and these links are taken from the shadowstats.com website, which is an independent watchdog site to correct the endemic falsehoods presented in official US statistical reports. The second link‘s chart shows that the actual unemployment rate in the USA is far higher than US official reports would have you believe. The chart show that the real US unemployment rate is close to 24%, not the 4.9% or 5% rate in the official chart. More and more prominent people are openly exposing the fallacy of the official rates. This week, I heard Sean Hannity, on his radio program, call the official unemployment rates “lies,” and I’ve heard Donald Trump in his televised campaign rallies periodically cite a real US rate of unemployment close to the rate given in the second link (maybe he reads that link too).

All governments want to spend far more money than they have, but they don’t want the people to realize how bad their profligacy is. The shadowstats site confirms how bad the lies really are. The lies in the inflation rate have dramatic negative consequences in the real economy. For example, many fixed incomes for social security recipients and other pensioners have their pensions tied to the rate of official inflation. Since the official rates are always understated, it means that all pensioners are falling steadily further behind in the struggle to make ends meet. Retail sales data and GDP data are also badly skewed by phony inflation rate data. For example, if the economic press rosily cite reports that retail sales have gone up 2%, they leave the impression the economy is growing when it is actually shrinking. If the real rate of inflation is 4%, retail sales would have to also go up by 4% just to stay even! In such a case, retail sales would have to go up more than 4% to show any increase at all. Consider also the GDP reports, which regularly report a growing GDP, making the incumbent administration look good when in fact the actual economy is in a prolonged recession. The fourth link makes that fact most evident. It shows that the official GDP “growth” rates are routinely reported as being in positive territory; however, the real annual GDP rate of change has been negative for almost the entire last fourteen years! This shows how deep and lasting the current US recession really is–something political insiders desperately want to keep the average voter from realizing. I think that is one reason the entire insider establishment is terrified of Donald Trump–he tells the truth about how bad the US economy really is for the middle- and working-classes, something the insider candidates of both parties will not do. That Trump was so popular in the Republican primaries confirms that many millions of American voters already know the government is lying about the real state of the economy and they are thrilled to hear a candidate who tells the truth about it. Unless the truth is honestly stated and faced, policies will never be adopted to correct the mess the US economy really is in.

Let’s look at one more area of statistical deceit. In spite of a brief blip of downward pressure in the US stock market after the UK’s Brexit vote, the stock markets have been recently setting new highs! This must mean that private investors are pouring money into the stock market, right? Wrong! The fifth link reports on the fact that private investors are “skittish” about US equity markets and are withdrawing their funds from stocks at a prodigious rate. If real money is being sucked out of the stock market by investors, the price of stocks should be dropping to match the outflows of funds. That’s simple math. However, as the article notes, the outflow of funds comes at a time when stock market indexes are hitting “record highs.” The print version of the article, which I saw in USA Today, includes weekly charts of the outflow of funds from stock funds from the beginning of 2016 through the end of July. If you add up the weekly totals of outflows, one reaches a total of approximately $102,000,000,000 pulled out of US stock market funds by investors just in the first seven months of 2016! Even more ominous is the fact that $17,500,000,000 were sucked out of the stock markets in just the last two weeks of July! That means the outflow of funds from stock markets is accelerating rapidly. Hmm. If funds are being yanked out of stock market funds at a growing rate, why is the stock market hitting new highs when it should be dropping proportionately with the outflow of investor funds from those markets? My guess is that the US Federal Reserve Board is creating money out of thin air to “give” to big banks and market makers to buy stocks to artificially prop them up to conceal the real selling pressure that is in the markets. The sixth link examines this likelihood. If so, this would make the Fed the “buyer of last resort” as well as the “lender of last resort” that it has become as it monetizes the US federal government’s debt by creating money to buy the US Treasury notes that no one in the real world would buy. This deceitful game cannot go on indefinitely. My opinion is that the insider elites are trying very hard to conceal how bad things really are until after the elections because they want to do all they can to help Hillary Clinton, a consummate insider, get elected so the insider elites can retain their hold on power. The final link offers some excellent political cartoons, but the one dated August 1, 2016 aptly depicts how Hillary Clinton is the insider/Wall Street candidate for president.

What does this have to do with biblical prophecy? Potentially, a lot. These links show just how perilously close the US economy is to a major systemic crisis that could strike it very quickly because the real economy has been far worse than the official statistics have reported for many years. The final part of the quote cited at the beginning of this post is that the governments that lie are heading for “disaster” when their officials essentially start to believe their own lies. Revelation 17-18 foretell that in the latter days, the global financial/monetary/mercantile system will experience a collapse of epic proportions, and Revelation 17:5-16 add that an alliance of nations or powerful entities (the “seven heads and ten horns”) will deliberately act to pull down the corrupt latter day global system–called “Babylon the Great” or “The Great Whore” in Revelation 17-18. These links  confirm the US economy is ripe for a fall, but that this fact is being concealed from citizens/voters by phony statistics. The real world data in these links indicate that the global collapse prophesied in Revelation 17-18 is surely drawing closer. I don’t “set dates,” but it is wise for all readers to prepare their own personal situations to get ready as best they can for such an epic global crisis. For additional in-depth reading on these subjects, I recommend my free articles, Is Babylon The Great about to Fall…Ushering in a New Beast System?, The Babylonian Origin of the Modern Banking System, and Should Christians Prepare for Future Hard Times?