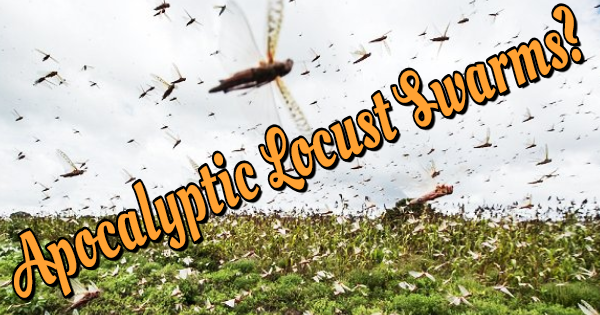 In mid-February, I wrote a blog piece entitled Huge Locust Plagues Sweeping Central Africa. It documented the immense size of an emerging locust plague–one which was the biggest in East Africa in 25-70 years depending on which nation was affected.

The locust swarms in East Africa have re-emerged and they are much bigger than the first wave of swarms. Indeed, they are 20 times larger in size (second link)! Swarms of billions of locusts are spreading throughout East Africa, consuming crops, gardens and all vegetation wherever their migration takes them. The nations of Somalia, Kenya, Uganda, Ethiopia, South Sudan, Djibouti, Eritrea, Tanzania, and the Congo are already suffering from this second wave of expanding locust swarms. Yet, as bad as this threat is to the food supplies for a significant area of the African continent, one hears almost nothing about it in the media. The media is, understandably, so preoccupied with the coronavirus pandemic that this threat to the food supply of millions of people draws scant attention.

Indeed, the coronavirus prevention campaign is actually making the locust plague worse in the above-named nations. The second link reports that “lockdown” orders given to local African populations to slow the coronavirus from spreading are preventing people from taking measures to fight the locust plague. This is a clear overreaction to the coronavirus. While the coronavirus threatens a small percentage of people with death (1-10% of those infected depending on the nation), the starvation caused by the unrestrained growth of locust swarms will threaten 100% of the people in the affected nations with food shortages or starvation. What is even worse is a report by a UN agency that weather patterns promoting increased growth of the locust swarms could result in another major outbreak of more locust swarms…just in time to eat the summer harvests in East Africa that survive this current locust outbreak. The previous swarm of locusts in February had some locust swarms reaching into Pakistan and South Central Asian nations, so this locust plague is a threat to food supplies outside of East Africa as well. If the current locust swarms spread westward into Northwest Africa, a Spring or Summer hurricane could blow some locust swarms across the Atlantic Ocean to South America and the Caribbean region. If this happens the world will have two concurrent global plagues: the coronavirus pandemic and locust swarms expanding to several continents.

The third link offers another perspective on the massive locust outbreak and the fourth link includes some of the third link’s material but adds additional facts as well. The fourth link uses very apocalyptic language to describe how severe this locust plague really is becoming. It includes descriptions about the dire threat from a UN agency that calls these locust swarms “‘an unprecedented threat’ to food security and livelihoods,”  “extremely dangerous,” and warns of “exceptionally large swarms like never seen before (emphasis added).” UN agencies generally use measured and diplomatic terminology in their assessments of situations, so their use of this kind of apocalyptic language illustrates just how bad the threat really is. The warning that this is a locust plague threat “like never seen before” means that it is the worst such plague in the history of Africa. The local coronavirus measures and the lack of air transport services to fly in the pesticides needed to fight these swarms argue that they could get larger and more threatening to an increasing number of nations in the future.

The current world situation reminds me of the language of the prophecy in Matthew 24:4-8 that wars, rumors of wars, earthquakes (and related tectonic activity such as tsunamis and volcanoes), famines and pestilences on a global scale will mark a juncture in the latter day’s sequence of prophetic time called the “beginning of sorrows.” We have had wars, rumors of wars and major tectonic events for years, but the coronavirus and locust plagues are simultaneous “pestilences” that are now stalking the world. Major locust plagues scan easily result in famines. Even the coronavirus prevention measures are threatening the food supply of nations. I’ve seen reports on televised news channels that the closure of most of the USA’s restaurants has resulted in such lessening food orders from them that food producers are discarding large portions of their harvests due to lack of demand. Dairy farmers are especially, hard-hit dumping huge amounts of milk down drains because no one wants it. I also saw one news segment of a huge tomato farm (in California I think) with a huge harvest of tomatoes ready for the picking. However, due to a lack of demand from forcibly-closed restaurants, the farmer was facing financial ruin as he let his crop rot in the field. This is likely happening to many vegetable, fruit and nut harvests. If a significant part of America’s harvest of such food crops is lost, I think we will in the future, rue the day when coronavirus-related decisions were made which significantly reduced America’s food supplies as an unintended consequence.

If we are truly entering the time called “the beginning of sorrows” in Matthew 24:8, brace yourselves. If we are at that juncture now, worse things are coming in the future. Mankind could short-circuit the prophesied cycle of increasing plagues, wars, and natural disasters by repenting to our Creator about our collective and personal sins, but that action currently seems to be a very unlikely possibility.