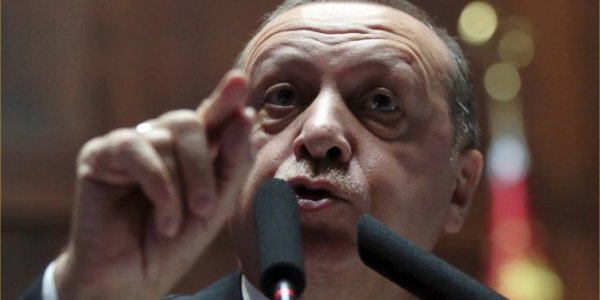 In the very war-weary Mideast, new fighting has broken out as a result of Turkish military forces invading Northern Syria to attack Kurdish forces holding territory along the Syrian-Turkish border. After notifying the USA that it intended to invade Northern Syria (first link), Turkey has launched an initial thrust into Northern Syria near the town of Afrin. During the recently-held meetings about North Korea in Vancouver, Turkish and American leaders reportedly had a tense discussion about the Turkish plans to invade an indeterminate distance into Syria to attack the Kurds (second link). The Kurdish forces in the Mideast have arguably been the USA’s most valuable allied fighters in driving back ISIS after President Trump took office. The USA would be ill-advised to betray its Kurdish allies after their stalwart and valuable service vs. ISIS. The USA has reportedly supplied its Kurdish allies with man-portable, air-defense batteries to shoot down planes and helicopters who attack them–which enrages Turkey (third link).

Turkey’s invasion into northern Syria has begun; however, it appears this will not be an easy incursion for Turkey. The fourth link offers a good analysis of the role of Russia in the Turkish-Kurdish confrontation, and it includes a very worthwhile video-link showing some of the fighting in this Turkish-Kurdish battle. After showing what appears to be an artillery battle between two distant forces, it shows what is described as a Kurdish soldier shooting down a Turkish helicopter with an anti-air shoulder-fired weapon. However, the weapon that shot down a Turkish helicopter is identified as a Russian-made air defense weapon, not an American one. The fifth link offers footage of a Kurdish anti-tank weapon destroying a Turkish tank which is the second one in an armored column (this tactic virtually dooms the leading tank as it cannot withdraw on the narrow mountainous roads in the region). The sixth link reports that Kurdish forces are repelling Turkish military forces in this engagement. Obviously, I cannot guarantee the accuracy of such reports, but I offer them to readers for their information.

There is little doubt that Turkey’s military has far more overall military resources than the Kurdish forces, but Turkey’s ambitions in the region face two massive constraints. The first is that Turkey is a NATO ally and it not only risks alienating the USA but it also risks being drawn into military confrontation with the USA as American units are often embedded within Kurdish units. Also, NATO is a defensive alliance, and its members have no obligation at all to assists a fellow NATO member if it launches an aggressive war (as Turkey is now doing in Northern Syria). Secondly, Turkey risks also alienating Russia as Russia has historically enjoyed positive relations with the Kurds (second link), and Russia has no desire to see any Turkish military force invading into the territory of Syria, ruled by Russia’s ally, President Assad. Russia intervened inside Syria to protect Assad from rebel forces fighting to unseat him, and Russia is likely to have a very dim view of Turkey entering Assad’s Syrian territory. Because the Kurds have been faithful comrades-in-arms with American forces vs. ISIS and because the Kurds have demonstrated no desire to overthrow Assad or fight Russian-backed Syrian forces, Turkey risks alienating both Russia and the USA and further risks getting entangled with the military forces of both Russia and the USA if it persists in invading a part of Northern Syria. The fact that a Russian-made, anti-air weapon was shown shooting down a Turkish helicopter in the fourth link sends a warning message to Turkey that Russia has also supplied the Kurds with weapons to shoot down Turkish planes and helicopters. If the anti-tank weapon in the fifth link is also a Russian weapon, it sends a strong visual message to Turkey that it faces an unknown number of sophisticated anti-tank weapons to use against Turkish tanks and armored vehicles if they persist with their invasion.

It gets even more complex. Turkey has plans to buy a Russian-made air-defense system which alienates NATO, but it is just such a Russian-made air-defense system that may start shooting down Turkish aircraft if they insist on entering Syrian airspace. What is Turkey’s motive in taking this action? Turkey’s animus vs. the Kurds is well-known and long-standing, but the Kurdish forces fighting ISIS inside Syria and Iraq have taken no action vs. Turkey and were not likely to do so given their ties to American forces. It is my opinion that Turkey had hopes of regaining some of its former Ottoman Empire’s territory if Assad had fallen and ISIS had carved out a large swath of its own territory inside Syria and Iraq which Turkey then intended to acquire control of. When Russia entered into Syria in force and propped up Assad and when Donald Trump won the US election and proceeded to crush ISIS, any such Turkish hopes were dashed. Perhaps the Turkish incursion into Northern Syria was an attempt to add a slice of the former Ottoman territory to that of modern Turkey or at least to minimize the region under Kurdish dominance along Turkey’s southern border.

The seventh link supports the viewpoint that Turkey desires to reconstitute at least some of the old Ottoman region under its rule. Turkey has bought from Sudan the rights to an old Ottoman-owned island in the Red Sea. It is in a strategic location and Turkey intends to make it usable by Turkey’s warships. That island is positioned to control access to the southern approaches to the Suez Canal operated by Egypt–so this action by Turkey will almost surely alienate Egypt. Why would Turkey do this unless it wanted to assert control over former Ottoman-controlled parts of the Mideast?

These developments shows that, as ISIS is removed from the political equation of the Mideast, a new set of political complexities is supplanting the old quandaries in this region. This situation bears watching, but we are, I think, witnessing a new stage in the competing efforts of the Great Powers and the local Mideast nations to control territory and exert maximum leverage over the region. As of this writing, it appears that Turkey is playing a dangerous game. Current developments argue that neither Russia nor the USA want Turkey’s forces inside Northern Syria at this time, and I’ll bet no one wants a Turkish base in the Red Sea.